When we were Kings X 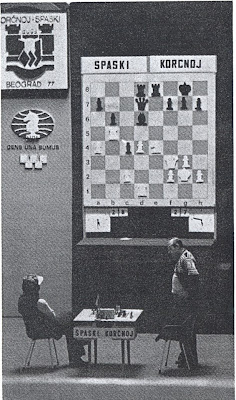 I enjoyed EJH's post on the video for Manic Street Preachers' (It's Not War) Just the End of Love last Sunday. I liked the vid too, I have to say. Sure, they got themselves in a muddle over who was supposed to be who, and, yes, the chessboard continuity was all over the shop, but I thought it was a good watch nonetheless. If nothing else, it's a reminder that chess in the 1970s retains a cultural resonance that the game today can only dream of.

Michael Sheen's mannerisms were right on the money - he actually looked like somebody who was playing a serious game of chess as opposed to looking like somebody who was trying to look like they were - and, the far-too-modern-looking demo aboard aside, I thought they might a very decent fist of portraying the spartan look of Soviet-era chess. The Manics' "classic Seventies chess match" (Nicky Wire) doesn't look so very different to the Korchnoi - Spassky Candidates' Final held in Belgrade from November 1977 to January 1978.

Have a look at the photo at the head of today's blog. Check out the plain, functional, table and chairs; check out Korchnoi's 'your-great-granddad-would-have-worn-this' cardigan; check out a real 1970s demo board: as dated in feel as the Manics' is contemporary. The Manics' demo board wouldn't look out of place at the London Chess Classic (although the manual moving of the pieces would). Korchnoi-Spassky's, on the other hand, is exactly the sort of thing that you'd expect to see at an event that had cars like those in the picture below parked outside the venue.
That's the 1970s for you: metaphorically, and often literally, black and white film. As I write these words, I recall that the first FA Cup Final I watched in colour was Ipswich v Arsenal, played, when I was nine, just a few months after Viktor and Boris finished up in Belgrade. 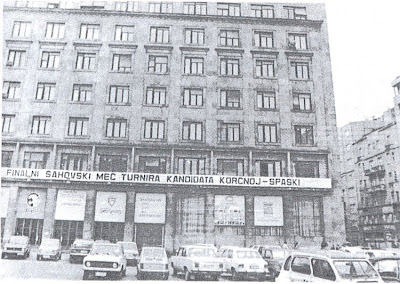 Fact: When we were Kings everybody drove Ladas

Anyhoo, now that we've had our fill of '70s Communist Austerity Chic, let's take a closer look at Boris Spassky. Did you notice that he's wearing a sun visor? I wrote about this last November [WwwK IV]. For reasons still not entirely clear (perhaps to protect his eyes from the theatre's overly bright lights, perhaps to block attempts to hypnotise him), for the final games of the match Spassky took to wearing a sun visor and/or swimming goggles during play. I know it sounds utterly preposterous, but it's absolutely true.

As you can see, the photographer has caught Spassky studying the demo board at the back of the stage. That's how he played the second-half of the match: he preferred looking at the giant board and didn't care to analyse looking at the chess set on the table in front of him.

I wish I had a better photograph of Boris and his extravagant eyewear, one where his gaze is not directed away from the camera, but this is the only one I've been able to track down thus far. Still, looking at it again after EJH's post, I saw something I hadn't noticed before. It's Black to make his 28th move. Black to play his 28th move and yet Spassky is already wearing the sun visor.

I talked about game 14 of the Korchnoi-Spassky Candidates' Final, in WwwK III, ending the post with this ...

The session neared its end and with the shortage of time forcing both players to actually remain at the board for a change everybody was waiting for Spassky to make his 31st move. Little could anybody have known that he was about to crank the weirdness dial all the way up to eleven.

... before continuing the story in WwwK IV with a passage from Ray Keene's book on the match (Korchnoi vs Spassky: Chess Crisis) :-

"Spassky now caused an uproar in the audience by appearing on the stage wearing, for the first time, a large bright silver-white sun visor. Korchnoi reacted by demanding the curtains be drawn across the stage, thus screening the players from the audience which had been thrown into tumult by Spassky’s behaviour."

Raymondo's note appears in the book after Black has made his 30th move (... Rf8), but the photo shows his timing - and therefore mine - must be wrong. Not a huge mistake, for sure, but as the Manics will tell you, it's always worth trying to get the little details right.

Enjoyed playing through the game. The Na5 manouver looked strange to me.

Korchnoi - Spassky demo board borrowed from Staunton Memorial circa 2009, surely.