When we were Kings XVI 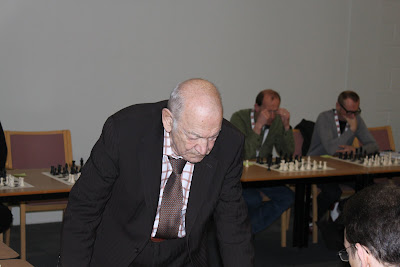 Simuls. Don't we just love them? It's funny really: clearly in terms of a test of the amateur's chess strength a simultaneous display is entirely meaningless and yet they remain incredibly popular. I'm not sure it's that difficult to work out why, though. They're great fun.

Personally, I had a marvellous time at the simuls that GM Chris Ward gave at the S&BCC a few years back - even the one in which I was the first to throw in the towel - and, judging from the Korchnoi events at the London Chess Classic, it seems I'm not alone in my affection for them. Even at £40 a ticket, yesterday's Korchnoi simul was sold out a long time ago. As was last Thursday's and as were the two he gave in 2009 for that matter. 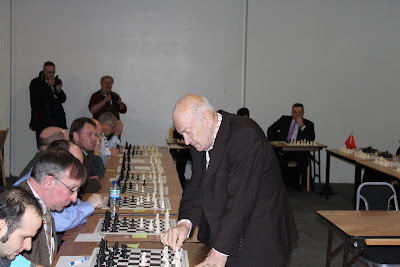 I love the concentration on the first two guys' faces ...
and has the fellow two boards in just played a French against Korchnoi?
If the chance to do that isn't worth £40 I don't know what is!
Photograph by Angus French

I mentioned last year - [WwwK VII] - that Korchnoi's appearance as the 2009 Classic's Guest of Honour led to a full-page interview in The Independent and even a nod on that day's front page. It makes interesting reading, even now, although there not being any mention of the tournament itself still strikes me as a bit of a shame. What isn't particularly surprising, perhaps, is that the simuls that Korchnoi had given weren't mentioned either. I mean, simuls aren't news, are they? Well, not now, maybe, but, as unlikely as it might seem, they were once - and front page news at that. 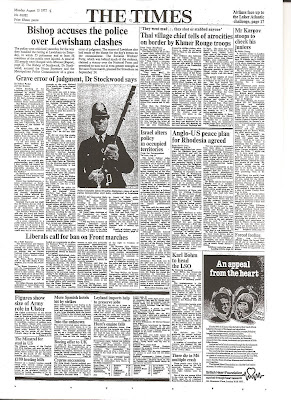 Mr Karpov stoops to check his juniors
By Robin Young

A Russian visitor to London was attacked in a crowded hotel room yesterday by 10 English boys, 20 bishops, and a handful of queens. Anatoly Karpov, the world chess champion, was pitting his skills in a simultaneous clock game against 10 of England’s best under-17 players.

He has proved virtually invincible since he took the world title in 1975, when Bobby Fischer defaulted. In 11 tournaments since, he has won nine, an unprecedented run of victories for a reigning champion.

His opponents were drawn from the most brilliant generation of juniors Britain has produced. Four had qualified for the British men’s championships and were playing Karpov on their rest day from the finals at Brighton.

Mr Brian Walden, the former Labour MP for Birmingham Ladywood, and erstwhile West Midlands junior champion, opened the match, in a stuffy room at the Londoner Hotel, and assured Karpov he would not have an easy time.

The English boys had been briefed by Mr Leonard Barden, London Evening Standard chess correspondent, on Karpov’s games, particularly the dreaded Karpov variation to the Sicilian defence, and had discussed strategy with Mr Robert Wade, the chief national coach.

“I was very worried”, Mr Wade said, “when Daniel King [aged 13] asked me what Karpov would do in reply to a Pelikan variation. That is something that has been particularly strongly analysed in the area of the Soviet Union where Karpov originally comes from, the Urals. I would not like to have tried it.

As the games got under way, Karpov, wearing a blue suit with draped jacket and wide flared trousers, seemed the only cool person in the room. He finished several rounds of moves so swiftly that he was able to sit down and take a rest while all his opponents were pondering what to do next.

Nigel Short, the world’s best 12-year-old, playing board number one, opted for the Morra gambit with which he defeated Jonathan Penrose at Brighton last week. Perhaps as added gamesmanship, he also pointedly studied a chess article in a copy of Soviet Weekly from time to time.

He survived 59 moves before giving up hope of a draw and had the distinction of making the world champion pause long enough to draw up a chair and study the situation.

Meanwhile, Tony Williams, aged 16, of Clark’s Grammar School, Guildford, found himself offered a draw by the world champion on move 24. Williams, who had chosen the English opening, felt he had a sleight advantage but probably not the knowledge and experience to hold it. Wisely, in the experts’ view, he took the draw, and with it the Lloyds Bank Junior Trophy for the best game of the day.

Top stuff. By the way, that Tony Williams mentioned at the end there? That's GingerGM Simon Williams' brother that is. 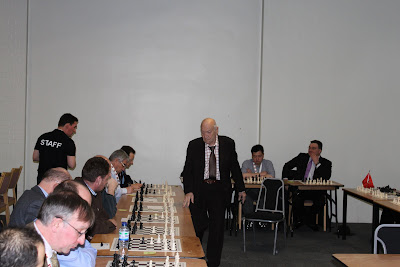 Viktor's on the way
Photograph by Angus French

Anyhoo, is it me or has this year's London Chess Classic got more coverage in the general media compared to 2009? We've had David Howell on Radio 5 Live (see Monday's post); Magnus Carlsen in The Guardian's Sports Section (Small Talk) and Magnus once again in The Daily Telegraph telling us about his Perfect Weekend*.

The publicity the Classic brings chess is positive development, for sure. I'm guessing that the Korchnoi simuls won't be an addition to the list, but while the folk who took him on probably won't be seeing their names on the front page of The Times like Nosher, Danny King et al, I'm sure they all thoroughly enjoyed themselves nonetheless.

Late Update:-
Some games from the first Korchnoi simul (+20 =4 -1 for the Viktor) can be found here. 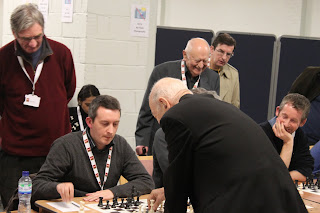 Not sure how the game turned out but we hope to have an update from Gary asap.

* I can't remember who it was who tipped me off to Magnus' Telegraph interview. I thought I'd seen the link on the EC Forum, but if so, I can't find it now. Anyhoo, thanks to whoever it was, and apologies for not naming you here.

i'm the speccy one in the top picture!

it's the most fun i have ever had that didn't involve nudity or drugs. in fact it was more fun than most of the things that have involved nudity and drugs!

I recently lost to one of the Karpov simul players R. Holmes. Somehow I remembered he played in it (have got the games in the back of a book on Karpov). Have beaten Karajkin as an adult (me not him!) and as a junior drawn with Polugaevsky and Krogius (we got down to king v king and I offered him a draw as a joke- he failed to see what was funny, miserable bastard). Lost to Hort.
We have a simul at Watford given by the club champion. Its a pretty good idea and everyone seems to enjoy it.
Korchnoi was speaking very loudly just prior to his simul on Tuesday, disturbing the FIDE open in the same room. The people with him didn't ask him to be quiet but added to the noise.
Andrew

Hi Darren,
thanks for dropping by.

I love the comment about playing the French against Korchnoi. I had the temerity to try it myself in the Tuesday simul - £40 for about four and a half hours of full on battle with the leading expert in the French seems fantastic value to me...

Towards the end, Viktor said to the chap on the next board: "Oh - you play chess do you? I had forgotten..." There were quite a few comments like that - but all good-natured. A class act.

I played Korchnoi on the 2nd night and had a wonderful evening. It was great to see him in the flesh and amazing he had the stamina to play 5hrs on his feet without a break. He'd just come from the commentary room where he had correctly predicted the Adams-Anand middlegame plans and it was obvious that he just loves chess. He also had the showman with a lot of very droll but not unkind comments.

I was one of the last two games to finish (only because we were about to be kicked out of the building and was lucky enough to get a draw. I believe the 2nd score was +23 =3 -3.

All in all a great experience and well worth the trip down from Scotland.