Did they mean compulsive?

As this is a day for unimportant things, for trivia, I thought I'd be a good day to mention this curious story which appeared on the BBC website earlier this week, noting that Armenia was making chess a compulsory subject on its school curriculum and wondering whether Britain should follow suit.

I can't have been entirely alone in shouting "no" as soon as the question was put, nor even in making a seasonal invocation of Our Lord immediately beforehand, an invocation I nearly repeated when the world's leading chess columnist was invited to favour us with his opinion. To his credit, Ray did stop short of approving the suggestion of making chess compulsory, though he did say that


if a child is good at six, they could be a grandmaster by the time they are twelve

which I'll file under "things Ray says that while highly misleading are not quite untrue", since so far in history it has happened precisely once.


a big supporter of chess being made compulsory at school

although as it happens the story doesn't quite seem to back up that claim, continuing


and recently made a submission to the government's National Curriculum review. It recommended that one class of chess - "or other thinking games like bingo" - is made mandatory every week for children in Year 2 (aged six) or 3 (aged seven).

Personally, I don't think I've played bingo since I was about that age, but I digress. I hope Malcolm doesn't seriously want to make chess compulsory in schools, since it would put him in the position of being the least sensible person in a group including Ray Keene and Chris Woodhead. 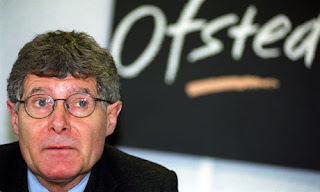 Well, Melanie Phillips likes him
Not that the question is any more than academic. Chess compulsory in schools? "And monkeys might fly out of my butt", as a noted American cultural commentator once put it, and indeed this story seems to have emerged from somewhere dark and obscure, since despite the present Government's liking for ridiculous ideas in education, I will obtain the Grandmaster title before any such thing occurs. And a good thing too.

Apart from the practical impossibility of the idea - where are all these chess teachers going to come from? - it baffles me that some people who love the game of chess manage to persuade themselves that the way to make the public love it, too, is to make them play it. I entertain similar thoughts about compulsory sport in schools: being somebody who loves football, I fail to see the value of giving people a lifelong hatred of the sport by forcing it on them as children. But at least they know what football is. 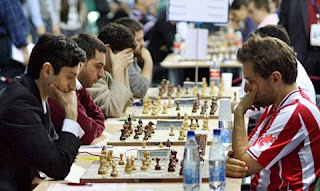 Some people like both
As it's not going to happen, it's probably not worth the time it would take to expound in depth what a bad idea this is - please feel free to use the comments box should you wish to do so, or for that matter to dissent. (I shall be working in a school all day, so my response may be somewhat tardy in arriving.) What struck me as odd about the story - apart from its implicit implausibility - was that while a decently-researched and written piece, it was yet another BBC story about chess without any actual chess in it.

Which is its privilege. There are other priorities. But it does mean that among the reasons why it would be absurd to make chess compulsory in schools, might be this: that when they see it on the timetable, the kids may well say "Chess? What's that?"

In a way it's not surprising that the BBC produces a chess article with no chess in it.

What has happened increasingly over the past 15-20 years is that parents and teachers, for the most part, want their children to do chess because they perceive some extrinsic benefits and have little desire for them to become strong players. They also want to start children young because they believe that young children benefit more from learning through games than older children.

Meanwhile, many members of the chess community, unaware of this, also want children to start young because they want to produce 'prodigies' and grandmasters (RDK's comment is very typical).

This also begs various questions like do we really want to produce a small number of prodigies or a larger number of 'average' players.

By the way, Munificent Malc tells me he was misquoted about bingo.

Chess is already taught to some primary schools in France (about 4) and in Australia at the prestegious Somerset school in Queensland. Basically, the children play chess most of the time so love it compared to history or maths.

Chess is already taught at primary school lvel in France 9about 4 schols including Charleville-Mezziers. In Australia the prestegious Somerset School in Queensland have lessons from a chess coach. Basically, the children have some tution and then play games against each other. Compared to maths or history they always choose chess at the best lesson. Obviously, because it is like a free lesson but it can't do any harm.

I think some parents think that if they expose their children to things like chess from an early age that they will produce 'brilliant minds' but as Richard James says, they might not necessarily want them to be brilliant players. It's like the CDs of classical music you can buy especially for babies and children; the intention is not necessarily to produce great musicians.