A Literary Reference : The Tempest 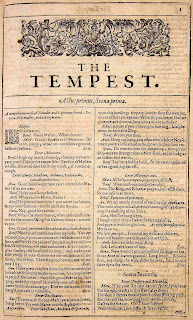 
I perceive these lords
At this encounter do so much admire
That they devour their reason and scarce think
Their eyes do offices of truth, their words
Are natural breath: but, howsoe'er you have
Been justled from your senses, know for certain
That I am Prospero and that very duke
Which was thrust forth of Milan, who most strangely
Upon this shore, where you were wreck'd, was landed,
To be the lord on't. No more yet of this;
For 'tis a chronicle of day by day,
Not a relation for a breakfast nor
Befitting this first meeting. Welcome, sir;
This cell's my court: here have I few attendants
And subjects none abroad: pray you, look in.
My dukedom since you have given me again,
I will requite you with as good a thing;
At least bring forth a wonder, to content ye
As much as me my dukedom.


Sweet lord, you play me false.


No, my dear'st love,
I would not for the world.


Yes, for a score of kingdoms you should wrangle,
And I would call it, fair play.

From memory, that's the only direct reference to chess in Shakespeare (excluding metaphors, etc).

It's also quite elusive, as it's not clear what Miranda could
mean by 'play me false' as there is no obvious way to bluff or cheat in chess.

John Mullan included The Tempest in his Ten of the Best Chess Games in literature, in The Guardian in January 2009. He says (tongue in cheek, surely) it is "The earliest evidence that chess might be a sexy affair".

Andrew Waterman in The Poetry of Chess (1981, Anvil Press, London) comments re. these lines: "This, at the moment of reconciliation between the pair, presenting chess as a paradigm of the deviously ambivalent love-relationship, implies a shrewd understanding of the game, as well as of human psychology".

He means, doesn't he, that in a game, players can be "deviously ambivalent".

Matt: are you really sure you've never been bluffed in chess?