The Interesting Sacrificed Exchange is a series that I've been trying to get off the ground ever since I wrote One for Tom nearly a year ago. After a few posts that featured exchange sacs in various ways - A collection of Dutch bits and bobs; RCP VI; RCP VII; EJH's My favourite moves XII - I finally got around to the original TISE last October, but I'm afraid the planned monthly updates never quite happened.

Anyhoo, better late than never.  From now on there'll be one a month until the end of the year.  That's a promise.  Maybe.


In this book, we are not concerned with [an ISE] if it is immediately followed by a mating attack, or by the achievement of material superiority. For this reason, the term ‘positional exchange sacrifice’ is sometimes used to indicated that the exchange is given up in order to establish long-term advantages which the sacrificer hopes will ultimately repay him.

Watson may not have included today’s Sacced Exchange in his book, but it is no less Interesting for that. 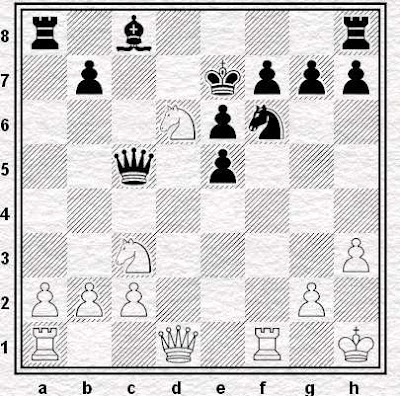 I doubt that Rxf6 would even have crossed my mind had I found myself playing White in this position before I started looking at exchange sacrifices last summer. These days, though, I’m pretty sure I’d at least be thinking about it and, given the forcing nature of the variation, I'm reasonably confident that I’d be able to calculate the first few moves too. 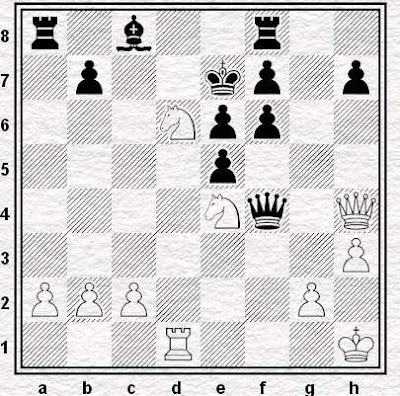 This is where I'd stumble. The position at move 22 contains a couple of points that are not immediately obvious.

The combination of these factors means that, appearances to the contrary notwithstanding, White's attack has not run out of steam.

If you were to be parachuted into this position I suspect that the process of elimination alone would bring you to the game continuation, if not the full depth of the idea behind it. What I love about 18 Rxf6 is that you have to spot the plan several moves in advance otherwise you'd never give rook for knight in the first place.

Looking at the second diagram, then, I'm not sure it's so hard to find 23 Qe1 with the idea of switching Her Maj over to the other side of the board. It’s that or resign as far as I can see**. No, the real genius here is realising in advance that you have this resource. Very easy to get here in your analysis, think “Oh, I'm not breaking through” and then ditch the idea of the exchange sac in favour of some other continuation; very hard to grasp that your kingside attack is actually preparation for an offensive on the queenside.

So, 23 Qe1! then. The game’s not over even now, but, if White is prepared to leave his own back rank undefended, ready to deal with a little defensive zwischenzug from Black and able to remember that the threat is stronger than the execution, he will win in the end. 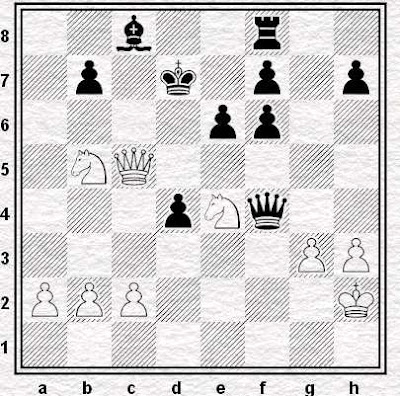 Returning to Watson's definition of exchange sacrifices, I wonder if whether exchange sacrifices of this type might not be considered positional when lesser mortals play them. Yes, it was followed by a forced mating attack and, yes, Kasparov had worked it all out before he'd played Rxf6***, but there's no way a club player is going to be able to calculate it through to checkmate. More likely, you might be looking at 18 Rxf6, get to 23 Qe1 in your analysis and think something like, 'I've given up the exchange; his king's exposed; my pieces are actively placed; his bits are poorly coordinated; I've got attacking chances ... that'll do the job'. A matter of long-term judgement, then, rather than short-term calculation.

Anyhoo, it's marvelous stuff however you look at it. It's not surprising that David Norwood considered Kasparov's exchange sac to be of the best combinations of 1991 and, the best part of twenty years later, Jacob Aagaard thought it worthy of inclusion in Attacking Manual 1.


** The Bloody Iron Monster tells me I was wrong about this. Without Qe1 the machine thinks that White still has a draw although, to my mind, it's even harder to find than the game continuation - and spotting it would probably tip you off to the idea that there was a way to keep the attack going anyway. Still, computer pedantry aside, I think my basic point stands


*** Actually, it seems as if the whole thing was opening preparation and Kasparov had seen the end of the game not just before 18 Rxf6, but even before 1 e4

I was going to say slim to none ... but I can imagine playing 12. e5 not noticing that Black could play ... Nxe5 in response. Then I'd be locked in to things until my 14th move. What choice is there? Something has to go to b5. I might be more likely to be trying to put a knight there though, rather than realising that I need to get the bishop off the d-file.

Y'know, one way of interpreting this position is that twenty years later, Anand is world champion while Kasparov is performing simultaneous displays for dubious American political foundations.