There's been a few controversial changes, in recent years, in how FIDE expects chess, and chess tournaments, to be run. Faster time-limits, zero default times, proposals for drug testing. I've been sceptical about all of these, albeit perhaps less so than some others. However, the latest proposal - to eliminate opening preparation by having the opening few moves selected by computer, just before the game - strikes me as gimmicky, counter-productive, and wrong.

I understand that, as with all FIDE's questionable initiatives, there are justifications for the idea. Yes, players spend too much time and energy preparing for individual opponents, and they might play better chess if they are relieved of this burden, and therefore arrive at the board fresher. Yes, the public might like to see the players struggling with unfamiliar positions rather than starting the game twenty-five moves down the track - if, indeed, they don't shake hands at that point and go back to their rooms for the next bout of preparation. Yes, there are lines - the Petroff, say, or the Berlin Wall - that a lot of chess fans don't like to see, and if chess is to entertain then perhaps there ought to be more Sicilians and Semi-Slavs. Yes, I know that a similar system operates in Draughts. Come to that, I know that there are such things as theme tournaments. 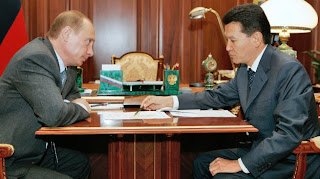 Next thing they'll probably take away the board altogether
But for all that, it's unnecessary, against the best of our traditions and subject to all sorts of other objections. Who is really going to select these openings? The computer? Would you trust a computer appointed by FIDE?

Can we really be confident that players close to Kirsan and his cronies won't find themselves coincidentally playing openings that they just happen to have studied the night before, while those identified with the Karpov/Kasparov faction find themselves playing crucial games in totally new territory? Even if this doesn't happen, won't all the players be so suspicious of one another - particularly in the present climate - that they'll all be sure that their rivals are getting inside information?

Besides, on what basis are the potential openings going to be selected? It's still not entirely clear to me. Are we always going to select variations generally agreed to be equal, generally agreed to give a small White advantage, or what? Are some people going to sit down to find themselves already holding a losing hand? Are we only going to choose from recently-popular variations, or the whole of chess history? From grandmaster practice or from all levels of chess? From variations that are perceived to be exciting rather than variations perceived to be dull? 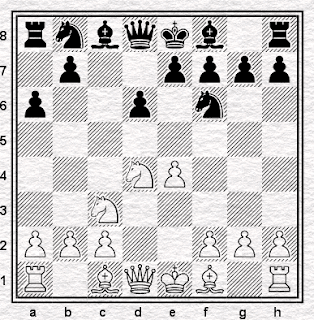 No to the Najdorf
Besides, do we really want a surfeit of Najdorfs? Some of us actually like the Berlin Wall. And the Petroff. And I'd rather see players defending openings on which they've expended hundreds of hours of their own research and experience, rather than swimming around in unfamiliar waters like the rest of us.

Talking of the rest of us - is it what we want? What happens when this idea becomes standard, and we have to sit down at board 350 of some tournament that happens to be FIDE-rated, and play something that we've deliberately spent thirty years avoiding, just because some computer tells us to?

I say no to this nonsense, and I would urge other people to do likewise. Please write (email webmaster@fide.com) to the FIDE President - you can also contact FIDE through Twitter - urging that this proposal be abandoned.

Today the Najdorf - but tomorrow, what next? The Sokolsky? The Portuguese Gambit? Fool's Mate?
Posted by ejh at 7:55 am

I imagine Kasparov - who, thanks the PCA 'openings selectors', found himself defending a dubious position in the King's Gambit during the theme games played at the fag end of the 1993 World Championship - would not be in favour of these proposals.

Would you approve of this system if each position was played out twice by each pair of players - alternating colours?

What is today's date?

I've been looking around for the original story. It doesn't surprise me it's just I can't find it.

It looks like you've been scooped again by that rival Chinese chess news site - The Wok In Chess - they had the story days ago. www.twoc.com

Duh indeed. At least T.C. and M.C. followed me.

Doh! I didn't look at the calendar and John Saunders made me look too! I'm a busy guy you know 8-)