Every Picture Tells A Story: Leeming Plays A Blinder

The 9th in a series of collaborative posts. This one is a two-handed effort by Martin Smith and Richard Tillett.

There are three games in progress in Thomas Leeming’s depiction of the gentlemen of the Hereford chess club. The two in the background are largely obscured, but the one in the foreground is pretty clear. The artist earned his crust mainly as a painter of miniatures - tiny portraits executed with the finest brushwork - and here he has used these skills to show the chess position in remarkable detail.

In the two principal versions of the picture, the foreground player with the white pieces is Edwin Goode Wright. You can see him on the right in the ‘Hereford’ version: 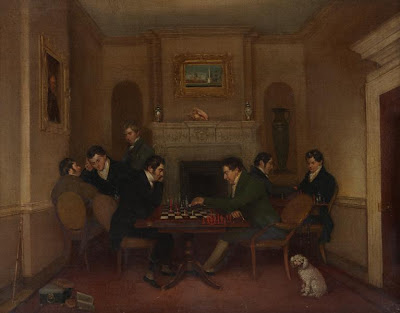 Here the black pieces are played by Samuel Beavan (actually they are red pieces but let’s not quibble), although in what we call the ‘Greenlees’ version (which you can see here) Leeming has substituted James Buckton for Beavan.

We can do some zooming and cropping to work out what is happening on the board. Here is the ‘Hereford’ version, using the latest high resolution image that the Hereford Art Gallery has kindly sent us: 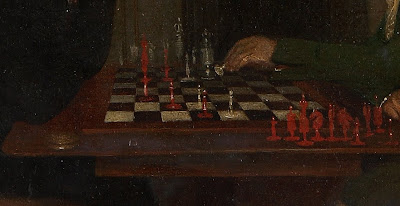 The best view that we can get of the ‘Greenlees’ version is from the scan we took of the reproduction in Mario Praz’s book (as we haven’t yet located the whereabouts of the original). Unfortunately it is flawed by the two-page spread - the join in the middle obscuring White’s fourth rank and the pawn on a4 - but here anyway is the equivalent to the ‘Hereford’ crop. 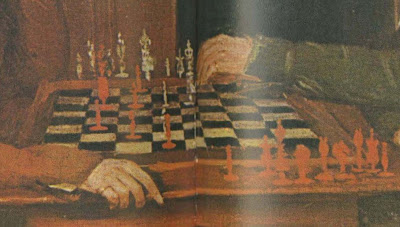 The details in both are astonishingly clear, especially when you consider that the real size of the painting of the chess board is only a little over three-and-a-half inches wide. You can see each square and piece, picked out as if in HD, and you can’t help but notice (in the second, anyway) that each player is wearing a ring. There is also exact correspondence in the chess positions in the two pictures. Even the red pieces off the board match one-for-one in the two versions.

Here’s our reconstruction of the position. 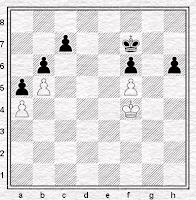 It is a real position, and we like to think that Leeming was himself a player and so took real care to accurately represent a game in progress. But the position as shown above is not yet complete because in his left hand Edwin Goode Wright is holding what is clearly a pawn, and is about to make a move. His hand hangs over the centre of the board, suspended in eternal ambiguity. So the question is this: is he just making a move - any move - of no particular significance; is he about to execute the coup-de-grâce; or could he be about to throw the game away?

Let’s start with his and his opponent’s facial expressions. Could that be the ever-so-slightly-smug expression of a man confident of victory? (Your bloggers know this expression well as we see it so often on our opponents’ faces.) 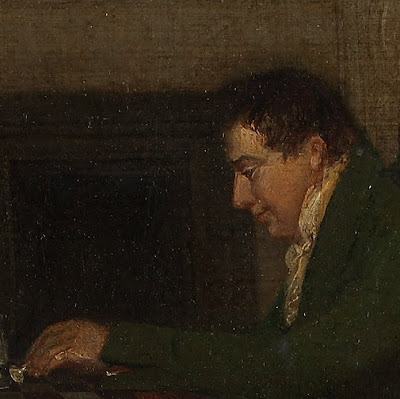 And could this be the expression of a man coming to terms with imminent defeat? 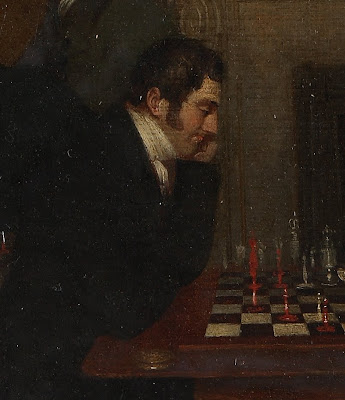 If EGW is indeed about to make the winning move, then where is the pawn heading? From the position of his hand the pawn is advancing down the e-file, isn’t it? And if it is heading to e6 that would guarantee the win, wouldn’t it? This interpretation of the position invites us to imagine EGW, who may have commissioned the picture (a point to which we will return in a future blog), showing it off to his friends, and proudly explaining how he won the game with the e6 advance. 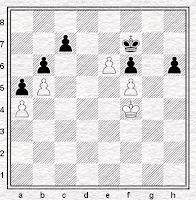 But suppose that the expressions are those of two players concentrating on a position where the outcome is as yet unclear to them both.

In this narrative the pawn may not heading for e6 at all, and other outcomes to the game might be envisaged. Then, if you were Beavan (or Buckton) telling the story after the event, from the Black perspective, you would want to relate in graphic detail how, after our opponent had played that pawn to e5 and allowed the exchange on that square, your passed h pawn had secured victory. 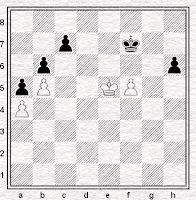 Leeming, consummate networker, that he was, has cannily shown a position so ambiguous that neither player would feel upstaged. Knowing that it would be peered at and picked over, perhaps he has deliberately left the whole thing unclear, and created a position that either side could claim to their chess-ignorant friends to be winning, without fear of contradiction from any chess buff peering over their shoulder. It was Leeming who played the blinder.

Thus Leeming can add yet another talent to his CV alongside miniaturist, copyist, and chesser. He was also a master of not making enemies, working his clientele with subtle flattery so as to advance his prospects of further commissions.

As if to make the point that he is the puppet master discreetly pulling the strings, he has put himself, retiring from view, in the background of the scene.

actually they are red pieces but let’s not quibble

Isn't it potentially quite an interesting quibble though? I say so because in Through The Looking Glass, published several decades after this game was played, the colours are White and Red, not White and Black. When did it become entirely established that the colours - whatever they actually were in any given set - should be referred to as White and Black?

Ejh, curiously we encountered another aspect of the red/black issue last Autumn when the third version of the Gents turned up at Christie's.

When we went along to view and consult one of their experts, the tables we were turned. He (who had seen more antique chess sets than I've had hot dinners) wondered if we could help explain why the colour red gave way to black as standard.

... This is about the materials used for the chess pieces, I think.

Until the second half of the nineteenth century, most sets produced in England were made of bone or ivory, materials which could easily be stained. The White pieces were left in their natural, unstained colour while the Black pieces were given a contrasting stain, with red being by far the most popular choice. Other colours, such as green, brown and (occasionally) black were also used, though you see these colours mainly on imported sets.

Wood was used more widely as the 19th century progressed. But wood doesn't take a coloured stain as readily as bone and ivory, so the turners who made the sets used different woods to provide the necessary contrast. In high quality sets, pale yellow boxwood would be used for the White pieces and dark, near-black ebony for the Black pieces.

Sets of Staunton design, which first appeared in the middle of the century, were for several decades produced in both ivory (with Black pieces stained red) and wood (with Black pieces in ebony). Eventually ivory fell out of favour, probably for cost reasons.

Thanks, that's really interesting. I wonder - do you know whether that change was reflected in any conventions when chess was discussed in print? Was there a point when it became conventional to refer to "White" and "Black" when listing the laws, or reproducing a game, or giving a variation (or whatever it might be) and similarly, was there a point before which people did not necessarily do so?

Of course, you can still get pocket sets with white and red pieces to this day ;)

I'm wondering whether the reference to Red pieces in Through The Looking Glass may be 'literary licence'. I've just browsed through a dozen or so early chess books from 1790 to around 1890, which have been digitised via the Chessville website, and in all of them the Black pieces are referred to as Black (or B) rather than Red.