There is a chess book that does not exist, the dimensions of a big old wooden chess board, its cover plated with gold, and on some distant desert island the thick parchmenty pages waft past with a slow, comforting wump; a hand-drawn diagram here on the left, delightful and original prose descriptions on the right, the occasional letter endowed, even, with a calligraphical flourish.

Here is one such position. White to play and win. 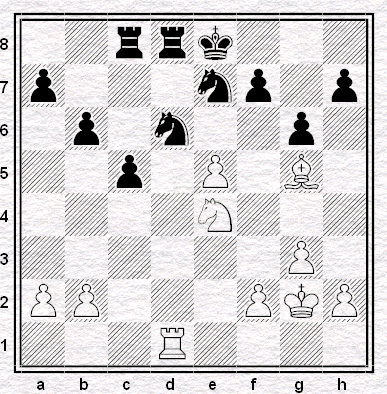 No doubt you solve this one yourself, but you are not reading this book just to solve puzzles. Instead your eye turns from the diagram and you begin to read:


Today's position is a little shy. She's a demure librarian wearing trousers, sensible shoes and a buttoned-up blouse. In other words, it looks like there is little chance of mate in the near future.

By contrast mating puzzles usually advertise their availability. We are talking hyper-short skirts, vertiginous high heels and cleavages that you could park your bicycle in. We can normally spot a mating puzzle because the black king is stalemated, his pawn cover is shattered and we have lots of heavy pieces nearby.

But not today. There are no queens and white's rook is a long way from the action. The only attacking pieces we have are a knight and a bishop, which on their own are never enough to deliver mate. Black's king is surrounded by defenders and he isn't stalemated. It all looks very safe. All is safely buttoned up and, although you can't see it, you just know that she is wearing sensible, unexciting and capacious white undergarments about her nether regions...

But even librarians can have hidden wells of passion. She may be encased in tweed like a medieval knight but for all we know the aforesaid undergarments might be racy little red and black wispy strappings from Agent Provocateur.

So how do you seduce a librarian?

Or at least so says chessgames.com kibitzer Once (diagram example from this game) who has been posting his funny, quirky takes on chess positions for over a year now. Time for a book deal? I can certainly think of a title.
Posted by Tom Chivers at 11:11 am

I hate to admit it, but I'm starting not to be annoyed by those 'jump to the article' mouse clicks.

Perhaps they are not (always) unnecessary after all.

Does this librarian resemble Sophie Aldred in any way?

So how do you seduce a librarian? Or at least so says chessgames.com kibitzer Once (diagram example from this game) who has been posting his funny, quirky takes on chess positions for over a year now.

A qualified librarian writes: if there are funny ones, have you considered linking to any of them?

ejh: Apologies if I caused offence. It's just a bit of whimsy, a joke, some fun not intended as a criticism of anyone.

Maybe this one will be more to your taste?