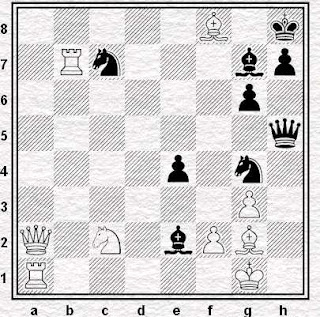 Tuesday the 5th of April was an extremely unusual day for me. A first, a long wait ended and chessboard achievement: along they came all in a row and all of them, students of coincidence might be interested to know, were in some way connected to S&BC Blog favourite Raymond Dennis Keene.

It started in the afternoon. Although I am very fond of RDK, our previous communication had consisted of the one word (“hello”) that we had exchanged at the Staunton Memorial a couple of years ago.  At 16:47 I received my first ever email from the famous RDKOBE address. It wasn’t completely out of the blue – Raymondo was kindly answering a question that I’d raised concerning his involvement with Anti Chess – but it was most welcome nonetheless.

A little bit later, I strolled down to the club for the Streatham v Red Hill Surrey League match and found myself on the White side of a Leningrad Dutch. Remarkably, just a couple of hours after receiving his email I finally got the chance to play an opening idea of Keene’s that I’d been waiting more than twenty years to get on the board. This happy coincidence would have been enough to make last Tuesday a bit of a red letter day.  There's more, though:  I won and set a new personal best for ‘highest-rated-player-that-I’ve-ever-beaten’.

That I won the game is clearly of importance to nobody but me. Of more general interest, perhaps, is That Move. 7. d5 in the main line of the Leningrad certainly wasn’t Keene’s invention, but he played it frequently in the early 1970s and remained an enthusiastic advocate of the idea well into the 1980s (e.g. see An Opening Repertoire for White, Batsford 1984).

I was pleased that Keene’s recommendation could still bring me a practical success all these years later. In the days after the game was played, though, I began to wonder about the theoretical status of that decades-old preparation. In today’s database + engine riddled chess world could it really still stand up? The answer to that question, I discovered, is yes. That old analysis has turned out to be exceedingly durable and, forty years of theoretical advances notwithstanding, it seems that 7. d5 is still worth a look even today. 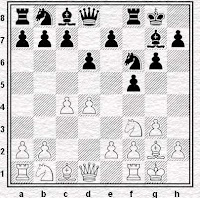 So, it's the Streatham v Red Hill match.  My game quickly reaches the basic starting point of the Leningrad variation and I am pondering my move. 7. Nc3 - the main line and clearly the most natural choice - would have copied T.C. v GM Neil McDonald, the game being played just behind me on the match's top-board. What about 7. d5, an old favourite of Ray Keene's, instead? The move I had been waiting more than twenty years to play.

In pushing the queen's pawn, White opens up the diagonal of Black's dark-squared bishop. He also reduces his options against some of Black's choices since after 7. ... c6 (or 7. ... Qe8) 8. Nc3 we are back in the main lines but with White already committed to d4-d5 (e.g. Keene-Wirthensohn, Hannover 1976: see RCP VI). In practice that's only a problem if you don't want to advance in the centre anyway, but on principle it is preferable to 'reserve the greater option' [now, who coined that term?] unless there is a specific reason not to, so what's the benefit to Keene's move? 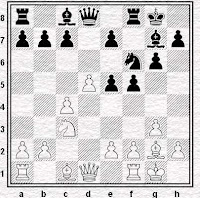 Raymondo's justification was that after the 'normal' 7. Nc3 Black could try ... Nc6, 8. d5 Ne5, 9. Nxe5 dxe5 reaching a position where s/he has a threatening phalanx of pawns in the centre. Thirty or forty years of theory later, the line might have been defanged - in Starting Out 1. d4! (Everyman 2008), for example, John Cox considers it to be "teetering on the verge of refutation" - but the pawns still looked intimidating to me and there was also 7. Nc3 Nc6, 8. d5 Na5 to consider, an idea which the aforementioned GM McDonald had suggested in a book published just six months ago.

All in all, then, reducing Black's options and avoiding ... Nc6 if I could seemed like a pretty good idea.  I was also mindful of the fact that many of Keene's opponents had responded to 7. d5 with 7. ... c5 aiming for a kind of Yugoslav King's Indian (with ... Na6-c7, ...Rb8, ... a6, ... b5 etc) but with the extra move ... f5 thrown in. My occasional fellow blogger, I knew, had scored particularly well against this set-up. 3.5/4, in fact, and against decent opposition too: Keene-Matulovic, Nice Olympiad 1970; Keene-Hindle, County Match 1970; Keene-Jansa, Nice Olympiad 1974 and the following game against a man who, several years afterwards, he would replace as second to Viktor Korchnoi.


So, 7. d5 it was, then, and, happily enough, I subsequently won the game. A couple of days afterwards I asked the Chess Pub folk how they felt the idea had aged. 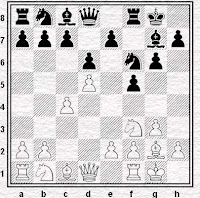 The first response I received went,

This is just armchair reasoning (and how I would think if confronted with 7.d5 in a game), so please correct me if I'm wrong!

which, as it happens, is exactly how my game had proceeded! I'd hoped that 7. d5 would give my opponent a small surprise, but he played ... Na6 and ... Nc5 without batting an eye.


Where does all this leave us with 7. d5? I suspect that the ChessPubber who described it as theoretically irrelevant is almost certainly right. Still, it's not a bad move and it is perhaps deserving a little more attention than it gets these days. It definitely has some practical value despite, or perhaps precisely because, not being mentioned in McDonald's Starting Out: The Dutch, or Stefan Pedersen's book on the Leningrad from back in 1996 (nor Beim either, according to the ChessPub thread).  McDonald's latest book, I discovered, describes 7. d5 as "annoying".  Reason enough to play it, I would have thought.

Anyhoo, I will retain some affection for the move just as long as the current game remains my highest-rated opponent beaten. Not that the opening had anything to do the with the result, of course. As you can see, I didn't play particularly well, just well enough to be hanging in there when, in time trouble, the other guy went for a mating attack that didn't quite work. Still, they all count.

Which brings me to the diagram at the head of today's blog. The game ended up finishing on move 42, but had Black sealed 42. ... Ba6 instead of ... Kg5 I might well have ended up having to travel to Red Hill to win a rook, bishop, knight and pawn against queen ending. Not that that should have been too tricky, but it would have been a drag and, moreover, it would not have been in the least bit necessary had I finished the game immediately from move 36. 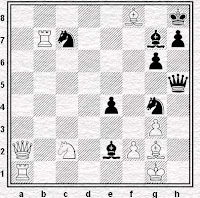 White to play and win. I'm sure the man who gave me the idea of playing 7. d5 would have found the solution without any difficulty whatsoever, but then both as a theorist and at the board, Ray could play. I, however, cannot.

Umm, dare I mention that our opponents were Redhill (rather than Red Hill).

Thanks Angus. I'd correct the main article, but (a) I'm lazy and (b) I find Red Hill quite appealing from an aesthetic point of view.

That's the start of it yes. I'd got that far when thinking during the game. I'd seen the next move too, but the (not too difficult) one after that I missed.