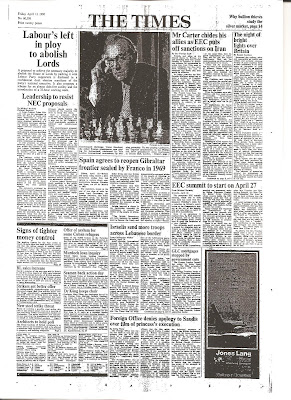 The Times
11th April 1980
(click to enlarge; click again when you get there for a very close look)

Viktor Korchnoi was quite the celeb thirty years ago. Not exactly the Wayne Rooney of his day, perhaps, but certainly a frequent guest on the pages of our national newspapers. He first hit the headlines when he defected from the USSR in 1976 (e.g. "Soviet chess grandmaster seeks asylum in Holland after Moscow criticism" The Times front page 28/7/1976, and seven follow-up articles within two months in The Times alone) and  there he stayed for a good five years. As Viktor transformed himself from Renegade Grandmaster to World Championship Challenger the press were watching his every move.  The media's interest was such that his matches against Spassky in Belgrade, 1977/78 (WwwK II, III, IV, V, VII, VIII, IX, X, XI) and Karpov in Baguio, 1978 are probably still the second and third most publicised chess events of all time.

No surprise, then, that on April the 11th 1980, the simple fact that Korchnoi was about to play in a tournament in London was considered sufficient justification for The Times to publish a picture of him at the chessboard on their front page. 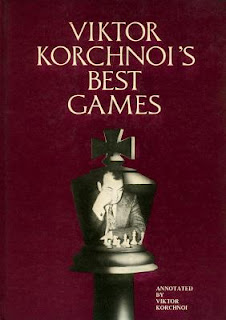 One of many - and very much not invisible

Amateur chessers were no less infatuated with Viktor the Terrible than were Fleet Street's editors. The first impression of Korchnoi's biography, Chess is My Life (B.T. Batsford, 1977), quickly sold out and three different games collections - Viktor Korchnoi’s Best Games (Philidor Press, 1977), Korchnoi’s 400 Best Games (B.T. Batsford, 1978) and Korchnoi’s Chess Games (Oxford University Press, 1979) appeared within the blink of an eye. To these tomes the avid fan could add Korchnoi vs Spassky: Chess Crisis (B.T. Batsford, 1978), Karpov-Korchnoi 1978: The inside story of the match (B.T. Batsford, 1978)* and, indeed, a brace of books on the World Championship match from authors who weren't directly involved - Karpov-Korchnoi 1978 - The Battle of Baguio City (Bill Hartston, Hutchinson & Co Ltd, 1978) and Karpov vs. Korchnoi World Chess Championship 1978 (Bent Larsen, Unwin, 1978). The British chess community, as it wouldn't have been called then, seems to have had an insatiable appetite for all things Korchnoi.

"Korchnoi has recently written a book called Anti Chess which he hopes will soon be available in an English translation."

Well yes, actually, I rather think it is.

Think about it for a moment. When books about Viktor Korchnoi were all but literally flying off the shelves, and any Tom, Dick or Harry (Ray, Bill or Bent, if you prefer) could see their name on the cover of a book if they included the words "Baguio" and "1978" in the title, wouldn't you expect publishers to be forming an orderly queue at the merest hint of a suggestion from Viktor that he wanted to tell the story in his own words? So why is Korchnoi only hopeful that the book will appear?

Why? Why did the publishers of chess literature in the early 1980s turn their backs on what would surely have been a commercial success?

We'll get back to that next week (sneak preview: the Anti-Chess story involves a remarkable cameo from Raymond Dennis Keene and, possibly, the KGB). For now, let's just give thanks for the internet and the great service it does for those of us who want to read about our favourite game. Dear old Gidders might not like it, but, at least now, should somebody here think that it's not a good idea for us to read something, we can choose to ignore them and go buy it there, regardless of where 'there' might happen to be.

* by far the best of Raymondo's 'instants' in your author's humble opinion.