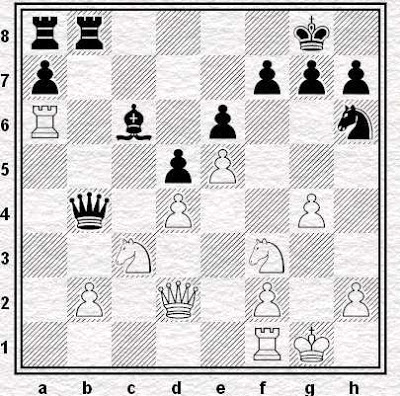 Black to  go from the middlegame directly into a rook ending


Well here we are, July already. Six months and thirty posts in. Even with one or two guest blogs, I'm still comfortably ahead of schedule to reach my target of 52 rook and pawn posts in 2013.

Not a bad time, then, to take stock. Consider my goal for the year and ask myself the Morrissey question.

Let's start with my rapidplay games. 51 of them January to June, ten of which boiled down to kings, rooks and pawns. That's not an unhealthy percentage, but actually if my experience proves anything it's that Golders Green is the place to go to if that's the sort of thing you're after.

Nine of my 36 games at Adam Raoof's monthly tournament - precisely one in four - turned into rook endgames. It could have been more, too. I'd have made it into double figures had one opponent not resigned instead of accepting a forced queen exchange which would have left him with rook plus five pawns against my rook and seven. Very annoying. 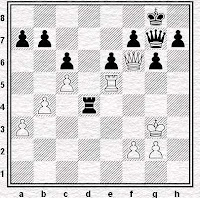 Anyhoo, my score from those ten games, sadly not counting the rook ending that never quite happened, was +4 =4 -2 at an ECF performance rating of 171 or thereabouts. That's considerably higher the 155 with which I started the year and a few points more than the figure - I think it will be somewhere in the upper160s - that will appear under my name in the summer grading list.

So, with all due respect to Mozzer's grumpy 'it makes none' conclusion, my feeling is that writing about rook endings has both led me to play many more of them than otherwise would have been the case and maybe it's even improved my results a little too. That wasn't the intention, but I'll take grading points anywhere I can get them.

No (more) apologies, then. I'll head merrily into the second half of my rook endgame year, starting with my favourite transition to a rook ending from 2013 so far. 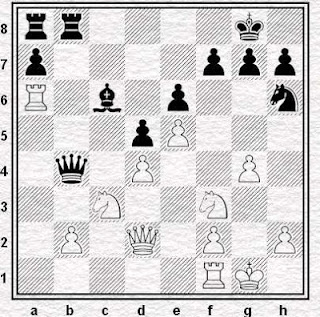 The position in the diagram is just a move and a half out of established theory. Theory that was well known to me, although fortunately not to my opponent. In the circumstances it was an exceptional effort from White to find his way to move 18 all on his own, but it left him 15-20 minutes down on the clock.

Anyhoo, with the benefit of a comfortable  time advantage I settled down for a bit of a think. Here's pretty much how it went (imagine this as a Master Game voiceover if it pleases you).


I very rarely calculate a line that long let alone see it actually materialise on the board when I do. It's just that this time that's exactly what happened ... and when I got to the end realised I was winning a second pawn too.

Happy days. Here's hoping for another six months of them.

It's worth checking the game a bit further. The computer engine suggests that had White played 23 h3, then a plan of blocking the a7 pawn with a Rook on a6 gives good drawing chances. That isn't quite a Rook ending as the Knights stay on, with the h6 Knight struggling to find a square.

It goes to show how far theory in some lines extends, which is a handicap in thirty minute minute games if you don't know it or cannot make it up quickly.

Yes a plan based around h3 to defend the gpawn rather than pushing to g5 is better. If i had this line again I'd have answered g2-g4 with ... Ne7 rather than going back to h6. I thought it would gain a tempo - which it does but at the cost of leaving the knight rather out of play.

Agree with you about the extent of theory. Frankly a middle game time disadvantage of 15-20 minutes when you start with half an hour each is going to mean you lose from more or less any position.

My opponent was rather unlucky to find the right moves for so long. He might have done better to play something inferior that would force me to think for myself. That line of the Advance is rather forcing though.

Oh, I forgot to finish the first point ... which is that I didn't mention the h3 plan in the post because it didn't occur to me during the game. I assume my opponent didn't think of it either otherwise he'd have played it.

Nothing to do with today's post but you may be interested in this video of one of your favourites.

Oh top stuff. I particularly enjoyed you telling him off whenever he was tempted to say it was all a bit dull :-)

You're quite right about 4 Bd3 c5, 5 Bb5+ transposing into an IFE with colours reversed Roger.

Glad you're enjoying the videos.

Personally I don't think 4.c4 Bb4+ is all that great for Black. The Bishop is liable to be swapped off.