After the last Knightmare! Scenarios: 4. Just Rooks, Pawns and Kings - by the Blog's guru of the third-phase, Jonathan B - our series now steps gingerly into the exotic world of Knightmare! openings. 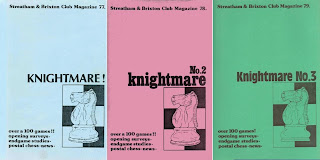 We had a foretaste in episode 2 with Ken Coates' revelation in that in the choppy waters negotiated by Streatham and Brixton's 2nd-cum-B teams you were likely to be tossed overboard unless you gambitted a pawn or two; a ducking experienced (says Ken) by Knightmare! editor Mike Singleton.

Mike (pictured then and now in episode 3) might have felt righteously miffed as has he was no slouch with novel opening variations having championed 1. d4 Nf6 2. c4 g6 3. Nc3 d5 4. f3!? against the Grunfeld for some years. The line had been (as he said in an analytical article in the first issue of Knightmare!) "very much underrated, [receiving] quite inadequate treatment from opening manuals hitherto". Even twenty years later Jonathan Rowson, in "Understanding the Grunfeld" (1999), gave it a meagre half page - proposing a rook sacrifice by Black as a refutation, which might be thought a trifle extravagant. Nonetheless, by designating 4. f3 as a "random monkey" (along with 4. h4 and 4. g4) Jonathan helpfully chimes a zoological note.

As if to imply that 4. f3 was a little slow Mike referred readers to an article in the same Knightmare! by Andrew Martin on the virtues of moving the pawn to f3 on move one (and of its counterpart 1...f6). It's "The System That Refutes Chess!" and there are two games to prove it, both against the unfortunate G.K.Sandiford of Wimbledon. In case readers were not convinced, it was followed up with a Part II in Knightmare! No.3, "due to immense public demand". This set out the "Immortal f3 game" played in the final round 6 of Blackpool 1978 (Andrew had sprinted to 1/5, with his opponent still in the blocks) where, by move 14, Andrew had created (nota bene, in view of our leitmotif) an "oyster-like set up...highly typical for this opening...White has no weaknesses", as might be seen, possibly, in the left-hand diagram below.


Knightmare! itself didn't give the diagram, in which the White King reposes as if a pearl in its protective shell. Anyone who has tried to prise open an oyster will know the hazards, and his opponent obligingly stabbed himself on move 16. Also above, right, is the final position of "The double default f3 game" ("1.f3! f6! Blast. He had obviously read my article.") scored alternatively "as 0-0", and "of such theoretical importance [that] beginners should study it carefully. The first nil-all draw in chess." According to Andrew the game appeared in the Daily Mail, Mirror, and the Sun on page 3. Once again Knightmare! thought it prudent not to illustrate the position - lest, perhaps, readers might have feared a Letraset malfunction.

Not to be taken too seriously, of course; and notwithstanding these youthful indiscretions Andrew is now giving us his excellent "Game of the Day" analyses at the 2013 British at Torquay. But it was a different kettle of fish with the "Pelikan", one of several Knightmare! hobby-horse openings, and when it came to the appellation wars over the 5....e5 move the mag nailed its colours firmly to the mast of the Czech-Argentinian grandmaster Jiri Pelikan - incidentally giving one Knightmare!ista the premise for a fully-fledged ornithological gag (see further on) upon which this post is piggy-backing shamelessly.

Yes, the "Pelikan" pure and simple for Knightmare! and not the double-barreled, if historically more inclusive, "Lasker-Pelikan" as in Wade, Speelman, Povah and Blackstock's contemporaneous work of 1978, let alone the über-fricative "Sveshnikov" (his own book wasn't published until 1988); and certainly not the "Chelyabinsk" as no-one would have heard of the place - although a meteor did eventually put it on the map. And that quip requires an apology to the shell-shocked people of Chelyabinsk and to you, the reader, for its lapse in taste; although it was but an airy waft compared to Mikhail Krasenkov's unbecoming jibe in his 1996 book on the opening where he says, referring to other works, (and with my emphasis) that calling it the "Lasker, Pilnik, [or] Pelikan variation...bear[s] witness just to [their] incompetence..." - which mars an otherwise engaging book.
And so, on to some games and notes from Knightmare! in days of yore before computers, when that whatever-it-should-be-called opening became à la mode, not least due to the efforts of the S&BCC avant-garde. When you play through this first one pause after White's 24th. It's the position that was a "guess the move" in Leonard Barden's Evening Standard chess column in November 1977, the one that gave Knightmare! a handsome plug as we saw in episode 1.

With a touch of brilliance the maestro modestly shows how it should be done; and Tim Pelling (still active in London) it was who succumbed. Indeed, Tim had the misfortune to suffer yet another pecking by the Pelikan, this time at the hands of the aforementioned Sveshnikov (as most of us now call it, except of course the alumni of the Chelyabinsk School of Chess) fashionista, Roger Emerson.

Roger commented to your blogger about the needle circumstance of this game: it was a London League match v Mushrooms in 1977 in which they "unleashed their own anti-Streatham variation involving Bd3 and Qh5" in two games; the other was Harris v Povah - which is reminiscent of the famous incident in the Gottenburg Interzonal of 1955 when three games in the same round (# 14) involving Soviet (all with White) - Geller, Keres, Spassky - and Argentinian players - Panno, Najdorf, Pilnik - featured the same sacrificial refutation (found, so it would seem, at the board) of an identical TN in the Najdorf. The three Russians GMs won, as did later the two South Londoners, and there the parallels meet their vanishing point as only one of the latter achieved a title: Nigel Povah IM.

The "anti-Streatham" Bd3/Qh5 is commemorated as the "Mushroom Variation" in the 1978 Wade et al book, and here is another Pelikan master-class based on those games. Notes from Knightmare! are given as KM, Roger's recent comments to me are marked RE, and those from the Wade et al, W. Bear in mind that you can get into the main line a move later after Bf4-g5 and Pe6-e5 insertions and so, following the Pelling - Emerson game, the others have been presented here with the extra move.

All is explained in Roger Emoson's Country Notebooks, based on original field work. Here is the 1977 entry from the first Knightmare! - in this expedition he bags a Povah.


...and here is the later instalment from Knightmare! 2 where the hunter is hunted and Roger himself is on the receiving end from one of the two King bros (the one who went on to become a GM).

This by no means exhausts Knightmare!'s exploration of the Pelikan/Sveshnikov, nor of the zoological theme we have been dallying with in this post: for example there is Nigel Povah's seminal examination of the Monkey's Bum in 1977. But we'll sit on that.

The next post in the series will be in one week's time. Thanks to the usual suspects for material in this one -  Roger Emerson and Andrew Martin in particular.

And we wish Roger and Nigel good luck in their campaigns, starting today, in the Seniors at the British. Will they play the Pelikan?

Here is one explanation of the "Oozlum Bird."

History Index
Streatham and Brixton Chess Club - go to its History Section for an upload of the complete Knightmare!

1 f3 and 1... f6 were reprised by (Knightmare reader?) Bobby Fischer in Internet games against Nigel Short in 2001. Allegedly.

I played the Sveshnikov for a while. The computers used to like 12.Qf3, as I recall.

(Note: should you get asked a silly question when clicking on that link, just give a silly answer and you can proceed to the full column.)

Andrew's analyses may or may not be excellent. His game selections however...


Yes, what about the game selections?

Today, at the FIDE World Cup, Shirov was undone by what I think might a relative of the Oozlum - in the hands of 14-year-old Chinese prodigy Wei Yi. See here.