At the end of Wednesday's post there was a mention of Hardinge Simpole, the publishing house which Ray was promoting in the column we were examining.

So who are Hardinge Simpole? As they tell us themselves, they're an imprint of a publishing company called Zeticula Ltd, a registered company with offices in Knightsbridge and an address in Ayrshire.

If we look up Zeticula on one of those helpful company check sites, we find, not altogether to our surprise, that among its founders was a Mr Raymond Dennis Keene. (For some reason the site omits the "OBE" which is usually appended.) 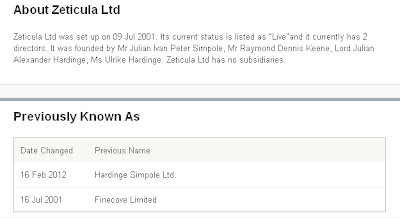 It unsurprises us further to learn that Ray was a director of this company for a period of ten and a half years.

According to the site Ray ceased to be a director early in 2012. This means he was still a director when the Spectator published his column in its issue for 8 October 2011. 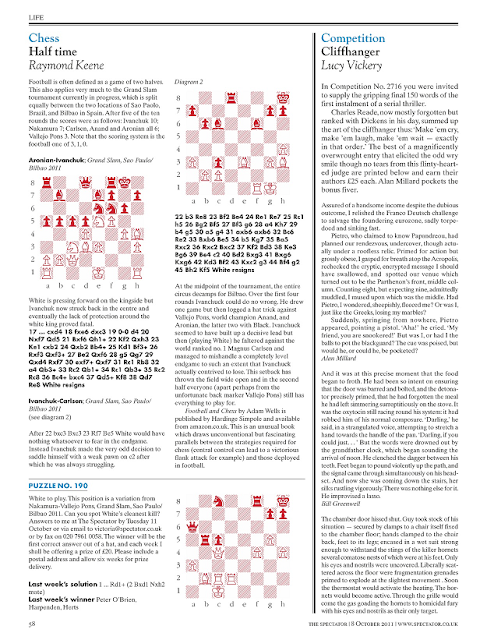 This column was employed to promote a book called Football And Chess.

This book was published by Hardinge Simpole, a company of which Ray was at that time a director. Not that he took the trouble to inform us of his interest in a product he was persuading us to buy. 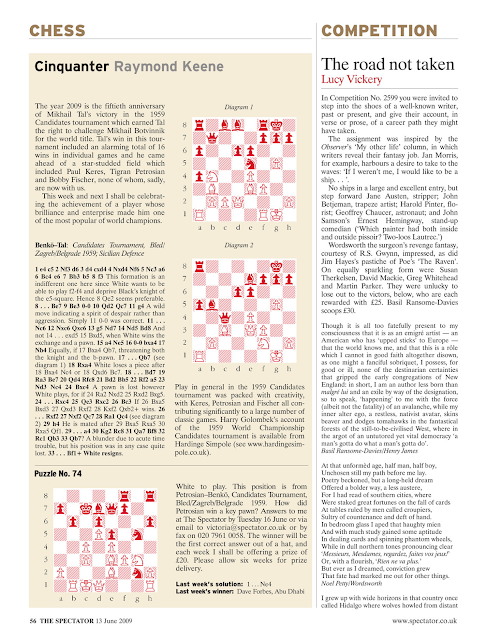 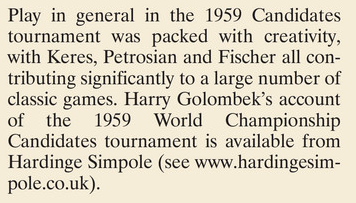 does not trouble you with the further information that should you choose to purchase the item, Mr Raymond Dennis Keene might be a material beneficiary. 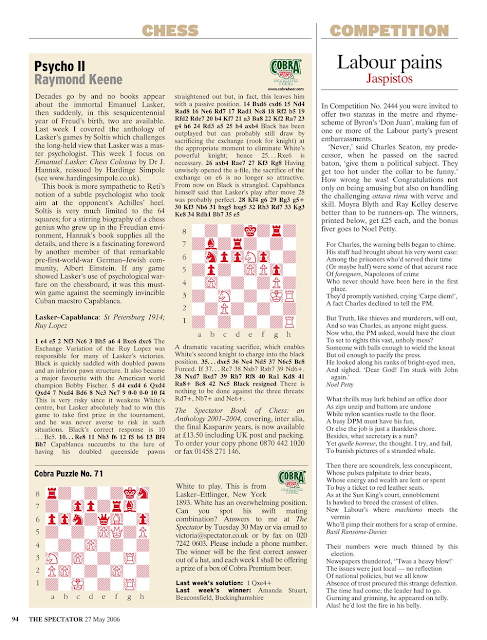 which is almost entirely devoted to trying to sell you a book that is published by his company. 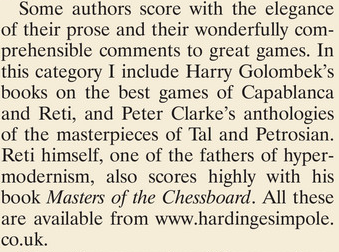 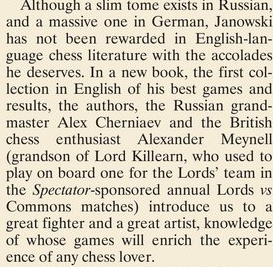 How many of these are there, you ask? So far we've discovered thirty, dating back to 11 May 2002 in which Ray informs us of the existence of a new venture


Petrosian's games are best explained in a book by the British master Peter Clarke which has been re-issued by a new venture, Hardinge Simpole Press. Petrosian's Best Games of Chess (21.95 [pounds sterling]) is available from www.hardingesimpole.co.uk.

but neglects to mention his own involvement in that venture.

Did I say thirty? Thirty in the Spectator alone. There's also a few in the Times. They're harder to find, since Times went behind a paywall on 4 December 2010 and even for the subscriber there's not much chess prior to that date to be found on its website.

But from columns published after that date, here for instance is Football And Chess again, in the column for 25 June 2011.

Then there's the column for 5 March 2011, which also includes a plug for Ray's friend CJ de Mooi 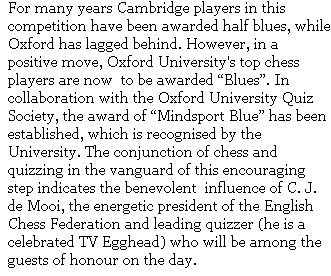 before introducing us to "Richard Eales, the noted chess historian"

whose book turns out to be available from Hardinge Simpole, connection to Ray Keene undeclared.

There's a couple of other things about that column. One is that if you look through the game notes 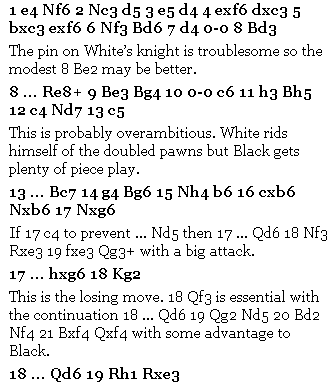 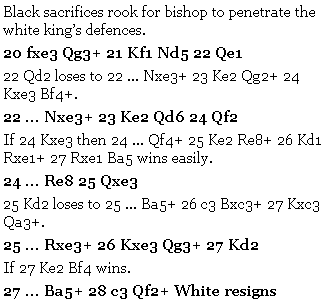 and then look at the Spectator chess column for 8 May 2004, you may recognise some of them. (UPDATE 7 September 2013: or indeed if you look at the Times for 4 March 2000.) But you may also recognise the reference to a particular author, a particular book and the particular publishing house that has issued it.


Notes are based on those by the winner, taken from the book Cambridge Chess by Richard Eales, available from Hardinge Simpole (www.hardingesimpole.co.uk)

Scroll up a bit and and you'll see this:


This year he narrowly failed to orchestrate a repeat performance but did come an honourable second behind the Chinese master Suan Evans-Quek, who has acquired Welsh credibility by marrying the strong Welsh player Debbie Evans.

How curious to say so and yet to leave unmentioned the fact that Richard Eales, whose book he is promoting, is married to Jackie Eales, whose maiden name was Keene and whose brother, Raymond Dennis Keene, is brother-in-law to the author of Cambridge Chess. 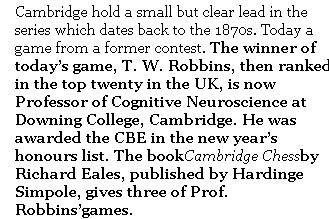 nor in his piece "Renaissance chess master and the Da Vinci decode mystery" published in the Times on 10 March 2008.

We've mentioned this piece before, but as it's pertinent to our Hardinge Simpole theme today, here are some Eales-related excerpts.

Are you connected with Richard Eales at all, Ray? The possibility is enticing and by no means impossible.

Alas, the piece comes to an end and Ray does not tell us. Nor does he tell us that he is a director of the company that owns Hardinge Simpole.

But he should. And could. It would be Simpole enough.

The Alekhine Defence game with the exchange sacrifice was between Martyn Corden and Howard Williams.

I though it well known that the Times Chess Correspondent was a founder and director of Hardinge Simpole.

I suppose you might expect a footnote to the effect that the columnist is a director of the Company mentioned. You see it from time to time in pieces by other journalists.

Well known by some in chess world for sure. Many even.

But, seriously Roger, how many readers of The Times and The Spectator know, do you think?

RDK's shameless and laughable behaviour in this regard is well known. But, and I know I've said this before, the bigger issue to my mind is his total unwillingness to perform the task he's well paid to do, i.e. write a decent chess column. When you compare his offerings to Speelman's, Barden's or Pein's they are simply pathetic. It amazes me that no-one at the Times notices and fires him, quite apart from the plagiarism and unethical self-promotion, but presumably they just don't care as long as the chess column gets filled. We should care though - it's an opportunity being missed to promote chess to the non-playing public.

On a bit of tangent, interesting that his middle name is stated as "Dennis" - and not "Denis" as given in several sources.....

Or does he change that as he feels like it, as well?

I can't recall ever seeeing "Denis".

It is definitely written as such in the old Sunnucks and Golombek encyclopaedias, I think.