Here's my favourite Times column of the first week of the British. It's from 31 July 2013. 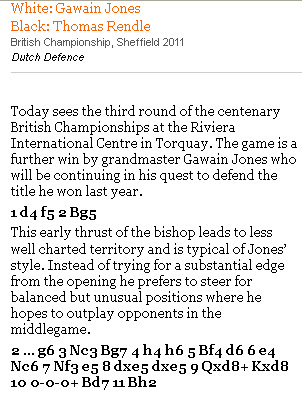 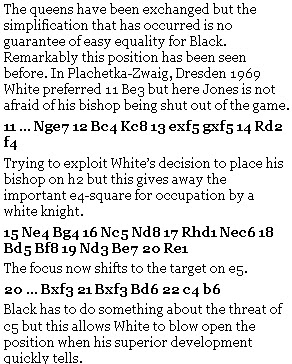 If the Times are ever looking for a change of format in Ray's columns - perhaps to make them more testing - they could possibly try running them as one of those spot-the-differences puzzles you see in other publications. 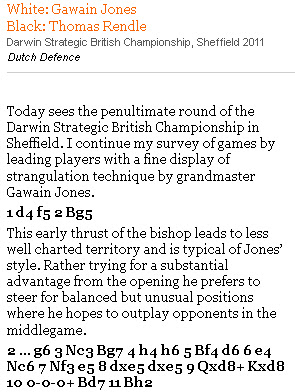 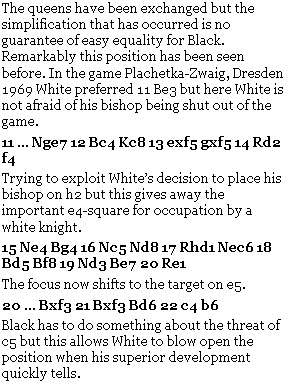 Above is the column for 4 August 2011. How many differences can you spot?

Now, where were we? We'd got up to Tuesday 23 July and of course we covered the column for Friday 26 July at the beginning of last week. (But click on the link even if you've read it before, as we now have the original Penrose-Keene annotations, from the BCM of October 1971, on display.)

We'll round up last week's columns shortly but one other exceedingly unoriginal column from the previous week was the one for Wednesday 24 July, featuring the same Jonathan Penrose whose 1971 loss to Ray is among his most-copied columns. 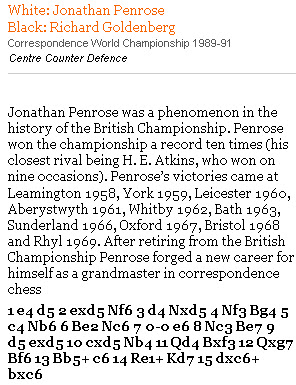 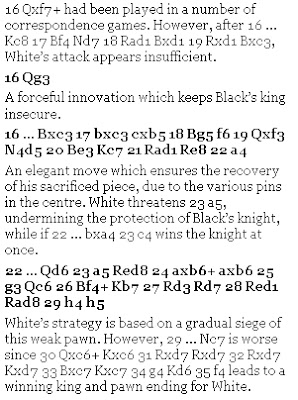 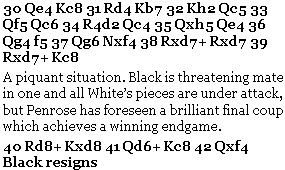 Seeing an old game in the Times is often a clue that there's an old column being recycled. You wouldn't, for instance, believe how many old Spectator columns have found their way into the Times these past three years. However, this one isn't from the Spectator, but the Times itself - for 19 October 1996, as Ray neglects to mention. Here, courtesy of a library search system, are some highlights:


This position was still theory and the obvious 16 Qxf7+ had been played in a number of correspondence games. However, after 16 ... Kc8 17 Bf4 Nd7 18 Rad1 Bxd1 19 Rxd1 Bxc3, White's attack appears insufficient to compensate for the missing material.

An elegant move which ensures the recovery of his sacrificed piece, due to the various pins in the centre. White threatens 23 a5, undermining the protection of Black's knight, while if 22...bxa4 23 c4 wins the knight immediately.

A piquant situation. Black is threatening mate in one and all White's pieces are under attack, but Penrose has foreseen a brilliant final coup which achieves a winning endgame.

Meacnwhile, much of the column (Howell-Pert, British Championship 2011) for Friday 2 August 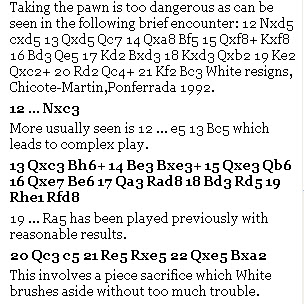 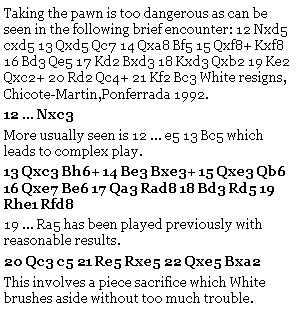 although to be fair, he has, for this year, written a whole extra note. 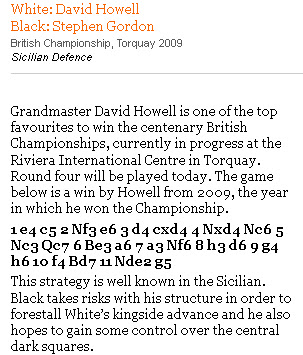 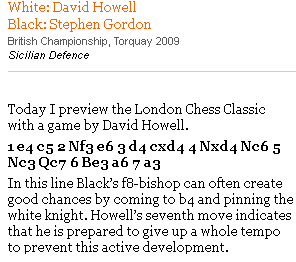 but not alas its second

and after that it's replication almost word-for-word all the way home. 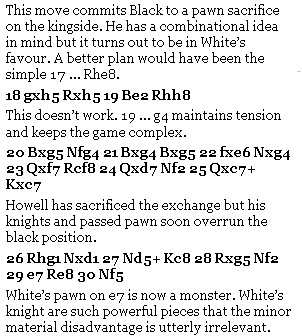 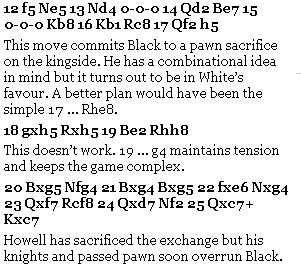 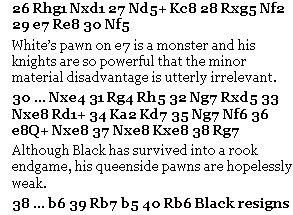 Meanwhile early sightings of sacrificed exchanges and overrunning knights and pawns can be found in the Spectator for 15 August 2009 as well as the issue for 22 August 2009 where they are joined by monster pawns on e7 and survival into rook endgames where queenside pawns are hopelessly weak.

The 30 July column was Jones-Short, which has enjoyed an annual outing in the Times since the original game in 2011. Here's the column for 18 April of that year: 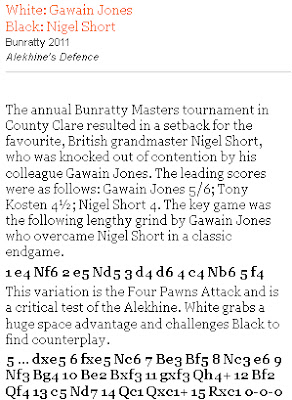 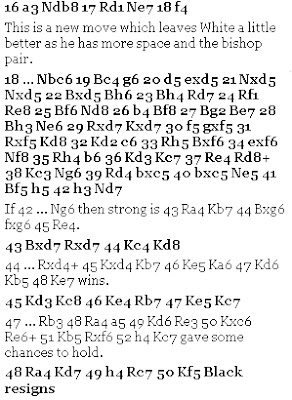 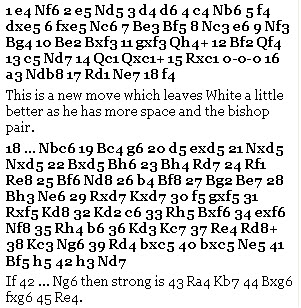 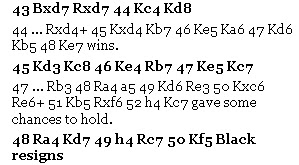 You will notice that the first note of the 2011 column has disppeared, but other than that, the two sets of notes are identical.

Yet the Lord giveth as well as taketh away, for the 2013 effort came with two fresh notes! 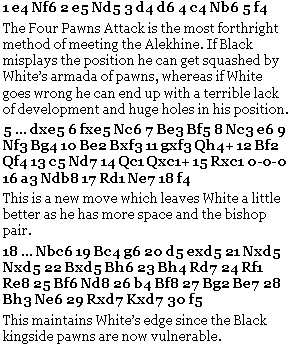 although the ending may be familiar by now. 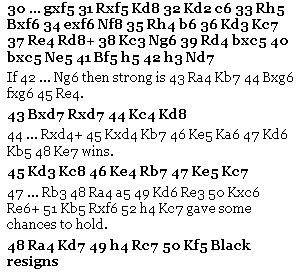 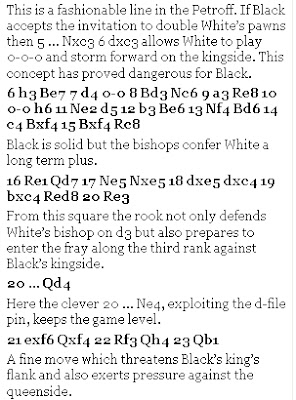 that image being identical in size to the one which will carry all the notes from the column for 15 August 2012. Yet the notes are not identical! 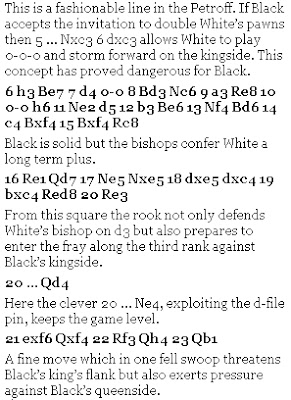 Nor, however, are they very different.

There is an old saying to the effect that there is no such thing as a stranger, just a friend who you have not yet met. One could say similarly that there is no such thing as an original Ray Keene column, just one for which you have not yet found an earlier version. This wouldn't be entirely fair, since he does carry contemporary games, most of which seem to be annotated originally if not always extensively. But it's a fair rule of thumb that if the game is not a new one, neither, probably, is the column.

That said, I confess that to date I've not been able to track down any earlier version of Ray's columns for 25, 27 and 28 July. Anybody else fancy a go?

25 July is Hodgson-Granda, Amsterdam 1996, with characteristic Ray phrases like "Black hopes to repel boarders" and "Hodgson deserves great credit for his courage".

28 July (the Sunday Times) was Arkell-Jones, British Championship 2008 ("this tactical sequence works out badly for Black" and "although Black has a passed a-pawn supported by his rook White dominates the rest of the board").

27 July is Emms-Flear, Southend 2009 which is not on Chessgames but was in the Spectator for 9 May 2009, although the notes ("Black is hamstrung by the diagonal pin" and "White wisely refrains from cashing in too early") are not the same.

If anybody knows of earlier versions, please use the comments box or send details to chesscomments@gmail.com (or @ejhchess on Twitter). Or can it be that these columns are actually original?

Why do you suppose Ray does this? I mean, it would take him no time to annotate a game properly if he wanted to. If you or I had a column of this kind, we'd want to. Is Ray just not very interested in chess any more?

Well, who knows. We'll never know unless he explains himself, and even if he were to be sacked I don't believe he would ever admit anything.

However, although part of the explanation might be that Ray is really very lazy, I don't really think it does take "no time" to annotate a column properly. I think it's a full-time job, and doing a full-time job is not compatible either with the aforesaid laziness or with Ray's very busy networking and lunching life.

Also, once you start finding you can do this and get away with it, why not carry on? He's been getting away with this particular activity since at least the Nineties.

Monday to Wednesday this week has featured games from the early rounds of the current British Championship, so that at least adds some fresh material to the collected works.