It's the sort of thing that's hard to believe in retrospect, but Viswanathan Anand, the world chess champion, played in the British Chess Championships twenty-five years ago, presumably the only world champion to do so.

He didn't win: Jonathan Mestel took first place while Anand got battered by Jim Plaskett on the White side of a Taimanov. Still, there were other titles to be won in the future.

I mention Anand's participation as a rather strained way of linking the Championship - this afternoon sees round nine in the 2013 competition - to today's plagiarism piece, which involves Ray's Times column of 6 October 2011 and the annotations it supplies to the game Anand-Karpov, Las Palmas 1996. 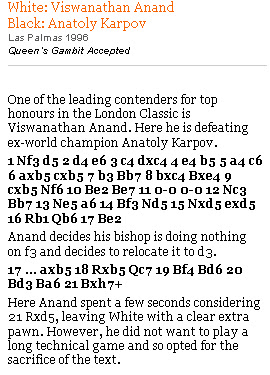 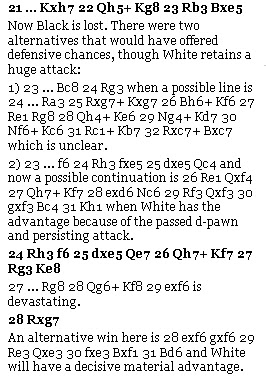 Naturally these are not from Kasparov's My Great Predecessors series, since Anand won the title after Kasparov, not before him. They're not, in fact, from Garry Kasparov at all.

They're from Viswanathan Anand himself. They're from his book My Best Games of Chess, published by Gambit in 1998. 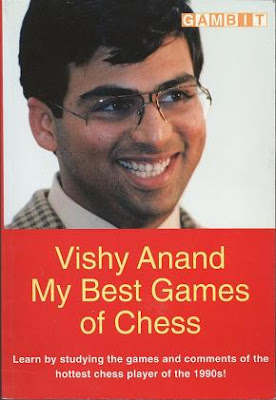 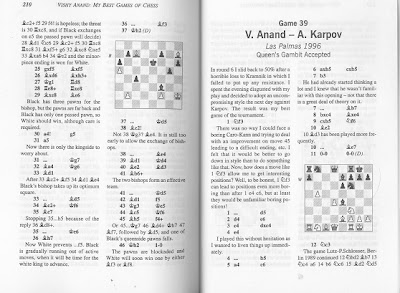 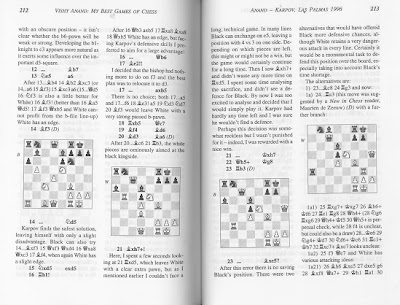 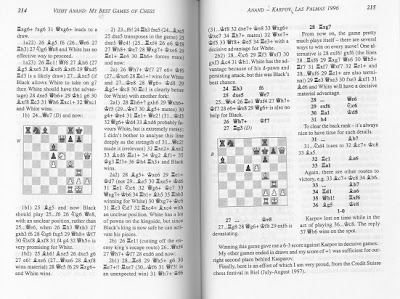 Let us engage, once again, in a comparison.

It always provokes suspicion when Ray tells us what somebody else was thinking. Here, rightly so. 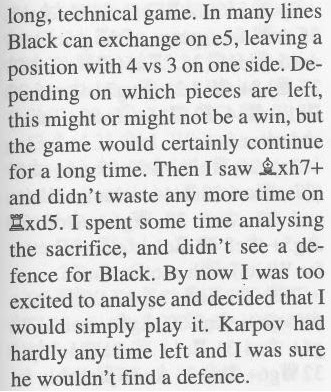 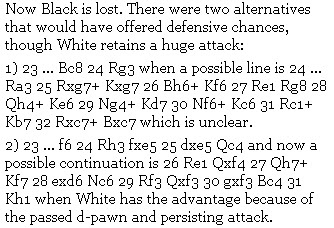 This is quite a variation-heavy piece by Ray's standards, and - as you can see above - these two variatons have been taken from more than three columns' worth of analysis. I've cut these down a bit! 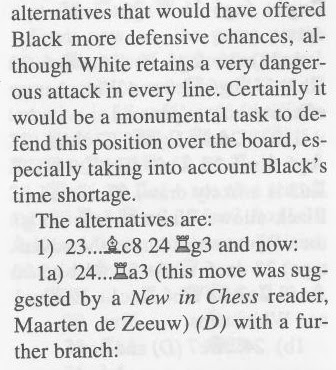 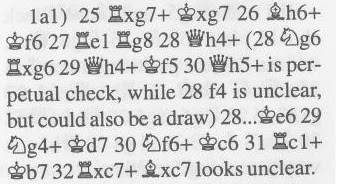 That's our "defensive chances", our "retains...attack" and our "unclear", though not our "Maarten de Zeeuw", our "New In Chess" or our "Viswanathan Anand". 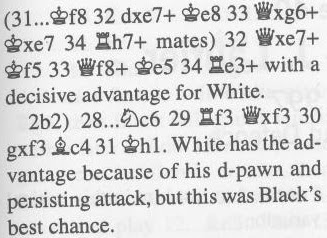 And there's our "White has the advantage because of his passed d-pawn and persisting attack".

I think we can manage the rest without further comment. 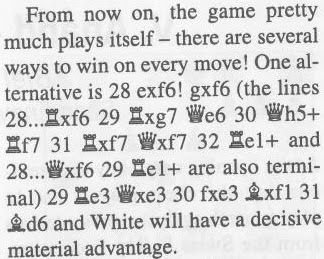 To remind himself of this, he might have consulted the Times for 28 February 1998*, from which the notes for the 2011 are taken, with a number of omissions and a few small alterations (though curiously, "because of the passed d-pawn and persisting attack" does not seem to be in the 1998 column). It begins:

A SURPRISING lacuna in chess literature has recently been filled with the publication of Vishy Anand My Best Games of Chess (Gambit Publications, Pounds 15.99). The Indian grandmaster Viswanathan Anand has challenged both for Kasparov's PCA world title and for Karpov's Fide title. Here is a key game from the book showing Anand's practical strengths and tactical alertness, in a victory against the defending Fide champion, who narrowly defeated Anand in their match earlier this year.

Thirteen years later, though, the lacuna is the missing space where Viswanathan Anand's book ought to be mentioned. But there is nothing surprising about that at all.

When I began this series seven weeks ago I asked:

now Ray's even plagiarised Garry Kasparov, who is there left to plagiarise next?

[Thanks to Angus French]

Vera Menchik is worth a mention; she was the reigning women's world champion when she played in the British at Brighton 1938. Also the 1st woman to play in the BCF championship proper, I believe.

Didn't Alekhine win the Major Open? I may be talking nonsense.

Amazingly it appears so though of course that's not the Championship per se.