No last round drama in Torquay. Congratulations to David Howell, who won this year's British Championship last night, clinching the title with a round to spare. The tournament therefore effectively lasted only ten rounds - as opposed to the nine it was previously advertised to last.

As regular readers already know, I should be playing in the next year's Championship, having qualified by courtesy of a performance in Penarth that did involve last round dramatics, beating an International Master in that round (the ninth) to reach a score which - I later learned - earned me a qualifying place.

I'll get on to that game in a moment, but by way of an entrante we'll first take a glance at my seventh-round game, in which I had the black pieces against FIDE Master Carl Strugnell, rated 2302 at the time the game was played.

I was only playing Strugnell because of the outrageous stroke of luck I'd had when completely lost in the previous round. I played a bit better in round seven, but a bit of luck went with it this time too.

I had a feeling he'd play this. Now the books all say something to the effect of "4...d6 is OK but 4...Bc5 is obviously better so that's the only move we'll analyse". Fair enough. 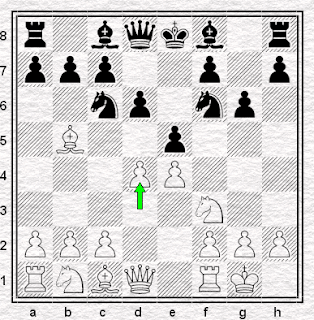 I wonder whether White might have been better off trying to take advantage by taking on e5 or c6 or both.

And here, perhaps better to play 8. Bd3 rather than ease my space disadvantage, especially as I've chosen to play the knight to b8. Having been rather worried after 6. d4, I was sure I was OK now. 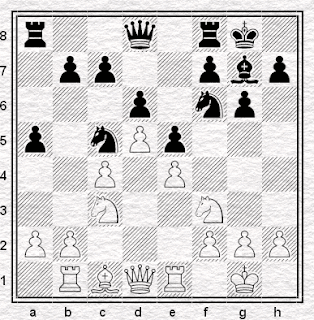 You'd have to be a rather stronger player than I am to see many problems for black here.

My shonky old computer program prefers 16...Nf4 first. It may be right but as my PC keeps mysteriously closing down when it's on, I'm not sure I'm terribly interested in its opinion. 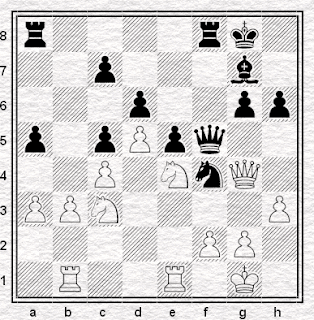 When the knight arrived here I thought I might be a little worse and must have mishandled the previous few moves. Still, judging by the next few, it's not obvious that White's better placed to make progress than Black. 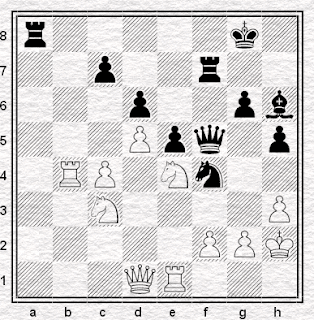 When White played this I had literally no idea why and it was only when looking at the game again for the blog that it occurred to me he might have been worried about ...Nxh3+. He was losing the thread though - having had an hour left for fifteen moves, he proceeded to use fifty-one minutes on his next five. Without finding any good ones.

Opening the queenside has done at least as much for Black as White. 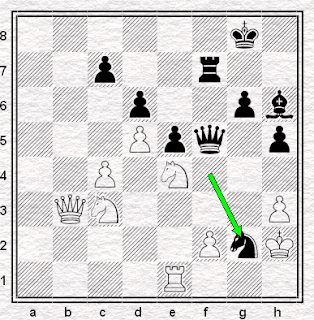 This may not win and it may be obvious to a good player. But I'm pleased I had the strength of mind to play it, especially as I couldn't see more than dimly how it might turn out. And in practical terms, it probably did win the game, as White appeared to panic. Indeed, I should have won next move.

Yes, too many diagrams, but have a look at this one anyway. 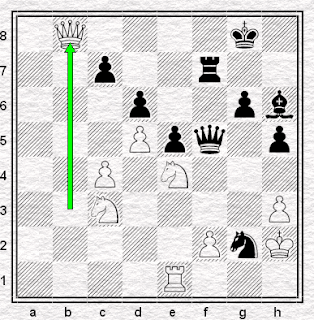 I've shown this to a few people and more than one has made the same mistake as both Strugnell and I did.

29...Rf8 and White resigns. Why didn't we see it? I guess because we thought of the knight on g2 as having been sacrificed. We didn't think of it as attacking the rook on e1.

Though it's strange, at some stage during White's next long think, I spent ages considering what would happen if he didn't take the knight, and calculating the best square for the knight to go to if White moved the rook instead.

No pasa nada. The win is still there. 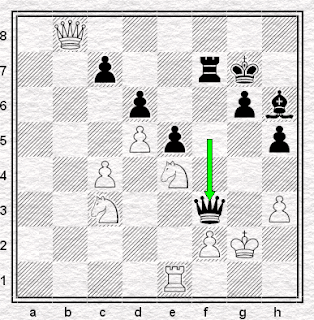 The win is still there, Shonky tells me, if I play 30...Bd2. It's less happy with this version, which it reckons might be a draw. I suppose it might have been, had White played his king to g1 rather than, inexplicably, to f1.

Saw it this time!

White played his move and then resigned.

Not a great game, but not a bad one and you don't always have to play great even to beat a good player. You just need to keep it tight and hope your mistakes aren't big ones.

Another thing I found out when writing up the game was that Carl Strugnell is a follower of the chessboxing cult. 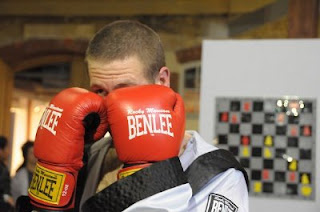 This is probably Carl Strugnell

Given my longstanding view of that particular racket you'd think this would add an extra gloss to my victory. But it doesn't really. Doesn't make any difference. And it's not as if he threatened to beat me up or anything. 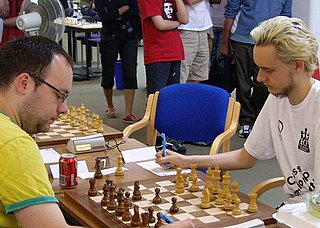 In the 2007 Championship Jack beat Gormally with White

So to the final round, which was played in the afternoon, rather than the habitual morning start of FIDE opens. This gave me time to find out who I was playing and do a little preparation.

Yes, normally I prefer 1...e5 but I knew Jack likes the Centre Game and I was less interested in its theoretical reputation than the practical likelihood of losing in eighteen moves against somebody who had played that opening x more times than I have, where x is the number of times he has played it. (Well, maybe x-1. I met it once and played 2...Nc6.)

So, off to my room with a book Jonathan had helpfully brought along. It seems that Jack plays the Tarrasch against the French... 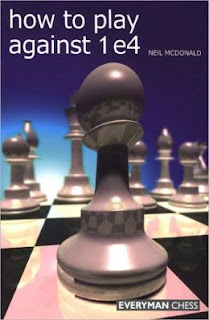 I actually don't understand why people play this. Black seems to have all the fun. 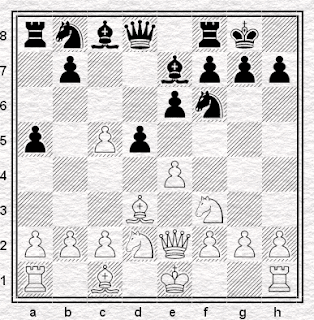 McDonald gives three lines here. One begins 8. O-O (and would transpose back into the game if White were to play 10. c3 and Jack had played 10. O-O). One begins 8. c3 and involves White trying to hang on to the pawn. One involves 8. e5 and 9. h4. Jack aims to play both the last two.

I had a good think before this move as I couldn't work out what difference it makes to the h4 lines if c3 and ...Na6 are in. I still can't.

As it turns out, it's more like we're in the c3 and ...Na6 line but with h4 and ...h6 in. Again, I couldn't (and can't) see if it made any difference, but I used up a lot of time, when I should basically have been following my preparation, working out what Black would do if White took on f6, e6 and d5.

Jack didn't do that. 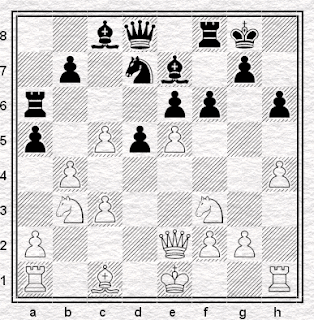 This might even be the losing move, though White's position doesn't look inspiring to me in any event.

This has to be great for Black. 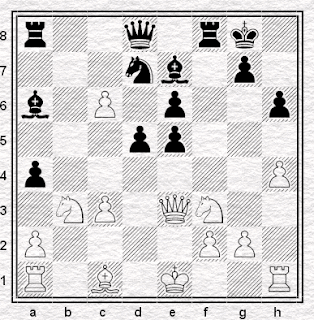 I seem to recall people-with-programs telling me afterwards that 17...Rf4 is massive. Shonky's not so overwhelmed (albeit it's still favourable) but then again it takes Shonky about five minutes to get to 15-ply.

The game move is fine. 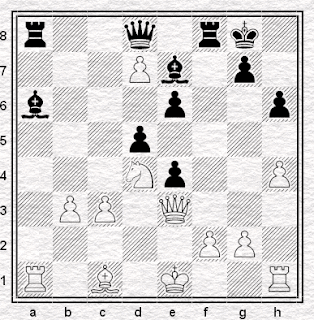 20. Ne5 doesn't change much after 20...Qc7. You could quibble with almost any of White's last half-dozen or so moves, but basically White's marmalised his own centre and Black's walking all over him. 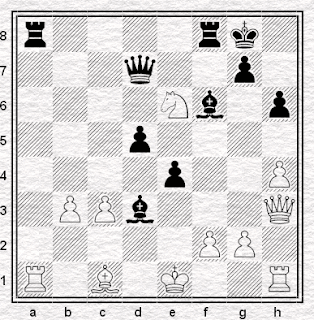 However, it was only at this point that I looked up - as it were - from trying not to give the game away too easily and realised that I was surely on the point of winning it. Where's the king going? Where's anything going? 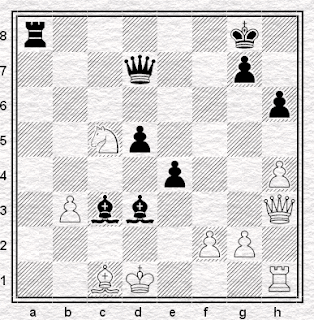 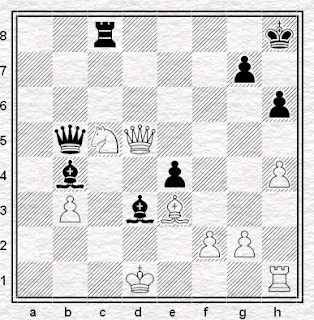 So, two days and three rounds after fluking a win from a position I'd considered resigning, I had 6/9, some prize money in my pocket, British Championship qualification and my first ever win over an International Master after a number of disappointments.

Funny how things turn out.

Thanks by the way to the people who made suggestions for The Worst Move On The Board. I'd hoped to do a Championship Special but in the end I was lacking both in time and in really good examples (save those which Chess Today had already published!).

Like the bishops in that second to last diagram. And photographs of Jack from his 'Spike from Buffy' days.

I think in the first one, the idea behind Bxd7+ is the King's Indian pawn-storm doesn't work without black's light-squared bishop, therefore white get a good game. Also white has gotten rid of a bishop that often gets locked behind the closed pawn structure. It looks to me like 14.h3 and taking on c5 were clear signs something had not gone according to plan.

My tournament seriously skidded to a halt in the last four rounds at Penarth. I could blame any number of things for my last-round loss (my epilepsy, my room's not being air-conditioned, a number of external stresses to do with work and relationships) but the simple fact is that Justin just played better than me.