A cheat at chess 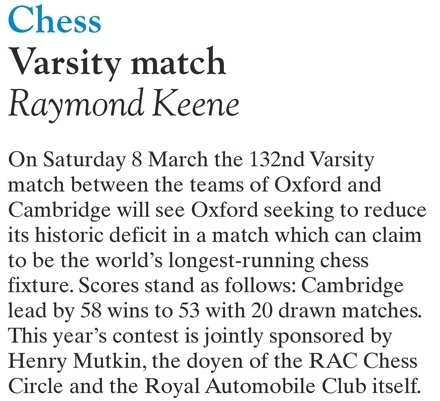 Is Ray going this year? He doesn't actually say so, but unless I mistake myself, he's usually among the attendees.

Now I appreciate that the Varsity Match (first played 1873) is an even older British chess tradition than turning a blind eye to Ray Keene's record of corruption and misconduct (first played 1978, as far as I'm aware) but are we really going to continue to combine the two?

Given that this is a chess match between Britain's two most prominent academic institutions, is it really appropriate to associate the event with Britain's single most prolific journalistic plagiarist? Any single act of plagiarism could and should threaten an academic career with immediate termination. Ray Keene has well in excess of a hundred of these acts to his name. So if Ray is turning up this year, why would he be welcome?

Are you saying it should cease in any event, even if Ray no longer had anything to do with it? That needs some explanation surely - it seems to be an event that has some value (if only by virtue of history) and its indulgence is privately sponsored?

You appear to be suffering from monomania. Raymondo's antics really aren't that important in the grand scheme of things.

Are you saying it should cease in any event, even if Ray no longer had anything to do with it?

Raymondo's antics really aren't that important in the grand scheme of things.

Actually, I think thirty-six years' worth of getting away with it is quite important in the grand scheme of things.

Of course this is an important issue. It is amazing to me that this kind of blatant plagiarism can be tolerated. Chess is a game (sport) that millions of people enjoy and yet FIDE is poorly run. Higher ethical standards are necessary. Insisting on them is not monomania.

It is true that no further evidence is required in order to make the point in this particular case, and that maybe some new strategy is needed in order to effect change, other than just further cataloguing of malfeasance.