Every Picture Tells A Story:...And A Great Leap Forward

Number 25 - a joint effort by Martin Smith and Richard Tillett - in a story which may (or may not) have reached its conclusion.

Last week we explained that we had received an unexpected, but very welcome, invitation to go and see Thomas Leeming’s painting of the Gents of Hereford that we knew had been sold at Sotheby’s in 1991. It was the one that we had been searching for over four long years.

The phone call came after we went back a step and asked Sotheby’s to help once more in contacting the 1991 purchaser, and just as we were about to abandon all hope of success: result! The owner kindly responded to our open letter. Now we were off again in hot pursuit, but not this time westward and Hereford Ho! but now north to the . One step back…and now a great leap forward. After a quiet period in our Leeming sleuthing it felt just like the old days.

We pass en route, well known to all for its crucial role in breaking the German codes in WW2, and well known to chess players for the part played by Hugh Alexander, Stuart Milner-Barry, Harry Golombek…

…and we arrive at our destination much further on, to be warmly welcomed in by the owner and his wife, and invited to look, at last, at the now no longer missing Leeming. 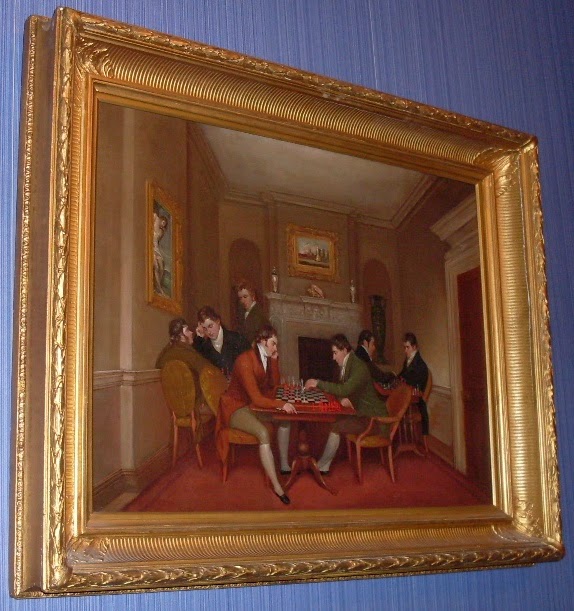 It hangs prominently above the fireplace in the sitting room of the owner’s lovely Georgian-style house, which was built just a couple of decades after Thomas was plying his trade.

It feels strange coming face to face with it at last: we knew more about this painting, the artist, the sitters, its story, than anyone else – and yet we had not until now laid eyes on it. And here it was, a little smaller than we had expected, but every bit as captivating. It was a magic moment. And a bit of an anticlimax. It was journey’s end. Done sleuthin’.

But old habits die hard. We examined the front in natural light and with a torch, and we pored over the back with a dealer’s label with a stock number (could be useful if and when we get round to tracing the picture’s provenance – one of the few loose ends in our story still to be tied) and the list of sitters. But, no, there was not any trace of a ticket from the 1818 RA Summer Exhibition.

We photographed it from all angles: the front, the back, on the floor, and hanging, and of course we posed for photo standing next to it...

….and finally we paused for breath.

Over a cup of tea and cakes we told the owner and his wife the story of our Leeming adventures, and shared what we knew about the painting; and we would say that they were fascinated, now seeing the picture in a new light.

And of course we wanted to know why he had bought the picture, and especially the story of his time at , where he had known Hugh Alexander very well and had been in the thick of the code-breaking effort. He is not an avid chess player (devilishly difficult cryptic crosswords being more to his fancy) but has played a game or two over the years and even started a chess club at his school.

The owner is, of course, now elderly, and he is understandably concerned to protect his and his wife’s privacy and security. Having so generously taken us into their confidence we readily agreed not to broadcast their identity or location. We are most grateful to them, and we wish them many good years to come.

It was a wonderful climax to our search over the years. For us, knowing that Thomas Leeming’s painting had an appreciative owner, with his own rich history and chess connection, is a fitting culmination to our saga and to our blog series.

But there is a little niggle in the back of our minds: the title on the back of the picture is given (in old typescript) as ‘The Hereford Chess Club’, and not ‘Portraits of the Gentlemen of the Hereford Chess Society’, the title given for the picture Leeming exhibited at the RA in 1818. Pictures do change their titles over the years, and in all probability this is the RA picture, but we do not have any documentary evidence. So is it possible there’s another one lurking somewhere, awaiting discovery…?

Well done! And picking a sweater to match the wallpaper was a particularly pleasing touch.

This story warms the cockles of my heart. I must say that Martin and Richard make a lovely couple.

The painting belongs to Lord and Lady Fotheringham. Their address is Lazenby Manor, Solihull, West Midlands.
Tuesday night is Bridge night for the retired Major and Thursday morning Lady Fotheringham has her hair permed. The painting may be pilfered easily during these periods.
The key to the front door is stored under the second flowerpot on the left and the painting in on the north wall of the conservatory. Good luck!

This is a recent comment which I have copied and pasted-in from Episode 15. It advertises a conference on Ian Greenlees to be held in the Commune in which he lived.
Dear All,
I am glad to inform you that from the 12 to the 14 of September 2014 at the Biblioteca Comunale of Bagni di Lucca will take place the following international conference: UN ESTETA A BAGNI DI LUCCA: IAN GREENLEES E IL SUO MONDO (An Aesthete in Bagni di Lucca Ian Greenlees and his world).
It is organized by the Fondazione Montaigne together with the University of Pisa.
Elisabetta d'Erme

Fantastic and fascinating piece of research (I speak as both a professional, academic, art historian and an amateur genealogist)!
You've not only solved for me a number of queries about Leemings in London in the 18th/19th century, into which I've been delving, but also provided some wonderful and rich social background for the period (with your sources clearly identified - something so often, sadly, lacking). Thank you!
G Clarke