Every Picture Tells A Story: One Step Back...

Number 24 in a saga without end. This one mainly by Martin Smith, with minor tweaking by Richard Tillett.


Followers of our Every Picture Tells A Story story may remember the update back in November last year. There was, in truth, not much to report Thomas Leeming-wise (he, the painter of the Chess Gents of Hereford, in its several versions back in the early 1800s), but with Richard's help we had some fun at expense of the outlandish "Reverend" William Hollings whose passing had been documented back in 1820 in an evocative obituary in the Hereford Journal. Thomas had in fact painted the not-so-Reverend gentleman in the little watercolour below, setting him against the background of his happy hunting ground, the cathedral city of Hereford.
Such was the flimsy pretext for episode 23 and we were quietly smug at having squeezed another blog out of Leeming et al., But that, we thought, was that: we couldn't imagine that there might be yet more to say.

But there is. And much sooner than we - and perhaps you - might have expected. We are now able to bring EPTAS to the dramatic and splendid crescendo played out below. We won't, however, call this the finale as you never know what else may turn up, a lesson we have learned well in our four year quest in pursuit of the Gents.


In November, around the same time as our previous episode, we were joined once again in the comments box of episode 15: Ian Greenlees - What A Tease by David Platzer who had been kind enough to make some observations on our earlier ramblings (and a number of other commentators have since arrived as well). Thus we are taken back to Mr. Greenless who, in the 1980s, had owned the version of the Gents that Leeming exhibited, we think, at the Royal Academy in 1818.

The painting had been photographed when in the Greenlees Collection and used as a book illustration. It was this reproduction that had originally caught our attention and excited our interest in the Gents. After Greenlees's death in 1988 the painting had been auctioned at Sotheby's and had thence disappeared – and we have been searching for it ever since. Here is the photo of it (in black and white) in the 1991 Sotheby's sale catalogue. 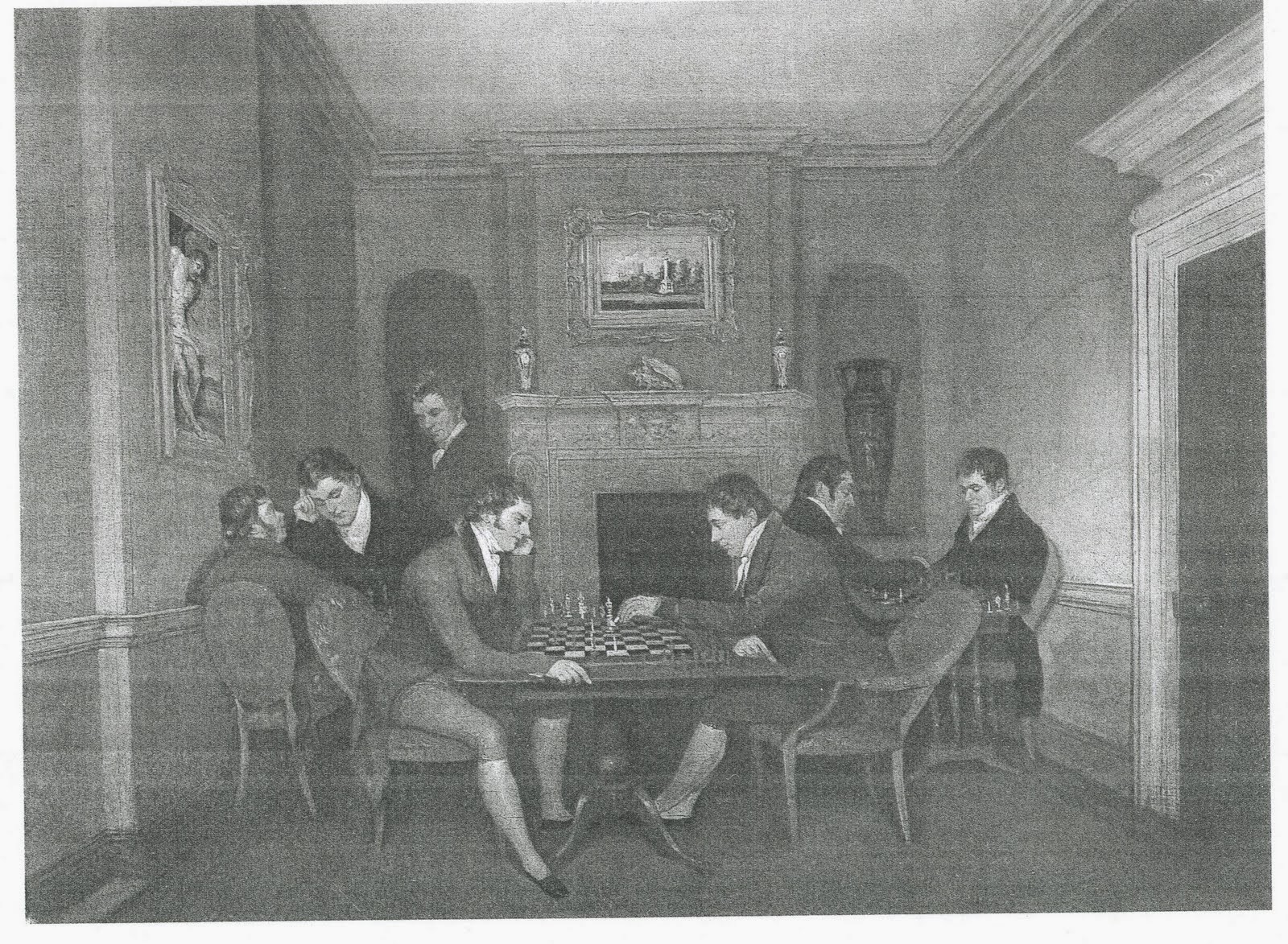 David Platzer had been a close friend of Mr Greenlees, and very generously sent us a copy of his reminiscences of him published in the London Magazine in 1994/5. He also pointed us to references in other memoirs, including the attractive photograph (below) of a younger Greenlees in the 1930s which appears in a 1954 biography of Norman Douglas by Nancy Cunard. She, like Greenlees, benefitted from inherited wealth, though her unpredictable emotionality contrasted starkly with his grounded affability. Their politics took different tracks as well - she headed left, he stayed in the middle of the road.

David’s first hand knowledge of Ian Greenlees helpfully put much of the speculation in episode 15 into perspective, for example concerning his positive role in the British Council in Italy at the beginning of WW2 when Greenlees had been “reminding the Italians of the traditional friendship between England and Italy [in the hope that it] might help dissuade Italy from entering the…War on Germany’s side.”

“The War” as David continues later in his piece “which pitted the two countries [Greenlees] loved most against each other might have been disagreeable to him, and yet he served with distinction.  [After the War] he did what he thought best to repair the damage to Anglo-Italian relations, a task to which he was well-suited, given the rôle he played in the Liberation of Italy and his friendships with the most notable Italians of the postwar period.”

Ian Greenlees was remembered by many, David suggests, as a genial bonviveur, and a “gifted amateur” in the cultural field, at ease with the illustrious ex-pat English community in Florence, and Capri. Francis Toye who, for the twenty years after WW2, preceded Greenlees as Director of British Institute in Florence said “[He] was in many ways a remarkable person, combining a passion for modern pictures with a delight in food and drink (not to mention a capacity for absorbing both!) that have rarely been equalled”.

That mention of Ian Greenlees’s interest in art pointed us in the direction we wanted to go. David Platzer commented on “Ian’s excellent eye and independent tastes [that] also led him to collect specimens of the English Schools from Joseph Wright of Derby to Richard Wilson to Burne-Jones and such modern Italians as Severini, Guttuso and Morandi.”  Not surprising then, we might add, that he snapped up Leeming’s Gents for his collection.

This was the spur to reinvigorate our search for the lost Gents of 1818, and via David we were introduced to a network of acquaintances who remembered Ian Greenlees and even some of the circumstances surrounding the sale of his estate. Thus, another one-off reader of our blog, Mark Roberts at the British Institute in Florence, “well remember[ed] the chess conversation-piece…hanging in the [Greenlees] apartment in via Santo Spirito…”

Gosh! We might be getting warm – someone remembers seeing the painting…

Through this network we were now put in touch with a senior figure at Sotheby’s. Why not, it was suggested to us, see if he could help by contacting the 1991 purchaser. This was actually something we had tried unsuccessfully three years ago, but at that time we knew little of what we did now about Leeming, the Gents, and the three versions of the painting, and so had little to offer of substance to encourage anyone to take us seriously – and anyway (so we rationalised to ourselves) nearly 20 or so years down the track since 1991 anything could have happened to the purchaser, or their address, or even, heaven forfend, to the painting itself.

Now, three fruitful years after our first punt, at least we had plenty to offer by way of solid information, and so - but without great hope or expectation -  we thought we’d give it another shot, and off went an open letter to Sotheby’s for them to forward to the purchaser…and two weeks later I had almost forgotten about it: if I had thought about it at all I would have supposed we were up another blind alley.

Sitting at home tinkering with another post on the computer one Friday morning last November (I remember it as if it were yesterday) the phone rang, a disembodied voice indistinctly introduced itself and asked if I was the chap interested in his chess painting.

After picking myself up off the floor, passing several times over the moon, and sharing the glad tidings with Richard, we found ourselves, a couple of months later, on the M1, having, by way of preparation in the meantime, read what we could about the Bletchley Park code-breakers.

Next week: the enigma is solved.

Acknowledgements etc.
Thanks to all who knew Ian Greenlees and who have commented on Episode 15 - and/or who have corresponded with me since. Your help has been invaluable.

If any reader would like to see David Platzer's article on Ian Greenlees in the London Magazine of 1994/5, please send a request to me at chesscomments@gmail.com with your email address and marked "FAO Martin Smith - not for publication".