While I'm complaining about trivia.... 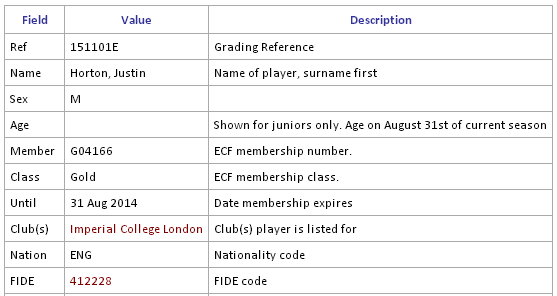 I mean, specifically, this?

I have no idea why I'm listed as playing for Imperial College London, as such. I did play a few games for Imperial in, I think, 2005, when I ws a member of staff there, working in what passed for their library service. I think it may have been as few as three: quite likely the fewest number of games I've played for any club I've ever represented. Odd therefore to be attached to them.

More than that. Nothing against the good people of the chess club, but I hated that job. It was without the slightest doubt the most disgraceful, contemptible, degrading, loathsome place of employment I have ever known for any length of time.

I worked there for four disgusting years during which I achieved nothing and from which I cannot recall a single pleasant memory. Even now, whenever I come across managerial laziness, cheating and incompetence the first thought I have is "Imperial College London".

So seeing the phrase actually attached to my name is about as galling as it gets.

I liked Streatham and Brixton though. Any chance of changing it to that?
Posted by ejh at 7:55 am

Couldn't agree more about Imperial.
Getting a PhD from there probably not quite as bad, but pretty darn awful.

The ECF grading page shows detail results. The history for Justin over the last 36 months shows him as playing in the Middlesex league for an Imperial College team. This contributed to the minimum of 9 games required for an ECF E grade. The submitted data for the 2013 Hampstead event didn't contain club affiliations so didn't override the previous data. Probably *Spain (the * indicating a place) is what it should be.

In the last 36 months? I am very much sure I would remember that if it had happened.

Who did I supposedly play?

According to the ECF grading website, you or someone of a very similar name, played as follows:-

Misidentification of players, either creating duplicates or spurious merges is one of the principle causes of inaccuracy in grading and rating systems. If you are quite sure these aren't your games, there's a contact box on the website at http://www.englishchess.org.uk/grading/database/

If there's been another Horton playing for Imperial, this will have the side effect of removing the 200 plus grade and making yesterday's blog piece redundant.

Well, whoever played those games, it certainly wasn't me.

And they scored more points for Imperial than I ever managed.

I tried to complete the box but it seems to rely on your computer having Outlook Express set up, which I haven't. Actually the whole ECF site looks a bit strange at the moment (pages far too big for the screen and so on).

I'll maybe email when I'm back at home on Sunday.

Richard Haddrell is database administrator. As purges of duplicates is one of his regular activities, I would imagine he would want to be informed if it had gone too far. An email address is on the site he runs at http://www.sccu.ndo.co.uk/, if there isn't one easily found on the ECF pages.

It says your name on the results archives for the Middlesex Chess League:

Adam B's comment probably explains it. Many result websites now work on a point and click basis whereby you click on a list of possible names rather than type it in and potentially misspell it. Horton, J being probably next to Hookham, J in the list of Imperial possibles, it got selected incorrectly by someone unfamiliar with the Imperial team.

The player in question evidently didn't notice that a handful of his games were missing from his ECF grading record.

Tell you what, Justin, Jamie Hookham lost for Imperial last night – I’ll see if we can get that credited to you as well; that should help redress the balance a bit, and I don’t suppose Jamie’ll mind.