Thanks go to Jonathan B for alerting me some weeks ago to this nice bit of Chess in Art then doing the rounds on Twitter. It is also viewable on this excellent Chess in Art site, which tells us who created it - George Goodwin Kilburne (1839-1924)... 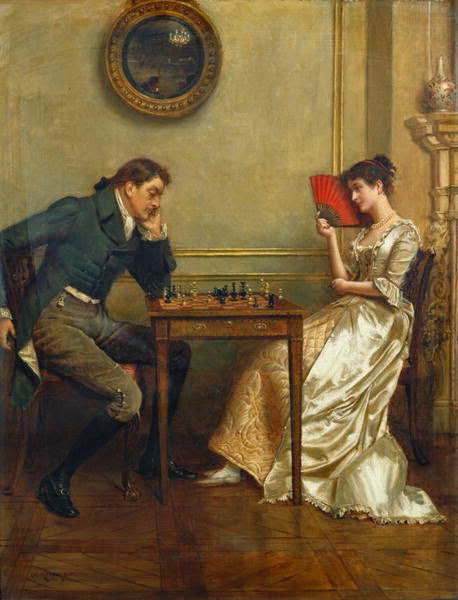 ...though not precisely when, nor its size; and, although it must have been painted in the late 19th or early 20th Centuries, the scene depicted is earlier, probably around the 1820s (thanks go to my Every Picture Tells A Story colleague Richard Tillett for this assessment).

My curiosity, like that of the young lady, now aroused (and perhaps the young gentleman, in some part too, as we may see below), a couple of Chess in Art Postscripts ensue. They explore that small sample of chess-in-art wherein someone isn't looking where they ought. One other self-imposed criterion for this selection is that there must be two figures in the picture, one male and one female, and two figures only. If you were to go with the thematic classification of chess art set out by Yves Marek in his magisterial Art Échecs et Mat (2008) (discussed here, et seq), you might file them under Érotisme. And on that note, a warning for readers of a nervous disposition: this post contains adult material.

Not that any érotisme in the scene above is in your face by today's standards. And that's where we start this analysis. With her face. And the red fan - which is a blatant device for calling our attention to it, and, by the same token, the blush on her cheek. Seemingly bamboozled, her opponent might yet, we may suppose, eventually stumble on a move; and then, if and when he looks up to gauge her reaction, that startling accessory will serve another purpose altogether: to deflect his prying eye and shield her from his impertinent curiosity.

And the rougissement, what might that betray? Sympathetic embarrassment at his plight? Immodest self-satisfaction as she bests him at a man's game? Or even a quickening of the pulse as she beholds him by the board (would that she could behold him somewhere else?).

Whatever sublimated and barely expressed desire the fan (in ardent crimson) suggests, its double function for the purpose of picture-making is clear for all to see: to summon our gaze, and to set-off her delightful profile.

So, now that we are looking at the formal aspects of the picture we can clock some other familiar chess-in-art motifs. He leans forwards and she sways back as if they are pinned together by Cupid's arrow (Oy vey. Enough already.) and artfully three of their forearms line-up in parallel to give the appearance of a counter-balance - as indeed do a pair of lower legs (one each). And just as the players engage upon the table, there is an impending impingement under it - for that is what their two adjacent feet inevitably will do. Footsie by design; nothing in this picture is accidental. So, they rock and roll in visual harmony (against the four-square grid of the table and decor), and this bodes well for the post-mortem when the play is over.

If the fan directs us to the young lady first, the fellow is not to be outdone, although it is not his rugged profile that demands our attention. Two centuries before the careless abandon of today's young bucks on, for example, the public transport, he splays his legs akimbo as if he has a claim on another seat besides. And what might have induced this imposing spread of the lower limbs? I am reminded here of an acutely oblique turn of phrase employed in an Agony Aunt column which just happened, the other day, to fall open in front of me. Verily did an involuntarily, and intimately, afflicted correspondent - male - employ a euphemism that dare not speak its name, but which is à propos to the case in hand. Could the oh-so-close proximity of the divine creature to our distracted chesser (is his mind really on the game?) have excited on him an untoward "visual disturbance".

We can look around the scene for some other, perhaps rather more perplexing, features. First, there is the mirror (which employs the old joke of leaving the artist out of the reflection) which comes close to having a slice shaved off its frame. Then we are left guessing at what that might be behind the young lady. The end of a fireplace, perhaps? But what is it doing there at all? Is it strictly necessary in the pictorial scheme of things? (An answer in a moment). Finally, over on the other side, is the oddest feature of all. Or rather, there isn't. There is something missing: his elbow, and a good part of his lower right arm.

Now, there is an excellent website, here, that shows 172 of the prolific Mr Kilburne's domestic and genre scenes, pretty much all of them peopled; and in only two or three of them does he trim part of a figure, and even then only of somebody incidental to the action. But our fellow is not a mere adjunct. There are only two people in the picture. This chap is the main man.

You begin to wonder if there has been some cropping going on, and someone has taken the scissors to the original canvas to shift the demoiselle to the left and make her a tad more centre-stage. However, so far, I haven't come across what might be an uncut version of the original of this particular work on the web (for which, incidentally, no-one gives its physical whereabouts). By the way, I am discounting - or, more accurately, not pursuing - the possibility that, for Tweeting or e-circulation purposes, it was digitally edited to adapt its aspect ratio to the hand-held screen (God forbid); for if so, then the original (un-cropped) should be out there somewhere. (Remember this?)

But maybe the half-arm, the truncated fireplace, and the sliced mirror are deliberate. And with that thought in mind, reflect on this next image, A Hopeless Case, the near double of A Game of Chess, by the same artist:

This may not precisely be an un-cropped version of A Game of Chess as posited above, but if there was one, A Hopeless Case must come pretty close to how it might look. Pretty close, but not close enough.

Look at them side by side, and let's take it that the colour reproduction does justice to the artist's intentions (a big 'if', admittedly).


In the wide-angle A Hopeless Case (now on the right), it is now the attention-hogging chap who looms large, framed perfectly as he is - and he alone - by the decorative beading; while the impact of her scarlet fan is diluted by the curtains, just where your eye wanders off to see what is in the other room beyond (Ah ha! A fireplace. Or the other end of it, anyway). Her delicate complexion is here bleached out by the refulgence of her gown which, in this version, floods out into the foreground, and forwards across the board to illuminate our rough-hewn hero.

The function of the mirror in A Game of Chess (on the left) is now apparent. It is not there to recycle a gag about an artist who isn't there, nor even, with casual flattery, to reflect back an à la mode and no doubt rather expensive chandelier; it is there to join with the jacket and boots in a dark arc to contrast with the luminous lady. Along with that odd half-column behind (whose purpose is now revealed), it is a device to lock her into the limelight and make her a bit-nearer-the-centre-piece.

So, now that we have examined the two versions, how about a shot at a working hypothesis concerning the relationship between them. It might run like this: the Mr. Kilburne knocks off A Hopeless Case, settles back pleased with himself, sleeps on it, and then, in the cold light of morning, the defects - as indicated above - smite him as if he is slapped by a lady's fan. She has been upstaged and, dear Mr Kilburne, that just would not do.

So, he has another go. A Game of Chess is the artist's second stab at this charming composition whereby he tries to put right what he realised - duh! - were the shortcomings of his first, i.e. A Hopeless Case. And, as a corollary, you might even wonder whether that title is really his own assessment of his initial effort.

Of course, with our EPTAS experience under our belts, with its jiggery-pokery of customised versions for different clients, an intriguing additional possibility suggests itself; especially as the wittily ambiguous title A Hopeless Case, when applied to the narrative, is so appealing: which suggests that the artist has put some serious thought into it, for a commission, perhaps. Yes, perhaps the focus of A Hopeless Case on the preternaturally endowed fellow was intended. Perhaps he had had it painted precisely as a portrait of himself in a period piece: as a conceit; as a handsome depiction of himself attracting the stolen glance of a pretty lady while gallantly letting her win the game. In this self-indulgence he made certain sure that he was depicted in his complete glory, with no part of his athletic frame, an elbow for instance, straying outside that of the picture itself.

We'll look at more flirty glances in a week's time. The health warning will remain in force.