I stopped playing regular chess a few years ago, for a variety of reasons which I won't bother going through here, but while I'm reasonably sure that playing less chess is good for you, it's not quite so good for the standard of your chess. Maybe less so when you're younger - I had a six-year break from serious OTB after 1983, and didn't play noticeably worse when I picked up the thread in 1989 - but when you're fifty it doesn't work like that. Bits go missing. Bits would probably go missing anyway, I know, but without regular practice they go missing all the faster. 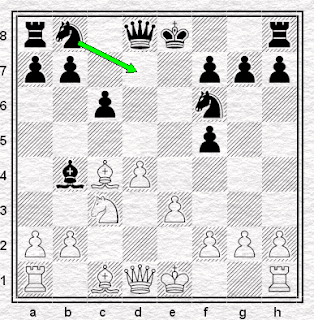 which is the kind of error that makes you wonder why you bothered turning up at the board in the first place.


At the time, I just attributed the error to being a little stale in my Slav theory (as well as never having met 6.Nh4 in my life) which is true up to a point, just as it's true that a major reason for knowing theory in the first place is so that you're not practically lost five minutes into the game. And for sure, one aspect of lack of practice (I don't think I'd played the Black side of a Slav for years) is that you're liable to forget those bits of your repertoire that haven't had a recent workout. 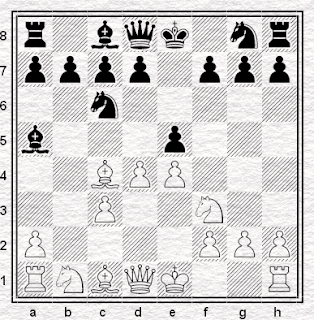 which I'd read up on plenty, since my previous two games in the Evans had gone 5...Be7 and I'd not been happy with them. Anyway I pushed 6...d6, went on to win and it was only a few days later that I remembered that I don't "play" that move at all. What I'd once spent many hours studying was in fact 6...exd4.

Who cares, you might ask, seeing as (a) I won (b) 6...d6 is a reasonable move (c) it was only a blitz game up the pub. True enough, but it's also true enough that forgetting your repertoire is how you lose serious games without giving yourself a chance.

Thing is, though, it's not just forgetting the repertoire as such. It's forgetting the patterns. I played some pretty poor chess at Aberystwyth, some much worse than in the following examples, but then again I've always played lots of bad chess. My contention here is that there's a kind of mistake I'd have been much less likely to make when I was playing every week instead of once a year. 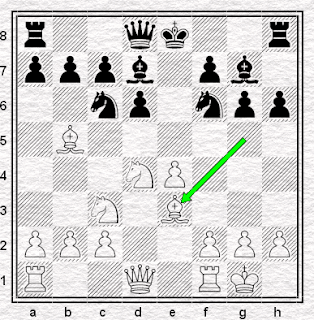 and there's an obvious move here that I didn't play, preferring to castle instead. (We later agreed a draw.)

10...Ng4 doesn't win, but it surely leaves Black a least a bit better, instead of maybe a touch worse. Equally to the point, in the sort of position that arises, after 11. Nxc6 Nxe3 12. Nxd6 Nxd1, he ought already to be "playing for two results", so there would be little danger of zero out of four.

What I'm trying to say is that 10...Ng4 is the sort of move you're always looking to play in that kind of position, with your bishop on g7, its homologue on e3 and the g4 square available to the knight. This comes up quite frequently in the Lopez. I'm pretty sure that I saw the move was playable (I was going to add "at least", but I'm not so sure that having seen it and not played it is better than never having seen it) but for some reason gave it a miss. When in practice, and with the slightest self-confidence, I'm sure I'd have practically bashed the move out.

Then there was my seventh-round game against Lee Davis, one of several disasters I inflicted on myself during the tournament. This was a line of the King's Indian which over the past fifteen years I've played many, many times - but I'm not sure I'd previously had it on the board in the present decade. 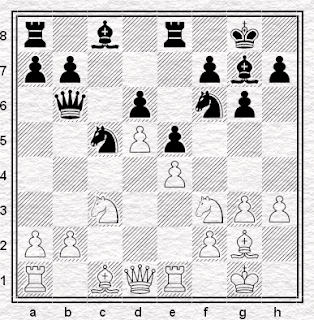 and now White has various ways of achieving relatively little, like 13. Rb1 or 13. Bf1. Still, Portisch writes that

which is good advice, and better advice than "forget that your opponent is trying to do anything and just play your own plan regardless", which is how I came to play 13. Nd2?? - a move that doesn't lose according to my computer, but does lose (and did lose) according to me. 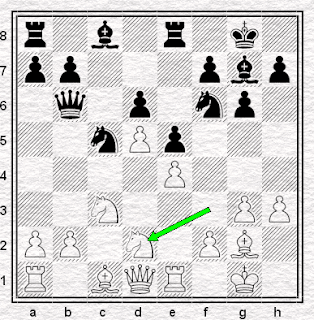 Now 13...Nd3 and ugh. You can look the rest up if you want (I almost fought my way back into it, only to think for half an hour, at the very point I thought I'd reached equality, and over that half-hour, realise I was lost) but I won't be showing it here. It's too horrid and too stupid.

Careless, yes. But simply to say "careless" suggests that in order to avoid blundering, I needed to pay closer attention. Of course I should normally play closer attention than I do, but in truth I think I'd have avoided that particular blunder simply by playing more.

Because when you play that variation, the fianchetto against the King's Indian, regularly - as I used to - that's what you're doing in the early middle game, trying to stop Black getting in. The idea is that if you can organise that properly, then your space advantage ought to take over. But in the immediate, you're just keeping Black out, and what that means above all is avoiding any tactics with the knights. That's not anything extra, it doesn't require any special concentration, you don't have to remind yourself, it's just your standard operational.

I bet I do it all over again next month.

Your first variation is kind of illegal. At least I cannot find the move that freed your bishop to take on c4.
Ah, you actually played Bxc4 twice, so that'll be e3 first.

If only all errors were so easily erased.