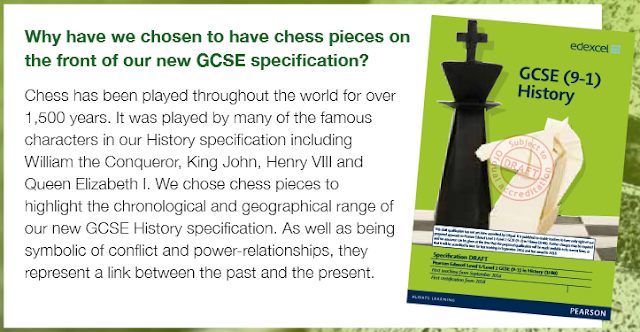 I am a history graduate who writes for a British chess blog and I was naturally interested in the prominence of chess on your GCSE specification. In particular this passage* caught my eye:


Chess has been played throughout the world for over 1,500 years. It was played by many of the famous characters in our History specification including William the Conqueror, King John, Henry VIII and Queen Elizabeth I.

I wondered: what is your reason in each case for stating confidently that these four monarchs all played chess?

When it came to the new GCSE specification we really struggled to think of an origami image that wouldn't just represent one specific topic. We though of a castle but this wouldn't result in a striking origami image. We had the idea for chess pieces largely because of the symbolic images of the King, Queen, Knight etc and we wanted to highlight the fact that new GCSEs were changing with the introduction of medieval and early modern history so it seemed a nice fit.

The passage you are referring to was written as a marketing piece so it's not been heavily researched. We did, however, find reference to chess being played by early monarchs on many websites such as


Around 1060 William the Conqueror was playing chess. There is a reference that he broke a chess board over the head of the Prince of France during one of their games.


There were also games that the Queen could play on wet days or winter nights, such as backgammon, or chess, or cards. Queen Mary I had been an avid gambler, and it is likely that Elizabeth too enjoyed a wager with her courtiers.

Thanks very much for your reply.

As I'm sure you've surmised, my point here is that even though it is only a "marketing piece", the literature we're referring to is advertising an educational qualification in the discipline of history and therefore if it makes a definite statement about given historical figures, it is, to put it mildly, ironic if those statements are based on either no evidence, or on unsupported speculation or - at best - an internet article of unknown authority which states "there is a reference" without even saying what that reference is.

I appreciate we are talking about GCSE rather than a PhD, but even at that level the study of history is about evidence, and pupils are surely encouraged not to write things for which they cannot find slightly better evidence than seems to be the case here. Am I right?

PS The best reference I have so far found for the William the Conqueror story (and indeed one for King John) is this 1804 book which is cited in this article. William died in 1087 and John in 1216: one might wish for something a little more contemporaneous. Still, it is better than nothing!

I do take your point and please be reassured that this text will only be used in the marketing brochure to publish the spec - it isn't going to feature in the actual specification. Thanks for the link to the article too - an interesting read.

But did they suffer from dementia?

And it led almost directly to war.

Elizabeth I certainly played chess as well as cards. I recommend Alison Weir's excellent 'Elizabeth the Queen' for more details.

There was a quote in some chess history book (can't remember which) that Henry VIII had more chess sets than wives!