Brigitta Sinka isn't the only person giving a simultaneous this weekend. Just as he did last year, Jonathan Rowson is doing the same, in Fulham, and S&B blog readers are invited to turn up and play. 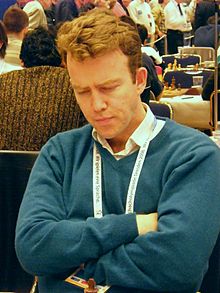 It's to raise funds for Brandlehow Primary School, which Jonathan's son attends, and it runs from 11 am to 2 pm. First come first served, though even if all boards are filled Jonathan expects (or hopes) to beat some juniors quickly enough to free some up.

It's five quid a throw for adults, three for kids and "further donations encouraged from those who can afford it". Cupcakes will be available at four for a pound.

Nearest Tube East Putney (District Line) and nearest overground Putney. If you're in London tomorrow, why not give it a go?
Posted by ejh at 9:55 am