Tweet your favourite #chess bookshelf! asked Jonathan Manley of Kingpin fame. What follows is not my favourite exactly. Just all my Pirc/Modern books. 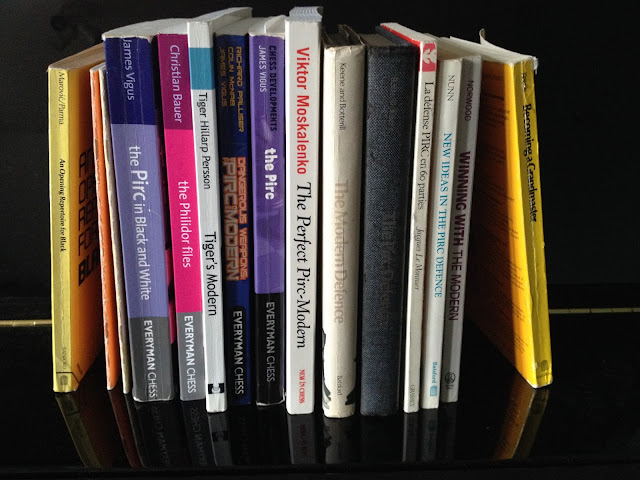 we saw last week - all secondhand. Here are the rest.


Becoming a Grandmaster (Keene, Batsford 1976)
Not a specialist Pirc / Modern book, but worthy of inclusion here nevertheless.  "This is the first book to be written by a British Grandmaster" goes the back-cover blurb and very obviously a rushed out 'cut and paste' job to make sure that it was. It’s still an interesting read, though. Perhaps not quite as interesting as it might have been if Ray had really put his back into it.

Anyhoo, BaG has a section on the books that Ray had written and a part of that is on his Pirc and Modern work with George Botteril from the early 1970s.  I particularly rather like his games against Gligoric (Berlin 1971) and Hecht (Teeside, 1972).

An Opening Repertoire for Black (Marovic & Parma, Batsford 1987)
A book from the days when you could cover the Queens Gambit, the Benoni, The French Defence and the Pirc - not to mention all the sidelines - in a single tome. No idea why this didn’t go in The Great Terror that saw 100+ chess books flogged off (this sister book, RDK’s An Opening Repertoire for White, certainly did, as did John Nunn’s second book on the Pirc), but it’s still here.

AORfB dates from a brief dabble with the Pirc from my student days. That also happens to be the period when I happily bought any old shite. In the Austrian attack sub-section of the Pirc chapter there is no game quoted that was played after 1975 - more than a decade before the book was published.  Even allowing for the fact that theory developed much more slowly in those days, Batsford were really taking the piss with this book.

Tiger’s Modern (Hillarp Persson, Quality Chess 2005)
A Christmas present from the first time I considered taking up the Modern which would be circa 2010. I’m still to get around to actually playing 1 ... g6 against 1 e4 or 1 d4 in a real game. I did give it a punt against 1 f4 at Golders Green in August, at least.

The Philidor Files (Bauer, Everyman Chess, 2006)
An impulse purchase inspired by the idea of developing a repertoire that would allow me the option to play the ending 1 e4 d6, 2 d4 Nf6, 3 Nc3 e5 4 dxe5 dxe5 5 Qxd8+ Kxd8 as well as 3 ... g6. Never played it as yet - although I did  have a go on the White side against Julien Shepley at Hampstead a couple of months ago. After the game Julien pointed out the downside of the system: it can be difficult to generate winning chances as Black. He kindly avoided mentioning that he had just rolled me over rather easily, nevertheless.

The Pirc in Black and White (Vigus, Batsford 2007)
The one that restarted it all. I’d been vaguely thinking of taking up the Pirc and borrowed a copy of this book from Angus. A swift flick through later, I decided that I didn’t much fancy the 4 Be3 variation.

Before I got to give TPiBW back, though, I suffered a leaky bottle catastrophe in my bag. One of the casualties was Angus’s book. Upshot one: Angus got a new copy and I ended up with the water damaged version. Upshot two: I had another look and decided I might be able to deal with the 150 Attack after all. 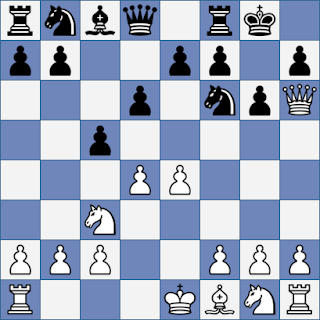 Whatever Vigus might tell you, this line is total junk. Not that I’ve let that stop me doing rather well with it.

Chess Developments The Pirc (Vigus, Everyman Chess 2012)
I actually bought this brand new.  My last new openings book ever I think. Vigus downgrades his assessment of the 6 ... Bh6, 7 Qxh6 variation to "rather risky" which is still more than a tad optimistic.

A birthday present. This is the latest in Moskalenko's series of alliterated titles for New in Chess. Here’s hoping that The Bollocks Blackmar-Diemer and The Lachrymose London will follow.