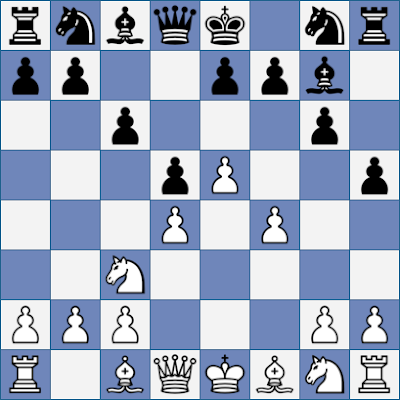 While some of the players of the twenties might just have played Black’s first four moves I don’t think anyone but a modern - not even Nimzowitsch - would have played ... P-KR4 so early. Black is fixing his grip on KB4 for his knight and the blocked position means that the loss of time does not matter.


I think I’m over it now. The compulsive completely unnecessary purchasing of new openings books, I mean. It might have taken 25 years but I think I’ve moved on.

Coincidentally or otherwise, I seem to have developed a raging 'purchasing of secondhand openings books' habit of late. Methadone to my previously preferred heroin perhaps. If nothing else, it is at least cheaper.

My latest addition, David Norwood’s Winning with the Modern, I picked up just last week. 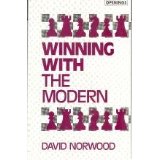 Nozzer's book is rather interesting in its own quirky, somewhat ramshackle kind of a way. Much like the opening itself, I suppose. Anyhoo, while WWtM contains lots of fascinating games, many of which are by the author himself - as positive a sign in the 90s as it is today - it has to be said that the book hasn’t been put together with quite as much thought as might be hoped for. 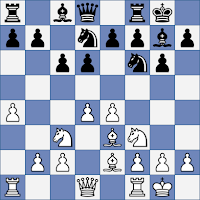 Any reader who has worked his or her way through 1 to 57 might reasonably suspect that this is not just be an expression but could be literally true. The notion of advancing the queen’s pawn a second time popping into Norwood’s head as he was in the middle of typing out the page.

"If this idea is codswallop, then Black needs some new ideas against 8 Be3" is Norwood’s conclusion. Other than 8 ... e5 (which is assessed as better for White), Winning with the Modern doesn’t supply them, though. So if the speculative pawn push doesn’t stand-up the book’s suggested line against the Classical becomes unplayable and you can’t switch to ... Bg4 systems instead because WWtM has Black committed to a very early ... c6 to give an extra option against the Austrian Attack.

It is by no means an exaggeration that the entire book hangs on a move which has just come off of the top of Norwood’s head and which he analyses for less than half a sentence. 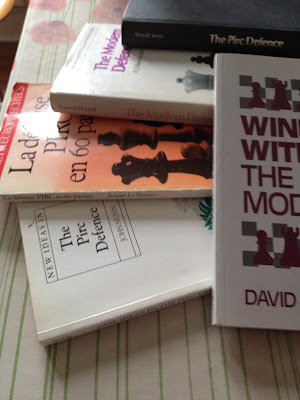 Talking of the Austrian Attack, WWtM's suggestion there is the Gurgenidze system. It’s an interesting choice that that has Black rejecting the usual Pirc-Modern strategy of a dark-square counterattack in favour of a light-square blockade. Dodgy or otherwise (my guess is the former) it does at least have the merit of being something that Norwood was prepared to play himself. The chess world would be a whole lot better place, I feel, if somebody passed a law banning authors from recommending lines that they had not punted in rated games

Not that Winning With ...  was the first book to take a close look at The Gurg*. Keene and Botterill had an entire chapter on it. It’s where I found the Alexander quote at the top of today’s blog.

There’s something rather lovely about somebody discussing modernity whilst using descriptive notation. It’s as anachronistic as K&B’s choice of

as their title for the section of their book that describes a range of different systems that are related to, but subtly different from, the Gugendize proper.

Don’t let an overdose of quaint blind you to the fact that the game that Alexander is annotating - Honfi against Gurgenidze from 1968 - is great fun. Black pretty much bashes in White’s head using just minor pieces and pawns. At the moment the decisive blow is delivered on move 26 Gurgenidze's king is still in the centre, his rooks lie untouched on their original squares and his queen has only made it as far as e7.

Superb stuff. Just the sort of thing that inspires me to take a closer look at Norwood’s analysis, in fact. If I don’t get distracted by some new old book purchase, that is.

* Copyright John Hickman
Posted by Jonathan B at 8:00 am

Honfi did in fact have a plan and it works provided you don't get mated. What he should have done was to keep his King safe by castling short and then play to round up the pawn on h4 as he was attempting to in the game. I think I recall finding this suggestion in a John Nunn book, but it must have been one you haven't got yet as it was 1990 at the time.

One acid test of old books on the Pirc and Modern is whether they recognise how dangerous the 150 Attack with Be3 or Bg5 can become particularly if White plays Nf3 or f4 rather than f3.

You’re talking about Nunn’s The Complete Pirc I think Roger. I did used to have that - bought it while I was at University I think (which would mean a publication date between 1990 and 1992 or so) - but it went with a lot of other books (around 100) a few years ago in what I now think of as the Great Terror 100+ chess books flogged. Many bought back since.

Funny you should mention 150 Attack. I was going to make exactly that point myself in a couple of weeks.

c6 set ups against the Classical Pirc are fine. It's meant to be a bit more accurate to play Qc7 first. You can do the Philidor fiddle (b6/a6/b5) on the Queenside and play e5 at some point. d5 can be played when in Philystyly to, but not sure about playing it on p58

The Complete Pirc. Got this at a time when I, like most chess players, didn't pronounce Pirc correctly, e.g. I played like a complete Pirc

The 150 attack. Due to rating inflation, this should now be called the 160 attack. It is best met with the 120 defence.

Yes, time has come to the rescue of David Norwood with regard to the ... c6 system. ... Qc7 and then ... e5 in the position mentioned (or, as you say, ... Qc7 before ... Nbd7) anybody relying only his book might have found themselves in a pickle. That section did strike me as rather too slapdash even when compared to the generally low standard of chess opening books (and Winning with the Modern is far from one of those low standard books in most respects).

There's background involving the match between the Soviet Union and the Rest of the World. As many will recall, Fischer took board 2 in that 1970 match and thus faced Petrosian. With the white pieces Fischer faced the Gurgenidze system and by analogy with similar positions in the Benoni ( a4 v a6) prevented the advance of the h pawn by playing g3. It became received wisdom that was the correct treatment until the Nunn book which suggested that Honfi was right all along, that you should provoke .. h4 in order to surround and win it.