Our investigation of chess in World War 2 - in War Game # 4 through to #7 - described how Great Britain had become the rallying point for combatants who, having escaped occupied mainland Europe, now aimed to help expel the German invaders from their home countries. Thus Dutch, Norwegian, Czech and above all Polish and French fighters found a place of relative safety here, to regroup and contribute to the Allied war effort.

Among those taking refuge were a number of strong chess players who happily engaged in whatever domestic chess action there was, including, as time went on, organised matches against teams of British servicemen. Foremost among these refugee chessers was the already famous Dr Savielly Tartakower - he had been decorated in the First War (in which, incidentally his brother was killed) - albeit he was now known as Georges Cartier. It was said that his real name was difficult to pronounce.

One easier to say may have been that of Maxime Chauvet, mentioned in our earlier posts. Lieutenant Chauvet was a talented player (although by no means as strong as "Tarta") who briefly charmed the domestic chess scene, particularly in London. He appears to have arrived in 1941 serving in an Intelligence Corps with the Free French (the Bureau Central de Renseignements et d'Action) before he was called away in the summer of 1943. Here he is caught on camera, in uniform, at the Sidcup Congress in August 1942 in which he came 4th.
Intrigued by this genial Frenchman I have been digging around and, in the course of a piece of fruitful cross-channel co-operation with Dominique Thimognier of the vraiment formidable site Héritage des Échecs Français, we have begun to recover the Chauvet story - though some mysteries remain.


You can see the Chauvet page on Héritage here, with another photo of him. The page gives a number of his games and coverage of what we know about his life. As the French is reasonably guessable, we won't repeat too much of it in this post. Instead we will recount Lt.Chauvet's participation in the West London Chess Club, an aspect of Chauvet's time over here into which Héritage doesn't go in much detail.

This also gives us the opportunity to salute another piece of war-time chess endeavour: the West London War-Time Chess Gazette produced by the West London Chess Club. Its first issue was in November 1941. Individual copies from the war period seem to be virtually non existent today, although there is a reproduction of a sample from April 1946 on the West London Chess Club website here. However, there is also a rare, bound, consolidated edition which preserves the issues up to number 81 of 1948, and this shows that the Gazette appeared more or less monthly during the war - a tremendous achievement in the circumstances.

No 1 gives C.T.Ley as the Editor of the Gazette, address 33, Keswick Rd., Putney, S.W.15. He was also given as the Honorary Secretary and Treasurer of the club. Throughout the war period it reported club tournaments, championships and other internal goings on; it also kept readers up to date with club personalities, including several obituaries. As the war ended it reported on the reconvened Leagues, BCF congresses and debates. After the war it seems to have appeared intermittently, until it ceased altogether in the 1960s (see the WLCC website's history pages).

The consolidated volume for 1941-48 appears to be typeset (whereas the example on the WLCC club website is mimeographed) and was printed by A.G.C., S.A., Pantoja, 6-MADRID, presumably sometime after 1948. It doesn't have an ISBN, and is not in the British Library. One is left wondering who arranged for this edition, and paid for it - and why; though we can thank them for preserving the Gazette, in this form, for posterity.

This edition contains photographs, but possibly they are inserted only into the consolidated volume - it seems unlikely that they could have been produced for the wartime mimeographed issues. Here is an example interleaved with issue 21 in June 1943: it shows Drs List and Tartakower/Cartier in play - the latter also in uniform - but it is not clear exactly where or when. 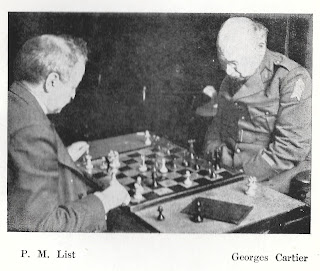 The Gazette is uniquely helpful in documenting the participation of "Tarta", and - our principal interest here - Maxime Chauvet, in the club's war-time activities.

The first mention of Chauvet was in a 14 board match v Hampstead CC on April 11 1942, when Chauvet was on board 12 beating F.S.Hess. In the next issue (June) he was to take part "in a most interesting Invitation Tournament" at the residence of Lady Janet Clerk, but he finished an "also ran". (Lady Janet Clerk - painter of this, and this, perhaps?)

Vera Menchik was the Director of Play at this event for 16 select participants - and here she is at the August 1942 Sidcup tournament - from the Evening News of 10 August.

A regular and popular feature of West London Club activity was the Wednesday and Saturday "Greased Lightning" tournaments (10 or 7.5 seconds a move). On June 10th 1942 Lt. Chauvet won the top section "in his best form scoring 5 wins and 2 draws. His game with L.Klugmann was an interesting 19 move affair - drawn by repetition of moves...The game was published in the 'Evening News' Chess Column on June 23rd."  Or so said the Gazette in its July 42 issue. Except that it wasn't; nor in the Standard - at least, not far as I can see, and I've looked twice. But that's just a minor Chauvet mystery...

Chauvet gets another mention in October 1942 for appearing in the Club's 50th anniversary tournament, and then again in a report of the "United Nations" match (i.e. the second British v Allied Services contest)  in November 42 - the latter due to "Mr J du Mont's unsparing energy" (see Héritage, and War Game 5 for details). Chauvet is also reported as taking part in several further lightning tournaments - the one of June 9th 1943 being noteworthy for a stellar line up (in final order) of "Georges Cartier", Vera Menchik, Jacques Mieses, Sir George Thomas, E.G. Sergeant, J.H.Parr and A.J.Peters. In this company Chauvet could only manage to finish ahead of Lt.Peters. As for Tarta's performance the Gazette had this to say: "The feature of the evening tournament....was the entry of Lt.Cartier. Playing without the slightest hesitation and most precisely, he defeated all opposition, and as far as could be seen was never at a loss for the right move. A wonderful exhibition of quick thinking.”

Here is a game from a lightning tournament a couple of months later in which Cartier quickly disposes of Lt. Peters.

In that issue of June 1943 the Gazette reported that "Lieut. Maxime Chauvet is leaving us for a while. His parting gift to our Library of several Chess Text-books will be happy reminders of this charming soldier from France.” He also donated, to the BCM of May 1943, the following piece of chess trivia, challenging you to find a losing move for Black... 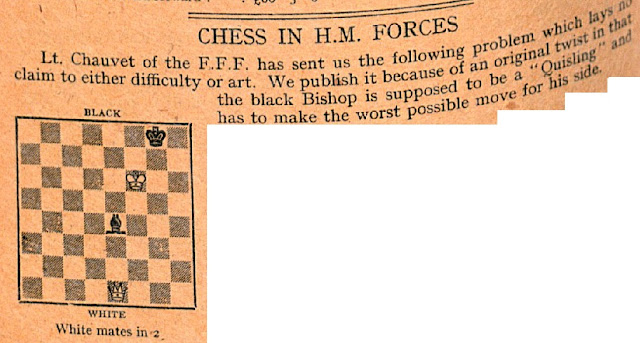 ...after which, leaving the country wasn't perhaps such a bad idea. His departure was also mentioned by the BCM of August 1943: "His numerous friends will miss this interesting and sympathetic personality."

His absence was to be, in fact, for a good deal longer than "a while". A couple of years later, in 1945, he still had not returned and so was being remembered as a "popular member during the war...[w]e hope to see him when he re-visits England"; and the Club instituted a Chauvet Medal for the lowest section of its internal Tournament. As far as I have been able to ascertain, neither the medal, nor his donation of books, survives today at the club.

A lot was happening for the Free French in the summer of 1943. So, for example, Chauvet's departure coincided with General de Gaulle's formation of the Comité français de Libération nationale in Algiers. It would be pure speculation, however, to guess at a precise role for him, and from the summer of 1943 we lose track of Lt. Chauvet until after the war in November 1945. Then there is a record showing that he travelled by ship from now liberated France (perhaps even starting his journey from Paris itself) to the States. Here is an extract from the manifest of the S.S.Croix showing him sailing from Le Havre to New York in the company of another Chauvet - Marcel. Both of them are listed (bottom of page) as attached to the French Army:
﻿
There is a suggestion that his eventual destination was Mexico, where other domiciled Chauvets are documented.

Dominique Thimognier of Héritage has found a Max Chauvet playing correspondence chess in the States in 1981. If that is our Maxime, who was born we think in 1907, he would by then have been 74 years old. We know that Maxime Chauvet played correspondence chess in France pre-war, and also in England as soon as he arrived in the early war years. He appears several times in the BCM's reports of the British Correspondence Chess Association competitions, winning the best game prize in the Premier tournament of 1942 for this nice win (reported in BCM December 1942).
So the final trajectory of Maxime Chauvet remains the biggest mystery of all, unlike that of his illustrious compatriot Savielly Tartakower who continued to be well-documented, including in the Gazette in the later war years. Among other things he gave a number of simuls for the club - something he was to do tirelessly throughout to raise money and morale for the war effort.

In Issue No. 24, October 1943 the Gazette was "glad to announce that Lt.G.Cartier of the Fighting French Forces, the world famous Master has consented to become an Honorary Member of the Club”, and in appreciation of his association with WLCC, he had this to say in a letter of thanks:

Which needs no translation, and is a nice note on which to end.

With considerable thanks to both Dominique Thimongier at Héritage des Échecs Francais and Richard James (for the loan of the WLCC Gazette); and also to Andy Hayler at WLCC.

They need to tidy up these pages and links.

Thanks for note GK.