Know Attila the Stockbroker? Course you do. Professional poet for most of his adult life, previously a stockbroker for rather less time than that, known for works like Contributory Negligence and his collaborations with John Otway.

Anyway just the other day I happened to contact him* on Twitter and he surprised me by saying this, presumably in response to my Twitter handle mentioning chess. 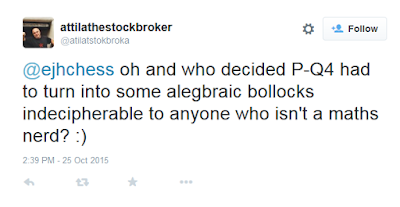 What is the gentleman's problem with this? Well apparently...

Well I never knew he played at all. But this is interesting, isn't it? I'd always thought that lots of older players found the change from descriptive to algebraic, which in the UK at least took place in the Seventies and Eighties, hard to handle, and even now I assume that some players never managed it and continue to write their moves using the older style. But I'd never heard previously that it was a problem for younger players, who aside from having the advantage of youth, when it is easier to adapt, would generally have seen literature in both styles from soon after having learned the moves - and hence had little difficulty.

Well all right, Attila is older than me - fifty-eight - and would have been fifteen, for instance, when Fischer beat Spassky. So that was old enough to have been made uncomfortable by the encroachment and eventual takeover of descriptive by algebraic. I'd not previously heard, though, of anybody from the Fischer-boom generation who was sufficiently discombobulated to stop studying the game. Are there any more examples, personal or anecdotal, of this syndrome?

[* it so happens that he went to a school where my father-in-law then taught and I wondered if they remembered one another - they don't.]
Posted by ejh at 7:55 am

There are quite a few club players who still use descriptive - indeed, one still sees it at congresses even though it is not supposed to be used there.

In my experience, though, the opposite complaint - that descriptive is some sort of undecipherable hieroglyphics - is the more common one. Which is a shame, as those people are missing out on a rich slice of chess history.

There's one player at my club who uses descriptive. I am better at using it than he is.

I used to use only descriptive, and used to agree with AtS' point-of-view. I still have many chess books in descriptive, some of which I love, but I find algebraic much easier both to read and write, now. When I used to write: KR-QR1(ch), u.s.w. I'd be liable to lose on time. Writing Rha1 is much quicker and easier.

Worst of all was that (thankfully brief) period during which Chess (Sutton Coldfield B73 6AZ used to *combine* (i.e. mangle both) descriptive and algebraic. Anaethema.

Descriptive is far too clear. I think we should still use stuff like:
1. White: K P two squares
Black: the same

I appear to have changed in two bites. The first change was abandoning the English P-KKt3 in favour of the American P-KN3. The second, about a year later was abandoning both for g3. I can recall the reason for the second change, it was because all the top players at university would talk about controlling the e4 square and other similar concepts, so it was necessary to switch in order to understand. There was also an element of snobbishness for early adopters. We/they felt superior to descriptive users. There was a certain element of truth, material like the Informators was only available in algebraic, so you hoped to know things your descriptive using opponents didn't.

As to when it became universal, probably not until the mid to late 1980s. I think when BH Wood sold out to Maxwell and the magazine went A4, that was when the parallel descriptive edition was abandoned.

The historic collection of books on the Pirc and Modern mentioned in other posts would give some indicators as to when publishers changed over. Books on openings would likely be the first to switch, a process probably started by Ray Keene with "Flank Openings"

It was from "an ordinary chessplayer".

It's a bit like a language. The language you learn as a child (in my case descriptive) is likely to be more natural than one you become fluent in later. I am now fluent in algebraic (come on, it's not that difficult after all) but actually reading old descriptive books is somewhat more comfortable and certainly more nostalgic.