I scrape part of my living by trying to teach some English to Spaniards, mostly young. There's a level of interest in the language which, when you're used to an English attitude to languages (where if you can say "je m'appelle Justin" it's considered an achievement) is hard to believe. Here, in a town of around fifty thousand people, there's around a dozen private schools of English, catering for all ages, and an official Escuela de Idiomas which teaches its students French, English and German. There's also a couple of bilingual primary schools (where a large proportion of the lessons are given in English - or French) which is, I believe, twice as many as there are in the whole of England.

Despite this, there are far fewer English books in bookshops and libraries than you might expect (though rather more than there are Spanish or French books in most English bookshops and public libraries). And some of those that are available are written specifically for the purpose: short books in English of a certain standard, these standards being defined pretty clearly. Personally I always advise students not to bother with this and to try and read a proper book instead - I tend to recommend Thomas Hardy or Graham Greene - but they are used and read by a lot of people.

Which is why I came to be looking at Dangerous Game in one of Huesca's public libraries. It's obviously been used for many years in teaching English, since not only does the edition I am looking at date from 1992, but is a reissue of a book first published in 1977. What you can't see from the cover reproduced above - which is a different edition to mine - is the picture on the cover of my copy, a picture which depicts not just a chessboard, but a snarling cat. Naturally this combination attracted my attention and I borrowed the book to investigate it further.

It's the story of a writer, living alone in his house, his wife having died years before, who plays a weekly game of chess with his friend Louis. Meanwhile he suffers daily from visits from a poltergeist. The spook eventually kills him (though not before the cat makes its appearance) and this story takes place over ten chapters. Each one of these is prefaced by a diagram showing a chess game - no particular game, as far as I could see - in progress.

The diagrams go as follows: 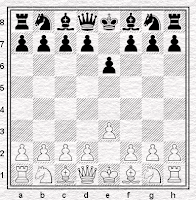 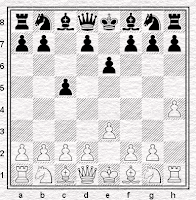 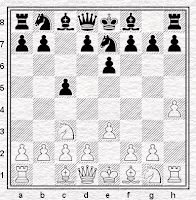 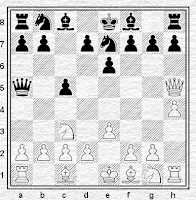 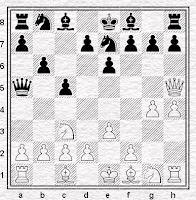 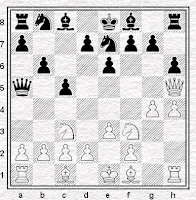 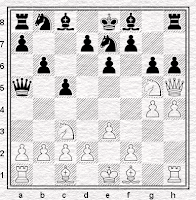 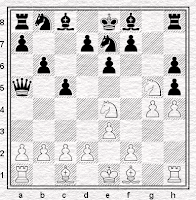 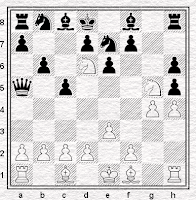 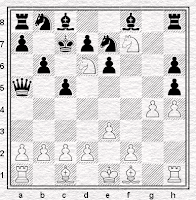 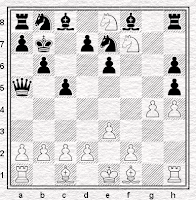 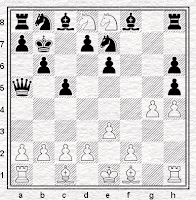 Now what's remarkable about this game is that despite the players being obviously of no great ability, White possesses the combinational vision to find a queen sacrifice which forces mate, and which, as far as I can tell, does so even if Black plays the rather stronger 11...Kc6 rather than 11...Kb7 allowing mate in one.

He takes a bit of a risk, though, since Black can win on the spot as long as he doesn't greedily take the queen at the very first opportunity. All for the love of the game, I suppose, though why the White player suddenly turns into Adolph Anderssen, having played the first few moves like Joe Bloggs, I can't imagine. Maybe he suddenly turned on his computer, which wouldn't have been much of an option in 1977, but might have worked in 1992?

It's a mystery. I know who we could ask, though. According to the copyright page:

The Publishers would like to thank Dr Jonathan Mestel for acting as a chess consultant.

Yes, that is odd.

I like the position in the last diagram though.