Our new pedagogical series in which we look at a portion of a game I played the previous weekend in which some obvious tactic is overlooked. Readers are invited to practice their skill by seeing if they can spot what was missed. 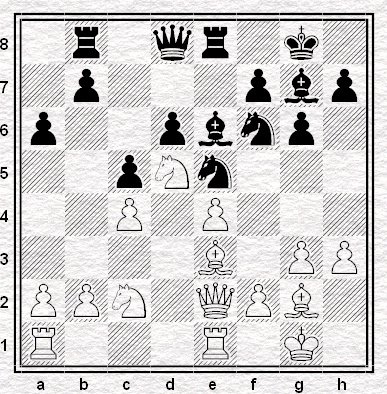 However, somewhere during this sequence one of the players missed a simple and winning tactic. Can you spot it? The game can be played through below if it helps. There were other serious mistakes as well...

(Again, answers in the comments box - so don't read it until you've had a go at solving it.)

Is it that you should have complained about black having three rooks?

(Sorry, I know this isn't the answer to the question which was put.)

It's also a possible answer to a post later this week, so I'd save it until then.

Diagam now corrected. I blame the absence of proof-readers.

It's a good idea (one of many in the sequence) but it's not a clear-cut win.

how about Nxe4 instead of Nb6?

Do you need me to tell you the reply to Bxe4? You are a much stronger player than I am and it is bleedin' obvious to me!

Yes Paul R but I'm setting the bleedin' question, aren't I? And you're supposed to be giving the whole bleedin' answer! And unless you actually give it all I don't know that you've seen it all!

This isn't answering the question, but in this sort of position (which I get occasionally, playing the English) I would tend to play 16. exd5 on the (possibly dubious?) grounds: (i) better Q side pawn structure for white and (ii) increases the scope of the g2B by one square.

OK, I can see that black has some potential threats against Ra1 and Qe2, but is cxd5 obviously the better choice?