I am fairly sure that proper chessplayers do not do their opening preparation while watching the football on the box. I, however, do: why not multitask when you have the chance, that's how I see it.

So on Tuesday evening I settled down to watch the second half of the Sevilla-Arsenal game with a cat on my lap, a pocket chess set in my hand and a few useful books (notably Emms and Kaufman) within reach should the cat permit. Now I'm not so foolish to think that this is the ideal environment for studying the main lines, but I saw no reason not to have a look at the Goring Gambit just in case anybody ever thinks it's worth a pop against my 1...e5.

I'm not so good at studying openings using a book: inevitably I get sidetracked, not necessarily by the football but by asking what if? questions. Which is what you're supposed to do, actually, but the trouble is that I start asking them at the first opportunity and then never actually get on to the part where you learn some of the lines you wanted to learn. In truth the normal outcome is that I decide the variation I want to play has a big problem with it and start preferring the line for the other side. 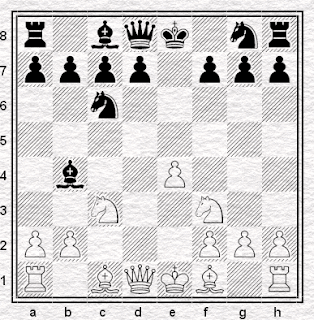 Now I remembered from earlier perusals that White normally plays 6.Bc4 and although 6...d6 is often played, both Emms and Kaufman recommend 6...Bxc3+ 7.bxc3 d6, on the grounds that if 6...d6 7.Qb3 Bxc3+ White can take with the queen instead.

All right, I thought, while registering the fact that Arsenal had had a penalty turned down. Suppose White plays the same game and switches his move-order to try and avoid Black's idea? Suppose the queen comes out first and White plays 6.Qb3. 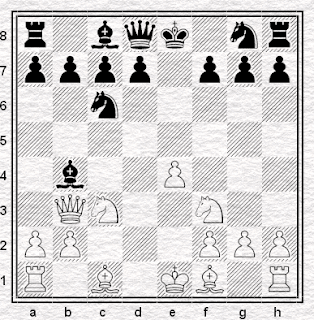 Now if 6...d6 7.Bc4 and you've got the position Emms and Kaufman wanted Black to avoid. But neither of them mentions this move-order, so is there anything obvious for Black in this position? Nothing I could see, not with one eye on the telly anyway, so I started asking myself if Black had a useful alternative to 6...d6 - what might he gain by White playing the queen out so early? And after a few minutes I came up with the answer: 6...Qe7. 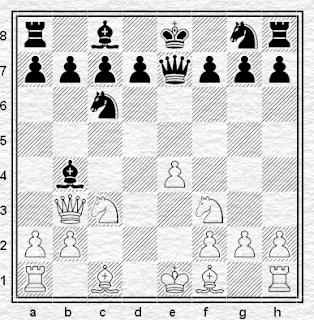 Now of course if White puts his f1 bishop on the desired square 7.Bc4 we have 7...Na5 since if 8.Bxf7+ Kf8 seems to win a piece. Excellent! But let's ask the question again - can White do something different? By now I was really rocking and it wasn't long before I came up with the idea of leaving the f1 bishop where it was and trying 7.Bd2! instead. 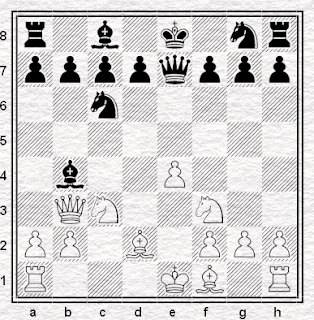 Because now if 7...Bxc3+ we can play 8.Bxc3 and then if 8...Qxe4+ 9.Be2 and surely White has compensation for two pawns with the king and queen lined up like that. 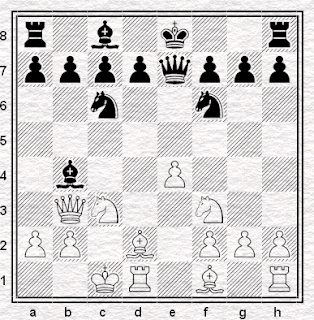 and you have a position I'm sure Robin Haldane would love to play. Well, I thought, there's a nice bit of original theoretical work for you, and I put the set aside so that the pussycat and I could relax and watch Sevilla coasting to victory in greater comfort.

In the morning, of course, I took another look and realised that my reputation as a theoretician probably needs to rest on rather stronger foundations than a few minutes' freethinking in the company of a cat and the Champions' League.

I was, after all, supposed to be studying this from the Black point of view, and half the reason I play 1...e5 is that a lot of people like to play stupid gambits in which they give up their centre pawns for practically no compensation, provided the Black player has a bit of experience and knows how to go about exchanging off White's short-term activity.

So, among other objections, 6...Bxc3+ 7.Qxc3 Nf6 looks perfectly adequate (we should get ...d5 in rather than ...d6) or indeed 6....Nf6 with the same idea. And no doubt a short visit to the computer screen would teach me rather more about this deeply unsound variation than I actually learned while watching the television.

Still, it might, as they often write, be good for a blitz game. And it's better than spending 45 minutes watching some football match that I'm not actually all that interested in. God yes. The day when I have absolutely nothing better to do than watch the Champions' League is still some way off.
Posted by ejh at 7:40 am