On Tuesday I invited readers to find a bad mistake in a game I played last Saturday, and advised them that the specific error was not the only one the game contained. In fact this was true from more or less the point at which the game left the books (14.Qe2?!) to the point thirty moves later where it was agreed drawn.

Still, there is perhaps more instruction to be found in error than its absence. If the earlier part of the game was useful for practising one's tactical skills, perhaps the ending is also an interesting exercise in judgement and analysis. After White's fortieth move, recapturing on e4 and finally escaping a middlegame in which he had been lost for some time, the following position was reached: 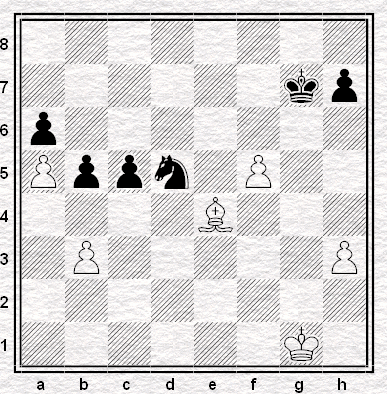 I know it's the wrong colour rook's pawn but the passed pawn might tie Black's king down for a bit and allow white opportunities to get at the queenside?

Actually f6 does more than that, Jonathan, it wins a tempo to get the bishop out of the way....

....I think Black has a better first move and it's not the only improvement I can find.

the thing about ... Ne7 is that is places the Knight two squares away from the Bishop.

I can't remember where I learned that as important but it's certainly worth looking out for ... because the knight then always stands a chance of being dominated by the bishop (i.e. it's potential moves forward are only to squares where the bishop could take it).

So I didn't think ... ne7 was probably best either - although I don't have a better move as yet.

Nb4 and K->e5 looks pretty strong to me.

I don't have a board around to move pieces on at the moment, but my first though was 43.Bb7, which seemed to win Black's knight for the a-pawn (obviously not 43...Nxb7?? 44.a6 and queens). But then it looks like 43...b4 44.a6 Nb5 stops the a-pawn. But this has still got to be better for White than the game, right? At least his bishop escapes.

Richard - quite right, I think that has to be the first move.

Dan - yes, and that's the move I missed, until about half a second after I offered the draw. In the immediate post-mortem I spotted your 43...b4 which gets the knight in the way of the a-pawn. But it's not the only move!

Incidentally, what differences, if any, would it make if I played it on move 44 instead, after the two king moves? And was it best to play 41...Nxf5?