If, as I suggested a while ago, our choice of openings tells us something about ourselves, it must be equally true for our favourite moves.

We've had quirky openings (from Justin and Tom), and the odd bizarre king move, but as often as not, our favourite moves so far have involved a good deal of wildness (or is that randomness? - see here here and my own first choice here and decide for yourself).

One of my all time favourite moves, on the other hand, is really quite mundane - nothing more than a quiet offer to exchange queens. It's not the move itself but the context in which it was played that continues to impress me nearly two decades on.

In the last round of the 1990 Manila Interzonal, Nigel Short found himself paired as Black against Mikhail Gurevich. The situation was clear, if not particularly rosey for our hero – while the former Soviet only needed a draw to qualify for the candidates matches, Nigel had to win.

Not exactly tossing caution to the wind, Gurevich played into the Exchange variation of the French Defence and after,

they reached this position. 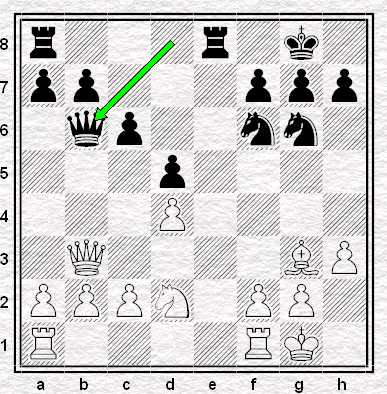 Now the idea behind 16. … Qb6 is apparent, even to me. If White captures then … axb6 is, in effect, a developing move because it opens up the a-file for the Rook. If White doesn’t capture then the Queen is stuck doing nothing on b3.

It seems Black is slightly better in this position and … Qb6 is not, in many ways, a difficult move to find. Still, to offer an exchange of queens in a position where the pawn structure is symmetrical and both sides have castled on the same side yet you have to win at all costs … that shows balls of steel I think.

In the pub after the recent Metropolitan tournament Andrew cited fighting spirit as the key weapon in a chess player’s arsenal. I’m sure he’s totally right, and it’s the character Nosher shows in slowly grinding down his opponent after the Queen swap that keeps this game right up there as one of my favourites of all time.

Perhaps it’s because I know, deep down, that I don’t have that prepared-to-go-to-any-lengths will to win myself that I admire this game so much.

I wonder if it's not a good procedure against a slightly weaker player to play much as Short did with the Black pieces.

Now in fact, as you can see, I blew the game at the end in time-trouble, but I put it to you that Black outplayed a decent-strength opponent for most of the game, with black, simply by swapping off the right pieces in the right way.

Playing this way definitely avoids the possibility of tactical accidents, but it's bloody difficult to do successfully (as you found out).

Very easy to nurture a small plus for the whole game then make one inaccuracy that leads to a drawn game (or worse).

It is, incidentally, exactly how Simon Webb recommends you take on weaker players (that is, weaker than you are- the concept is relative) in his book "Chess for Tigers"