Believing in the interconnectedness of all things as we do here on the S&BCC Blog, today's post is directly linked to two recent articles.

This position is taken from Kasparov - Anand, Reggio Emilia 1991, the tournament discussed last Sunday. Gazza has just played 24. Rh4 , "A nice move that tickles my queen from its ideal position" as Anand puts it. 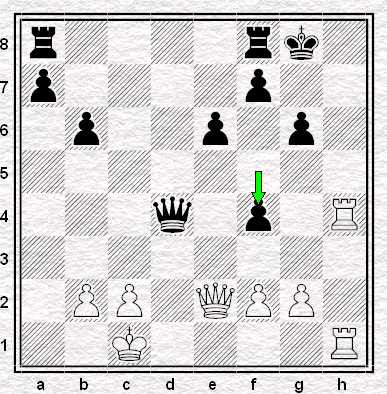 "I simply played this instantly. I did not calculate anything, but felt that 24. ... Qf6 should be losing. In fact, it is very close to it. After 25. Qe3 White had an incredible attack. The point is that without my queen hanging around in the centre I get no chances to counterattack his king. For example with Rac8, Rc2 followed by Rc8 and perpetual. All these lines I miss if I withdraw my queen. 24. ... f4 is simple and natural."


It seems to me this is a pretty good example of John Nunn's concept of DAUT in action(Don't Analyse Unnecessary Tactics - as you may remember from this post).

Anand reasons he needs his queen in the centre of the board to facilitate a potential counter-attack against White's king. Why bother, then, to calculate any variations when her majesty retreats? Sure the might hold on but by following Nunn's advice you avoid two unpleasant scenarios:-

(a) losing time analysing a move that doesn't work so you have to play the alternative anyway
or worse,
(b) over looking a tactic so you end up playing a move that turns out to be trash.

Still, you have to have a lot of faith in your intuition to play this way, especially when you're playing the World Champion and he's got a pair of rooks thundering up the h-file.

A great game by Anand. His intuition proved correct. But I guess that Kasparov's intition let him down on this occasion when sacing his pawns for what he thought was a winning attack. The choice of whether to attack or defend partly comes down to your style of play but when players clash like this it certainly makes for an entertaining game!

"Your choice of whether to attack or defend comes down to your style of play...."

Good point - and it has inspired me towards another post relating to Kasparov that will appear here soon.

Well, it also comes down to what's going on in the position. Short of resigning or putting something en prise, there's no quicker way to consign yourself to defeat than by attacking when your position doesn't justify it. I win many games by waiting for my opponent to do just that.

Petrosian said something to the effect that he won games by just arranging his pieces properly and then his opponents would start playing like Chigorin. Quite so.

You have a valid point too Justin, of course, but I still hold that the lower down the elo list you go, the more scope there is for individual interpretation and 'style'.

When I say 'down the elo list' I would include most of us at club level in this category. I give you Robin Haldane as Exhibit A :-)

Well you might consign yourself to a theoretically lost position but that's not always the same as actually losing.

No, there is no difficulty *playing* in any chess style. The difficulty is winning with that style!

Up to a point (or more liely a lost one) but I hold that at club level, games are far more often lost than won, and I think deciding to attack without objective reason is the most frequently employed way of going about it.

Re: Robin, I've sat next to an awful lot of lost positions that he's not actually lost....

I looked at a book recently which I think might have been by Nunn. The advice he gave was that if you feel you want to play a particular move that looks good, instead of wasting time analysing all the variations, just check the move doesn't lose and then play it. I think this advice would help me as I think over-analysing often leaves me short of time.

It can be good to make a move quickly to put one's opponent under pressure. Then it's their clock which is ticking (and you can think in their time).

You're right - that advice is in Nunn's Secrets of Practical Chess.

His point, I think, is that once you really want to play a move you're unlikely to talk yourself out of it. What you may do is 'create' some analysis to justify the move.

Hence - play the move and save yourself the time.