Or, the year before last in Marienbad. Babula (IM) v Horton, Marianske Lazne 2006, two years ago this week, position after White's 33rd move. 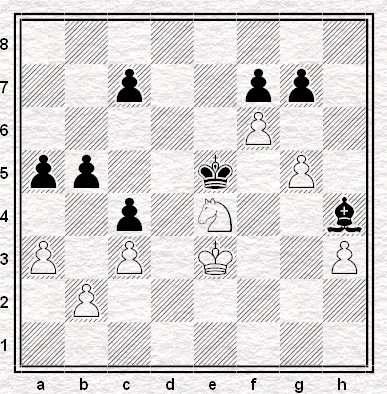 Quite likely the closest I've ever come to beating an IM: Black has two choices and I chose the wrong one. I'm not even sure, in retrospect, that I spent any time considering the right one: I just took off the pawn on the assumption that I was winning the ending, and found that I was not.

33...g6 seems to clean up in short order: 33...gxf6??, as played, apparently does not. Indeed, after we were left with a pawn apiece on the kingside, and I noticed that I had to put my king further out of the way in order to capture his, than he had had to in order to capture mine, I thought for a while that my carelessness might have lost the whole game rather than just half a point. (Though a pretty big half-point, as half-points go.)

I remembered the ending just the other day when going through Andrew Soltis' Why Lasker Matters and looking at Lasker's game against Tarrasch from the first stage of the great St Petersburg tournament of 1914. In that game Tarrasch, who had also been winning, had a similar bad moment. (Note: although this is the position after Black's 39th move in the gamescore, Soltis mentions that some repetitions have probably been omitted.) 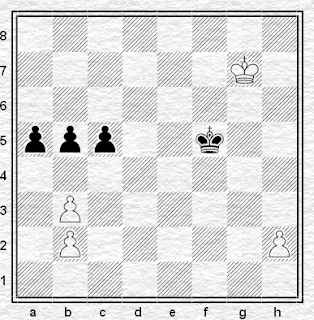 Soltis (via Rokhlin) quotes an observer who described Tarrasch's embarrassment on having to find an exact line to save an ending that had, just before, seemed to be easily won:

Doctor Tarrasch's face was covered with red blemishes. He asked for an official and demanded absolute silence in the playing hall.

One careless moment, careless because everything seemed to be over, and everything changes. I don't often find myself sharing mental space with Siegbert Tarrasch, but, briefly, in the Czech Republic, two years ago this week, I think I did.