I had a lousy last weekend: flew in for the 4NCL only to find I'd contracted flu (real flu, not "manflu") thus forcing me to arrange a very swift draw with White on the Saturday, while on the Sunday, I never came to the venue at all - indeed, I couldn't actually get up from my bed in Brixton until the players in Berkshire were already midway through their second session. (Thanks to my captain, Julien, for finding a sub and congratulations on the result: amazing how much better teams do without me, as meanwhile, my Casino Jaque team in Huesca was getting through a knockout match "despite" my absence.)

Still, at least I was presented on the Saturday with the latest issue of Disinformator, my favourite club magazine, the intermittent house journal of the Oxford City club. There's a lot of good chess in it. But even more importantly, there's a lot of bad chess: a lot of very bad chess indeed. Good chess may, in theory, be instructive, but in practice we rarely seem to improve our chess by studying it: but bad chess is always entertaining and we inevitably improve our mood by playing through it.

Disinformator doesn't disrespect the people whose games it carries: it merely enjoys the struggle all of us have, to hold on to our balance when confronting the impossiblity of chess.

I have many favourites already in the magazine, but here's one example, from a game Hale-Wang, that I found particularly charming. 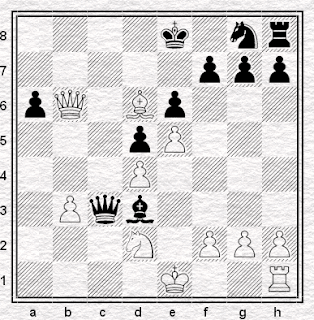 Having got, at the very worst, perpetual or the exchange of queens a pawn up, White, thinking it better to deal with Black's counterplay, meets the threat of 1...Qc1 mate with 1.Kd1.

The magazine is available from Sean Terry on sterry@brookes.ac.uk.
Posted by ejh at 2:50 am