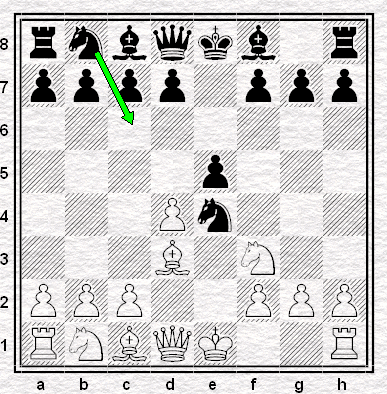 4...Nc6!
If you thought Kutnetzov-Gajewski was surprising, it's nothing compared to Murey's 4...Nc6, a move so high on the made-my-eyes-pop-out scale that you're probably reading this with your eyeballs on the table. In all seriousness I'd wonder whether any move quite so surprising has ever been played quite so early in a serious grandmaster game. 1.e4 e5 2.Nf3 Nf6 3.d4 Nxe4 4.Bd3 Nc6 - how did he ever think that one up?

Murey lost the game, but won the Informator best novelty award. It's still played now and then. I love it.

Wow, that's a real shocker isn't it! What an original conception - worthy of an award. It's a shame he lost the game.

Very nice meeting you all yesterday!

Murey probably was able to make that one up as he loves chess (as well as being super-strong). I saw him at Pula, Croatia get confused over the time limit and lose on time despite no real time pressure in a won position. He was distraught, (especially as the win would have got him joint first) but within half an hour he was back in the tournament hall looking at any random game that was vaguely interesting. Demonstrates a real love of chess.
Andrew

Short-Koneru a few hours ago.