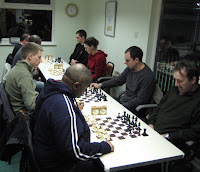 Our Mid-Season Rapidplay Tournament took place on Tuesdays 8th & 22nd earlier this month. The event was a great success with 22 players taking part - so many that some even had to play their games downstairs (see the final photograph in this report.) The event was won by the present writer who scored six out of six, whilst Martin Smith enjoyed lone second place on 4½/6, and Angus French, Jonathan 'B' Bryant & Mohsin Nasr shared third place half a point behind him.

There was also an excellent turn-out from our friends at Streatham Library Chess Club, more than one of whom demonstrated impressive, improving play - as Stan reports: 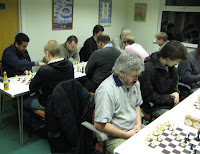 Thirteen players from the Streatham Library chess group took part in the event. Some acquitted themselves really well and all contributed to the general enjoyment of the event. In games where 'library' members met established club players the establishment almost always triumphed but the games were sometimes closer than might have been expected. Indeed, on a number of occasions the library member's defeat remained undecided until the last few ticks of clock.

The library did have it's moments however. Alexey Shumey scored a pair of draws against stronger opponents while Danny Hewitt & Mohsin Nasr ('Naz') went one better in registering wins against main club players. In fact Naz produced a great result by finishing joint third overall, with four points. According to the ratings relied upon for the event, Naz was seeded 14th so his result significantly exceeded his ranking. Well played sir!

Special mention too for Zornitza Chiderova, the only lady to take part. She ended with 3 points but might have done even better but for an error by the trainee administrator, who messed up her colour assignment for round 5. (The trainee in question is highly likely to be replaced by new technology sooner rather than later. Indeed, it probably wouldn't need to be all that new really!)

I can add to that by saying Danny Hewitt caused me a lot of trouble in our round 1 game, which I was lucky to win in the end. From my games, I was most pleased with my win in round 4 against Martin. The game was described as looking like a "grind" by Jonathan B afterwards, although one man's grind is another man's grin. Grind or otherwise, the game was remarkable for one particular moment: the 'spiral staircase' maneuver Be2-d3-e4-d5-e6-d7 that took place between moves 18 & 22, which I am not sure I have ever seen before. 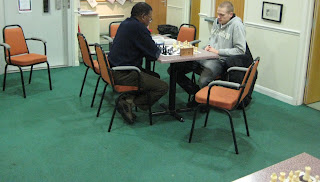 Finally, special thanks should go to organizer & official Angus, as well as to Barry, who looked after the venue & performed a splendid job as barman.
Posted by Tom Chivers at 10:01 am

I'm impressed by the way you systematically wiped out your outpost at d5 - very original strategy.

Has Martin given up the Taimanov then?

Thanks! I kept telling myself it's not what's removed from the board that matters, but what's left on it...

Incidentally, black missed a tactic on move 32 which would have given him the advantage, I think...

Grinding is as grinding does.

I wouldn't say grind and grin are mutually exclusive.

I aspire to be able to grind my opponent into the ground Karpov style ... nurse a small advantage to a full point without allowing any counter-chances. Never manage though.

I should also have said:-

In his report, Stan was too modest to say he was one of those library players who gave a regular club member (me) a very good game in round 1.

Stan totally outplayed me in the opening and middle game but unfortunately for him he ran short of time and blundered towards the end.

I was very lucky to win that one.

I'm defeated by this tactic.

God, how embarrassing. I looked at the capture but for some reason (perhaps because I started looking at an f3 capture followed by a check) I was looking for different follow-ups to the simple rook capture.

I didn't have an inkling that the move was plausible during the game. I played Kf1 to - I thought - rule out any funny busines with the knight...

Shame I missed it. Was this an oversight, or something more profound (?!) i.e. a failure to adjust to a change in trend ( as Yermolinsky puts it in Road to Chess Improvement ) ?
Not that reading his book has improved mine - my problem not his!
Martin.