These we have loved 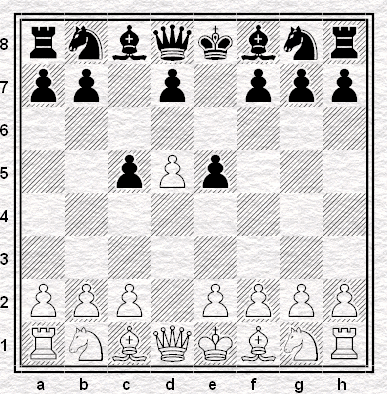 Alekhine liked to play this opening: five times in the mid-Thirties, against strong opposition, including a win in one of his world championship matches against Boguljubow. I read somewhere, possibly in Bill Hartston's old Benoni book, that he referred to his fondness for the position as one of his weaknesses, though I can't recall the exact term he used. I'm not sure what he saw in it: I'd have assumed the idea was to play ...Be7-g5 to swap off the bad bishop, but Alekhine doesn't seem to have played it that way. I have, once, in an email game about a year ago: I lost in about twenty moves to a much lower-rated opponent. I kept expecting the position, with its locking pawn chains, to demonstrate that the computer awarded White a large advantage only because it didn't understand what was going on.

I've always had a weakness, with Black, for openings which offer me a clear idea, which I can try and impose on the game. I don't think it's such a bad way to understand the French, for instance: White sets up a pawn centre, you try to undermine it and keep nagging at that idea for as long as you are able. Perhaps that's why the line that's always appealed to me most has been the MacCutcheon: 1.e4 e6 2.d4 d5 3.Nc3 Nf6 4.Bg5 Bb4. 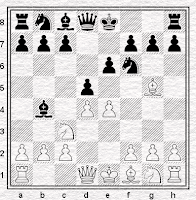 Keep getting after the e4 square until you've made White do something they really didn't want to do: in that way, impose your pattern on the game. It does at least give you a plan. I've played it in serious games a few times, and if I'd ever found anything I liked against the Tarrasch, I'd probably play it more. 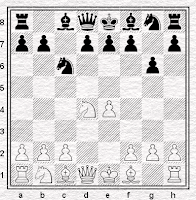 This might not seem like an opening with a particular idea, unless it be to catch White in one of the numerous traps that exist if he or she plays 5.Nc3, but in the event of 5.c4 there's a particular ending which Black tries to reach involving swapping off everything except one Black knight and White's white-squared bishop, which is therefore bad, so Black wins the ending. In all likelihood Black loses well before this ever happens, because White is concentrating on what is happening now rather than on what might happen twenty moves down the track, but I like the idea anyway.

However, I made myself a promise a few years ago that I would give up the Sicilian: and I do not intend to break it for a few more years yet. I shall return to the opening, perhaps, when I am an old man, content to try and win with traps and cunning and keen to get into an endgame as quickly as I can.

After reading Tony Kosten's splendid if eccentric book on the Philidor some years ago, I decided to give the opening a try, and I think I got a draw the one time I played the Hanham Variation. The idea this time is to overprotect the e5 pawn until the time of your choosing: then you put your knights on good squares like c5 and e5 and take over the position. 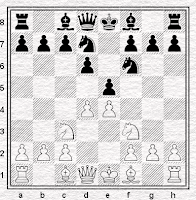 Talking, as I was, of Alekhine, I've never got round to playing his defence at all. Again, it appeals to me because Black appears to be dictating to White, after 1.e4 Nf6: 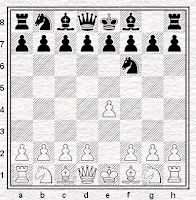 Black says to White that whatever White may choose, we're going to play the sort of game Black chooses, with Black trying to run rings around White's centre.

I never wanted to play the Alekhine's as a main defence against 1.e4, but I've always had the notion that one should have a "spare" defence, something perhaps eccentric, insufficiently sound or solid to play throughout one's career (for what are you going to do if somebody finds a refutation?) but worth studying on one's own and deploying as a surprise weapon should the circumstances permit. The trouble is, I'm not sure I want to study a defence which might be refuted, even as a spare: I can't persuade myself it's worth the effort. Every so often I take a look at it, and wonder whether the 4.Nf3 Bg4 line might be one to follow. And then I find the same theory which persuaded me, the last time, that it wasn't.

I've played the Chigorin a couple of times, though: I liked Angus Dunnington's book from a few years back and I played it in against Keith Arkell in a five-minute tournament at York. 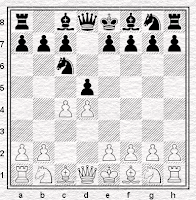 After 1.d4 d5 2.c4 Nc6 he tried 3.Nf3 Bg4 4.cxd5 Bxf3 5.dxc6, of which I was never afraid. He dropped a pawn early on and I kept it all the way into an ending in which I lost on time with knight and pawn against knight when I could, presumably, have claimed a draw. My rapidplay grade was about ninety points worse than his and about fifty points below my normal grade: he may have taken it more casually than he should have done. Anyway, I was impressed, tried it again in a Northumberland League game a few weeks later, and lost in about ten moves. But I still look at it now and again: I've never much liked playing against it, and that always makes me want to try it from the other side.

I always have problems with the Benko: in fact I prefer to avoid it by playing Nf3 on the first or second move. I played the Black side as a kid: sacrifice pawn on the queen side and then play on the vacated files, that was the obvious and successful idea. 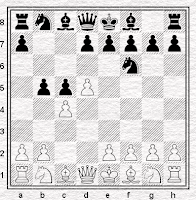 I did well with it, until I played three games with the Black pieces against Dan Rosen*, now of Ashtead in the Surrey League but then an opponent in school matches. He played 4.a4 and after 4...bxc4 he played a line with f4 and a big pawn centre that I couldn't cope with. After that I went to college and didn't play chess for a few years: when I came back I played the Benko for a bit but never believed in it again. I've never really found an alternative I've been happy with, though, and it's another opening which often nags at me and suggests that I might like to take it up again, as my surprise weapon. So I might: but it doesn't solve the problem of what to do if White does what I do and gets out of it with 2.Nf3. 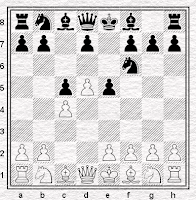 and we're in a slightly more sophisticated version of the 1...c5 2.d5 e5 idea, where White has played c4 thus making that square unavailable to a knight and helping to hem in his f1-bishop. OTB I've only played it once, stupidly, in a simultaneous display nearly thirty years ago: the opponent was Bill Hartston and I was crushed. Still, I have a theory that this might be a good idea in email chess because the computer may not like the closed position. So I can carry out my plan, while my computer-dependent opponent flounders. You'd think that I might learn.

The MacCutcheon, the Chigorin, the Accelerated Dragon, the Hanham Philidor, the Czech Benoni, the Benko Gambit, the Alekhine. All a little eccentric, all with an obvious but perhaps exaggerated thematic point, all, perhaps for that very reason, not entirely sound. But is it not for their imperfections that we love people, too?

[* = correction: having spoken to Dan on Saturday (and subsequently checked my scorebooks) it transpires that for twenty years or so I have been mistaking him for somebody else! My multiple 4.a4 opponent was one D.Levin, not D.Rosen - the only game I can find between Dan and myself from our schooldays was actually a Morra Gambit in the Lloyds Bank under-16. Apologies to Dan for the error.]
Posted by ejh at 10:00 pm

The only opening I've ever really loved as black was indeed a wacky one: 1.e4 Nf6 2.e5 Ng8. I find it much easier to like the white openings! Although even there - my youthful addiction to the King's Gambit suggests it was not for their theoretical perfection :)

I adopted the French partly because I always seemed to struggle playing against it and partly for your idea of trying to impose a 'type' of game on the opponent.

Sometimes I think it was a sensible idea, sometimes I wonder if I really should just go back to 1. ... e5

I've always been fascinated by

and even considered actually playing it for a while but I just can't get over the fact that it looks truly awful.

This last one is the Clarendon Court, is it not?

I also played the MacCutcheon for a bit mainly because there was only a couple of pages on it in my book, but that is 2 pages more than most people know. Eventually I played it against a player who knew more theory than me and beat me (twice). Since then I have played the Winawer which is just as much fun and most (of my opponents) don't seem to know much about that one, either. For years I was put off by the chapters of theory, but so is everyone else, I think.

Yes it is the Clarendon Court. The inventor GM Jon Levitt lived there, when he invented it. I am going to his wedding next month btw.
Andrew