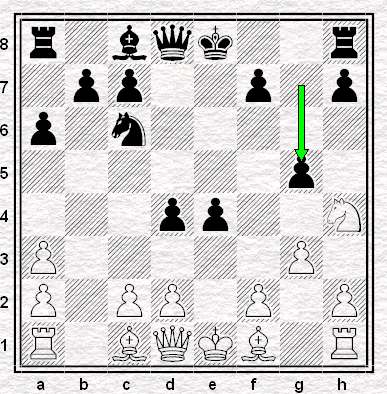 my move 10...g5 appeared in the fifth book of the Secrets of Opening Surprises (SOS) series.

My excitement when I picked up the book and flicked to find Chan-Smerdon, Queenstown 2006 - the game in whose notes the move was published - was, however, short-lived, and quickly turned to shame. Neither my swashbuckling win with the move nor the analysis I'd emailed in featured. Instead, some other move was given returning the piece, after which my idea looked a little more than suspect, and I left the bookshop blushing.

However, David from Barnet Elizabethans Chess Club has had rather more analytical success: his claim to fame being to correct an error in the mighty Endgame Tactics by Van Perlo. You can find the error he uncovered here. "Maybe one day the book will be considered an all time classic," he writes, "and I'll be able to tell the grandchildren about the time I helped to fix it up..."

Any other such claims to publishing fame or shame out there?
Posted by Tom Chivers at 11:22 am

I have a couple of moves in the third edition of John Watson's Play The French.

If I ever finish my series here on my innovation in the Colle, that'll probably revolutionise opening theory too.

Tom - thanks for the shout-out. I imagine that a small amount of traffic from your site will look like quite a lot on ours...

Actually I'd much rather have a TN, even of the "inadequate is..." type, than correct some obscure piece of analysis. At least it's permanent. Years from now, the error that I spotted will be completely forgotten, but everyone will still know that your move is bad ;-)

Ha! & you're welcome David - I enjoy your posts.