No hint of hinterland

The premature death of Bobby Fischer, like the premature death of his chess career, reminds us how difficult it is for chess to have a public image that is both visible and wholesome. Bobby was famous because he was a great player, but he was not famous just for that: his madness and his isolation are what made his death, in the eyes of the public, a real chess story.

As individuals, members of the public may be fascinated by chess, even if they scarcely know the rules. As "the public", they rarely, in the UK at any rate, see anything of the game unless there is something more than the game to read about, unless there is something tasty to serve it with. Danny Gormally fighting over a girl, Nigel Short insulting the dead: these are chess stories. If it's just chess, people are either uninterested, or assumed to be.

Of course it's true that any story will go further if it's souped up with scandal: but while some events are newsworthy in and of themselves, chess is not. Chess seems to need the accompaniment of irrationality and violence and stupidity: perhaps because these defuse chess, demystify it, make unfrightening what was previously incomprehensible. That is how we deal with what makes us nervous - we laugh at it. Art, culture, literature. All the intellectual structure of thought and its application which support these endeavours: these make us nervous and insecure. So we laugh at them. Look at the silly chessplayers!

But that is only half of it, the half chessplayers want to look at. Because Fischer was mad. He was close to madness while he was playing and he descended into madness as soon as he stopped. And we must ask ourselves whether that madness had something to do with chess. Whether the story of the unbalanced mind, addicted to the chessboard, played out in Fischer's unhappy life, was something to do with chess itself, not just the mind of Bobby Fischer. Whether it was not, in fact, a pattern, a syndrome: because if its effects were most extreme in Bobby Fischer's life, we must accept that they have been played out in the lives of other champions too.

Whether, in fact, chess is not some sort of trap for the brilliant but vulnerable, a gradual poison which wrecks the lives of those who are most fond of it, and best at it. Such would be the theme of more than one novel: The Luzhin Defence, The Luneberg Variation, The Royal Game. How closely are those novels related to life? Some years ago Bill Hartston wrote something to the effect that chess did not make people mad, but rather, kept mad people sane. It's a good line, and a better one for there being a great deal of truth to what it says. Perhaps Fischer only tipped over the edge when he stopped playing and as a result: he lost his goal, he lost what gave structure to his life, what made him get up in the morning, what made him work. His obsessiveness lost its grip on something he could understand, something he could grapple with, and instead turned its attention to something he couldn't understand at all: the world outside, the world of people.

Or, perhaps, it was chess which did for Bobby Fischer: too much chess and not enough of anything else. It's not unusual for a professional sportsman to know little of the world outside his personal speciality. You concentrate on one small aspect of life from an early age, you excel at it, you neglect the rest, perhaps because you have to in order to succeed. So you get a warped experience of the world, lived through the prism of whether you have defeated other human beings or whether they have defeated you. A small if fascinating board game, in becoming your life, takes on enormous significance, and you have little enough knowledge or experience of anything else to help you put that game in its proper perspective. The game itself becomes a vehicle for promoting one's own ego and self-image - not just now and then, not as one of the mildly unhealthy vices that it is healthy for us to have, but as one's whole life and purpose. There are more than a few chess professionals who are trapped inside that particularly sterile cage. 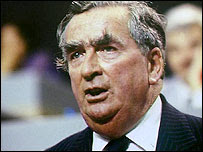 Denis Healey called it "hinterland". Living, as he did, in a world of full-time professional politics, he had many colleagues, and many adversaries, who knew only the world of politics, its ins and outs, its machinations, their own travails and careers within that world. It was destructive: you had to be able to step back from it, not just in order to look at it properly, but in order to remain a fully-rounded human being, rather than a machine playing a part in a machine.

Hinterland: many professsional players seem to me to lack it, top players more than most. Bobby Fischer, who declared "life is chess", lacked it more than any of them. It means culture, the art and literature to which I attached chess earlier in the piece, but from which the game is too often detached. To me chess is a component of a wider cultural education, one part of the process in which we stimulate our intellect and our curiosity, our ability to appreciate, our ability to think. To take chess on its own is to lose the capacity to say why we do it, because we lose the capacity to say what it means.

Why do we play chess? To crush the other guy's ego? What meaning is there in that, what values may we locate within it, what aesthetics does that process possess? There is nothing to be learned from treading on other people. One may play chess for that reason. One may play better as a result. One may even become world champion. But one cannot in that way enhance one's life and personality by means of chess. And the ego that we crush will eventually be our own.

I can't help feeling that chess is at fault here, in some capacity, that Bobby Fischer killed himself using chess as his weapon. That chess doesn't just keep mad people sane, but like morphine to an addict, it creates its own addiction, its own obsession, and ultimately an overwhelming one. It is most addictive to the people least capable of dealing with it: and they are least capable of dealing with it because they are good at playing it. We can see Bobby Fischer as an extreme example: we can see him as an unrepresentative example. But can we really see him as no example at all? As irrelevant to explaining what can happen, when one gets too involved with playing chess?
Posted by ejh at 9:10 am

Ah, good point, I've corrected it. And the funny thing is, I saw him in person only a couple of years ago, going into the National Gallery while I was coming out.

I agree with Hartson that chess probably kept Bobby sane. The question is why did he give up ? Maybe it was the media attention and intrusion into his life - after all he made a major issue of TV cameras in Reykyavik. I think he also preferred being the underdog rather than the champion.
As to his "erratic behaviour" you have to consider his early development (not on the chessboard !) before he started playing chess and also why his education was neglected.
Whatever the reasons, Fischer will be remembered as one of the most significant figures in chess history who was responsible for enlarging the chess community more than anyone else and also writing (probably) the best chess book ever (My 60 Memorable games) - not bad for someone with no education !

Very well said -- especially the parts about the value and purpose of chess and its place in culture and the rest of life. Thank you.

Insofar as he wrote it, of course.

I don't agree with this (seemingly universal) line that Bobby Fischer was mad (after 1972, at least). I agree that he had some quite appalling political views, but that isn't usually counted as grounds for madness.

The claim that he was paranoid doesn't really hold eater either, those Russians really were cheating/ out to get him, as it turns out. His periods of imprisonment were either on the grounds of mistaken identity or because the Americans were trying to extradite him for trade/tax reasons and a little paranoia on these grounds would seem reasonable.

His reclusiveness after 1972 was his own decision and a similar route has been taken by some other public figures: again, hardly grounds for describing him as mad.

No, Bobby Fischer was just an individual who was incapable of compromise. This ended up creating lots of problems for him as well as others. It's a great loss to all of us that he didn't defend his World Championship, but in the end: that was up to him.

Hm. How then is chess different from any other occupation, sport, or hobby that demands high intelligence and absolute focus at its highest levels? I think it's exactly the same. One difference you might point out is that chess has a much lower barrier to entry than almost any other "obsessible" occupation - it's basically free. So many people play it who would be flatly forced out of many other competitive situations. But that would go to the putatively deleterious effect chess has on the average Joe (who should be spending his time with family) and would have nothing to do with Bobby, who was a genius. You might as well argue that mathematics is a harmful discipline because Godel starved himself to death. So, no, I don't think your argument is persuasive - you would have to convince me that chess players are more competitive than other people, or that there is something special about chess itself that turns uncompetitive, normal people into obsessive wankers. But I haven't seen that. It's just not that uncommon for high-strung, Asperger-y geniuses to end up going round the bend.

Well, the question is whether the casualty count and the incidence of dysfunctionality isn't higher among top chessplayers than among the other disciplines you mention. My concern is that it may be, although of course, the issues I raise are not particular to chess.