A Speedy Start to the New Year? 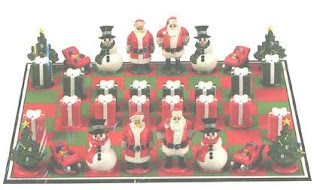 If - like me - your Christmas comprised slouching about on sofas, nowhere near a chess board or the internet, opening another bottle here, forgetting about an opening trap there, cracking another cracker next, drowning yet another brain cell moments after, munching turkey sandwiches after turkey sandwich - then, you're probably a bit out of practice, and starting to worry about a blunderful start to the new chess year through your bleared-over eyes. But, never fear...

... because to revitalize your chess for 2008, the Mid-Season Rapidplay Tournament is here! Open to members of Streatham and Brixton Chess Club (never too late to join!) and Streatham Library Chess Club, the event will be held over two Tuesday evenings on the 8th & 22nd January at our home venue of Woodfield Grove Tennis Club. Entry is free, with the tournament consisting of three rounds each evening starting at 7.30pm, 8.30pm and 9.30pm - & those wishing to play should contact Club President Angus French.

Now if that format sounds familiar, it's because last year's Club Championship was exactly the same. That event I advertised then as Your Chance To Beat Me: something Robin Haldane & Adam Fysh-Foskett wasted no time in doing, as you may recall from the half-way & final reports. Something else you might recall is that - somewhat remarkably - that tournament featured no draws whatsoever. If this tournament is anything like that, it promises not only a speedy start to the New Year, but a very exciting one too.

I hope to see you there!
Posted by Tom Chivers at 4:12 pm