How is Topalov pronounced?

Like many expatriates who become accustomed to the proper pronunciation of a different language, I often find myself wincing when I hear English renderings of Spanish names. Zaragoza, for instance, is frequently mangled - the z is th - even on announcements at its airport. I must have heard the name Ballesteros hundreds of times on English television and radio without realising that the ll sound is more like a English y (think Mallorca). I put most of the blame for this on Peter Alliss, who I propose to refer to in future as Peter Ayis.

It should be easier, I think, for an English person to pronounce Spanish words correctly, than the other way around, given that one of the languages is phonetic and the other is not. At least if we're provided with the right spelling, we shouldn't have to guess, as the Spanish are obliged to when confronted, for instance, with an English word that ends in -ough. As it happens, I have a very difficult name to pronounce, because the dg sound which we use for j is absent from Spanish and the h is always silent. I never know whether to introduce myself as Justin or as Hoostin and I usually end up saying both. People probably assume my real name is Justin Justin.

Another problem is that we do not pronounce all the letters in our words, while the Spanish do. Failure to understand the essential laziness of English pronounciation makes it entertaining to listen to football commentators trying to pronounce the names of English football teams by pronouncing all the letters in as elongated a fashion as they are able: Lyeevearpoool is a favourite and Tot-ten-ham another. Tot-nm, I tell people. They do not listen. (They do however overcompensate by leaving out the word United from Manchester United. Which is rather better than the common English habit of leaving out the word Manchester.)

But I digress. It's not just Spanish words that English people commonly mispronounce, for no better or worse reason than that nobody's ever told us the right way to do it. The Spanish language, as I suggested above, has an advantage over English in that respect - there are clear rules for pronounciation, including which syllable is to be stressed, and if a word exists which does not obey the usual rules, then they insert an accent to tell you that. For instance, a word that ends in a consonant, other than s or n, should normally be stressed on the final syllable - like ajedrez, for instance. But sometimes it's not: which is why there's actually an accent in Ruy López. And there is, apparently, an accent when Topálov appears in Spanish. 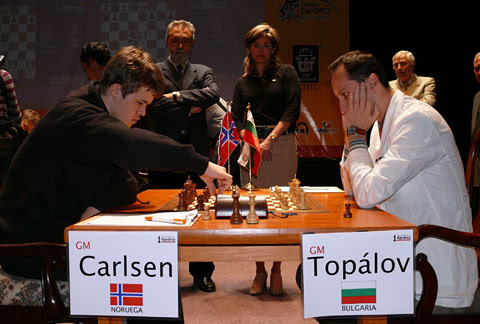 Which is news to those of us who are used to pronouncing it TOP-a-lov, i.e. with the stress on the opening syllable. Nor is it good news, since unless they are getting it wrong then we have been mispronouncing the name of the erstwhile world number one and quondam FIDE World Champion for more than a decade.

But what is the correct pronounciation? Topalov's Wikipedia page - the one in English - tries to tell us, but even if I understood what it was trying to tell me, Wikipedia is not so definitive a source that I'd take its word for it. (It doesn't help that his Spanish page omits the accent.) Meanwhile the influential contemporary authority "somebody on the internet" reckons (first comment on page) that the stress is indeed on the second syllable and is then almost immediately corrected by the next poster but one. So I tried emailing VeselinTopalov.net for a definitve opinion but as yet there is no sign of any assistance from that quarter.

TOP-a-lov? To-PAL-ov? Toe-PAL-ov? Or something else entirely? I do not know. My phrasebook is of little help. If any readers are able to give, or direct me to, a definitive opinion, I would be glad of it. And then perhaps we should ask ourselves how many other chessplayers' names we are in the habit of mispronouncing. For who knows how many others there may be? 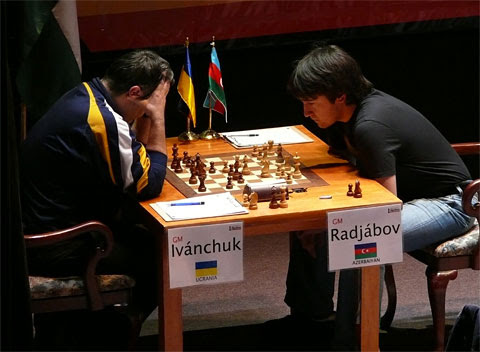 [photos from Chessbase]
Posted by ejh at 7:35 am

My intuition as a native Russian speaker certainly suggest To-PAL-ov. It is not inconceivable that Bulgarian rules are different from Russian rules in this regard, but if anything, this should weigh heavily towards To-PAL-ov (there is a Russian surname Iv-a-NOV and a Bulgarian surname Iv-A-nov).

As for the other picture, I know for a fact that it's I-van-CHUK and not I-VAN-chuk, as the Spanish accent would seem to imply. Radjabov is correct there.

depends with an accent some people speak differently so it's same pronunciation with names!

It's difficult to explane lith letters, but the correct is: Top'A'lov (with hard "A")
Best wishes: Diyan Kostad'i'nov ;)

So the P belongs to the opening syllable?

While I'd be interested to know the Bulgarian pronunciation, I don't agree with your implicit premise that this is 'correct' and that the English (or Spanish) should be expected to follow suit. If TOP-a-lov sounds good in English, that's good with me.

(Likewise I'd have no respect for an Englishman who insisted on referring to the French capital as Pa-ree. Or, to take a chessier example, when did you last hear 'Alekhine' pronounced in a way that the man himself might recognise?)

It's an interesting question, but I think the answer is that normally we do try to render names as they are rendered in the original language, where those names are personal rather than, to use your example, place-names.

It's not quite clear to me why this is and it's also unclear to me why we anglicise some place-names and not others. But to some degree it's maybe possible within a small world such as chess to correct a misapprehension and get it right - so why not?

Finally got round to asking my wife's best friend, who's Bulgarian.

It's definitely pronounced Top-AH-lov, as you thought. But what's more surprising though is that it's Vesel-IN, not the more natural (to an English speaker) VES-elin.