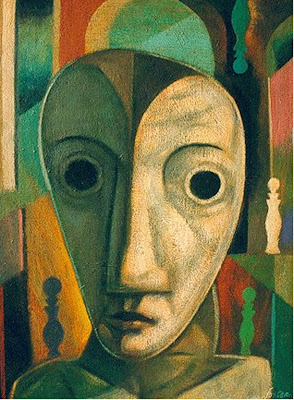 This chess player has stepped out of Picasso's brothel in Avignon. Same mask face; same blank eyes. But the mask is two, one white, one black, facing each other off(white has a small space advantage), head to head in the battle.

The face stares but doesn't see us (because, perhaps, absorbed in the moves), and we can't penetrate those dead eyes to see what he/they is thinking. This picture is about the interpersonal psychology of the chess player and their spectators, not, as in Chess in Art IV, the game itself.

The geometric/cubist background appears to borrow from Les Demoiselles D'Avignon, too. Though not the chess piece motifs: one, white and taking a female form, steps forward (a dream image breaking through from the unconscious?); the black piece sinks back and doubles as a keyhole to peep through, maybe. The green pieces hang between, with the top one, upside down, ambiguating as one or more faces in profile, like the mask itself.

But this was painted almost a hundred years after the Demoiselles; and decades after the heyday of surrealism. There are no cool Jungian archetypes as in de Chiricho, and no overdetermined Freudian symbolism as in Dali at his overexcited priapic height.

For me it's an arresting image, but not a profound one. A grandmaster draw, not a brilliancy.