There are more questions than answers... 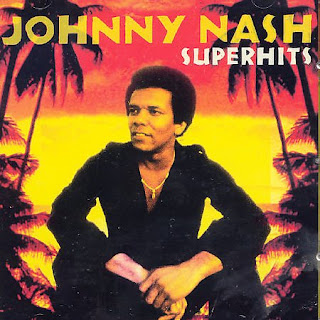 So sang Johnny Nash in 1972, evidently unaware of such fundamental algebraic concepts as over and underdetermined systems. There is a long and noble tradition of outright lies in pop music (it is eminently possible that I might have seen something like the Mighty Quinn, for example, and I am not entirely sure that Chairman Mao 'dug' repetition, either), but usually that wonderful catch-all excuse, 'artistic license', is more than acceptable. Not so here. At the risk of almost vindicating Mr. Nash, however, there are indeed more questions than answers in this post. It's a close run thing, mind, and as much as Tom might argue otherwise, this blog probably ought not to be taken as a microcosm of the real world, where there remains far more answers than questions.
Two weeks ago, in a review of the first volume of the Duncan Suttles trilogy Chess on the Edge, I posted five interesting positions that could be found within the book. They were not tactical or positional exercises as such, more a collection of flashpoints illustrative of Suttles' tendency to play moves that one would never expect. I had promised to reveal all within a few days, and then promptly failed to do so. So for those of you still wondering, here are the solutions: 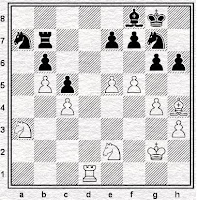 a) Suttles - Letic, 1981. 31.?
This was the real stumper; not one poster got even remotely close to the answer. It is not surprising, for Suttles played the extraordinary 31.Ng3!! After the natural 31...g5 there followed 32.Bxg5 hxg5 33.Rd8. Harper and Seirawan describe this as an 'absolutely pure positional sacrifice', the aim of which is completely bind up black's position. As the authors point out, this is already beginning to come to fruition: Letic has but one piece move which does not lose material (33...Rc7). For the conclusion of this highly imaginative game, go here. 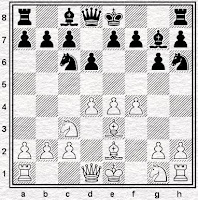 b) Schulman - Suttles, 1965. 6...?
The answer here is the decidedly un-Suttlesy 6...d5. Given that Duncan once wrote that 'Most of my opening strategies are based on control of e5 and I rarely play ...d5, even though sometimes it is the best move', it is difficult to understand. But then again, can't we say that for all of Suttles' play? In the game Schulman wisely chose 7.e5 over 7.Nxd5 e6, followed by 8...Nxd4, or 7.exd5 Nf5. 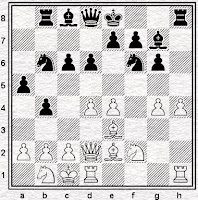 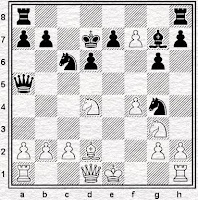 d) Filipowicz - Suttles, 1964. 15...?
This one's a rarity - an 'only' move with deep psychological impact all the same. The solution is 15...Ne3, which Harper and Seirawan assign two exclamation marks. 'The notes in Chess Chat give this a "?!",' they write, 'but since Black's alternative is to resign, that hardly seems fair!' 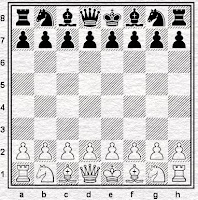 e) Suttles - Schmid, 1975. 1.?
1.a3, of course! Play continued with 1...d5 2.Nf3 g6 3.b4 Bg7 4.Ra2. Nuff said.
And now, some new questions. Below are six chess-related quotations which are far from well-known. For a bit of Friday 'fun', I would like to invite you to put a name to each quotation. Some clues: a) belongs to a Victorian aesthete; the author of b) was punched live on television in the early 1960s; c) was uttered by a Surrealist; d) originates from a 1976 NME interview; e) is perhaps the most obvious, especially if you're au fait with French existentialist footballers; and f) was said to Jacob Bronowski in the back of a taxi.
a) 'In painting and poetry the workers scorn analysis, and the best work defies it, and, so far as chess is capable of analysis, it is neither art nor play.'
b) 'My own enthusiasms are numerous and mostly long-rooted. Like other people's, some grow greater with the passage of time, and some recede, though some which appear to have vanished are only lying dormant; I used, for instance, to play a lot of chess when I was young - it was indeed a passionate enthusiasm - and have only played a handful of games these years past, but whenever I have taken the pieces out I have instantly felt all the old excitement and pleasure, the eagerness to start and enjoy.'
c) 'Chess is a game where the most intense mental activity leaves no traces.'
d) 'I don't appreciate a band that likes to play chess in their off-stage hours. If you have to spend a lot of time with people who are interested in their chess boards and little card games and shit like that, it can drive you nuts.'
e) 'You cannot be a great player without being intelligent... In one second, you have to imagine a lot of possibilities and decide immediately... It's like geometry in your head. Sometimes, there are 60,000 people in the stand and you give a good ball to somebody to score and nobody could see the ball.

Why? Because you have something special and can read things nobody else could. Maradona was like Kasparov. He could see 10 moves ahead. Platini was like a chess player. So was Cruyff. So is Zinedine Zidane. It is about creativity. I don't like people who say: "I paint so I am an artist". You are an artist if you create something.'
f) 'Chess is not a game. Chess is a well-defined form of computation. You may not be able to work out the answers, but in theory there must be a solution, a right procedure in any position. Now real games... are not like that at all. Real life is not like that. Real life consists of bluffing, of little tactics of deception, of asking yourself what is the other man going to think I mean to do. And that is what games are about in my theory.'
Posted by Morgan Daniels at 12:52 pm

Quote (b) is from the pen/mouth of satirist/journalist Bernard Levin and (e) is from footballer/actor/philosopher Eric Cantona. Those are the easy ones I fear.

When Eric is comparing Maradonna to Kasparov has he in mind the "didn't let go of the knight honest" incident against Judit Polgar? Perhaps he had done but the hand of god was still on the piece.
Andrew

a) might be an Oscar Wilde in unwitty mode.

b) is, of course, obviously, Bernard Levin, whom I'd not heard of until moments ago.

c) Duchamp is the surrealist most associated with chess quotes, so I'll plump for him.

Very interesting, Tom: somebody has already suggested Oscar Wilde to me off-site. It's not correct, I'm afraid - just like your answers for c) through f). Duchamp is the obvious answer for c), but I'm afraid it's one of his mates instead. You kinda need to think a bit more avant-garde for d). The good Prof is right about Cantona - that one comes from an interview in the Guardian if I remember correctly. And as for f) - what would the taxi driver be doing in the *back* of the taxi? Who's driving?

It's not Suttles either, Justin - in fact I should warn you now that none of the quotations belong to established chess players. I have to say I do very much like the idea of Suttles and Bronowski having a chin-wag in the back of a London cab.

Well done on Levin, Prof: that one comes from his sweet book 'Obsessions', in which he basically just talks about all the things he likes. There should be more books that, especially if they're authored by someone as gifted as Levin. And to say you hadn't heard of him, Tom? It's as if you have no interest in That Was The Week That Was whatsoever.

That was a very different Levin, though, to the pompous ass he later became.

Can there be anything more asvant-garde than Paul McCartney was in 1976? I suppose I shall have to guess Rotten, J. Would (a) be Ruskin?

Actually, I suppose the outlines of ther pompous as are already very visible in TW3. Highly talented pompous ass, but pompous ass nonetheless.

I have an alternative answer if it's not Ruskin, but I suspect I should only have one guess at a time. Let's have a pop at Edward de Bono for (f), shall we?

Justin - yes, Ruskin is correct! It comes from a letter to Henry Bird, of all people; see here: http://www.chesshistory.com/winter/pics/cn4466_ruskin.jpg

I dug that one up for Edward Winter a couple of years ago.

Bah, don't know what's wrong with that link. You need to add a 'n.jpg' to the end of that.

Still at least both Ruskin and Levin could write coherent English, which is more than I can do this evening. (Can't play coherent chess today, either. I need a drink.)

Oh, and it's not de Bono. Clue one: think about who might be coming up with theories about games. Clue two: the second world war was still going. when this was said.

For quote (f) (even before your hint) my first thought was either von Neumann, Morgenstern (spelling?) or Nash.

BTW, though obviously I have no proof of this, my guess for (a) in the Suttles quiz was indeed Ng3, because it was the craziest move that had some kind of logic behing it. However I didn't have the right follow up (preferring Ne4 to Rd8)

i have the book on my shelf, one of my favorites but dont need to look it up from reading it 32 years ago:

was this not Jacob Bronowski, but Bronowski in his Ascent of Man quoting game theory ('Game Theory and Economic Behavior') founder Eric Von Neumann, whom he said was 'the brightest man' he 'HAD EVER MET?'

campion/transformation: Very well done - it was indeed Von Neumann. And yes, it is indeed from Ascent of Man: it's towards the end, when Bronowski is is discussing being in the back of a London taxi with Jonny, who was talking about game theory. Bronowski, being a keen chess player, said 'You mean games like chess?' - to which Von Neumann replies with the bit in f).

Man Ray, bravo. It wouldn't have been Bowie - there are a fair few pictures of him playing chess on film sets and things.

I know this. it's Frank Zappa. Consequently I've boycotted all his records even the one he made with Beefheart.

Talking of chess/music connections you may(?) be interested to know that the new Half Man Half Biscuit album 'CSI: Ambleside' contains a song called 'Bad Losers on Yahoo Chess.' Its on youtube.

Very good, PG! Why have you boycotted all of Zappa's stuff since Hot Rats, pray tell?

CSI: Ambleside is damn good. But then, it *is* Half Man Half Biscuit, right?

I don't own any Zappa. Truth be told there's something rather annoying about him. The Zappa/Beefheart record was Bongo Fury (1975).

I own no HMHB either, but try to keep in touch with what they are up to. If they release a nice chunky 2CD best of to celebrate 25 years I'll buy that.

Ah right, fair play. I was just being pedantic y'see, given that Beefheart sings on one track on Hot Rats.