A Pair of Sunday Puzzles

"500 Master Games of Chess. Love it," commented PG about Tartakower & Du Mont's classic, having perused a certain picture of my cat-occupied chess books. "Went through the lot when I was about nine. It made me the player I am today. (Take that any way you wish!)"

The way I took it was as an excuse for a dawdle down memory lane, and flicking through the falling-out pages I re-encountered this old position from Rubinstein - Hromadka (1923), where it's white to play. The killer-move that white unleashed is implied in the text below, so take a little while to try to solve this one before scrolling down: 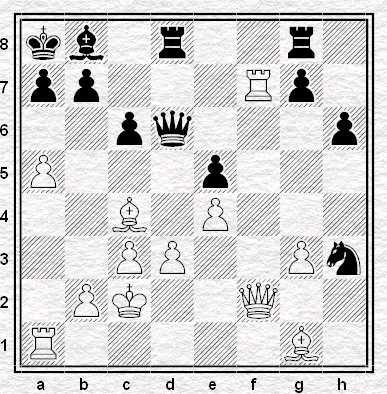 Puzzle 1:
White to play,
and pounce.

. . . which in turn reminded me of something else entirely different. In this position (Young - Kittsley, 1902) from the neighbouring book Chess Middlegames by Laszlo Polgar, it's white to play, and - supposedly - win: 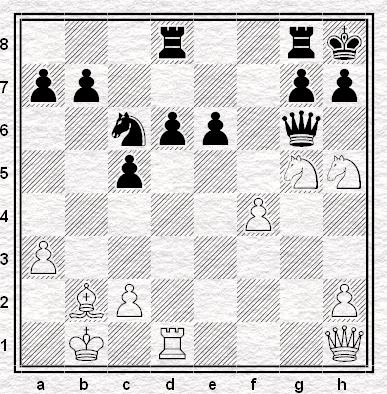 Now assuming that you've solved today's first puzzle, you'll see that the connection between today's two positions is more, of course, than their geoegraphical proximity on my book-shelf. It's that both feature the queen wafting into an attack on herself in empty space, but with devastating effect on the opponent's position. Quite the manouver: so regal, so aloof, so final, so beautiful; something of the feline about it, certainly a motif deserving its own name. Except, alas, in this second position after 1.Qe4, black has a far more satisfactory defence* than those offered by Polgar, after which white is at best equal. Puzzle 2 today is for you to fish that one out.

does Ba6 work for the first puzzle?

don't know for the second one.

Fame at last! Puzzle one I know. Puzzle two is tricky. ...Nd4 and ...Rd7 seem natural but White appears to still be better.

Any answers for the Suttles puzzles, especially the first one which is still baffling me.

1... Rd7 is my intended solution. Maybe white still has a bit of an edge though, I'm not sure. I think if 1...Nd4 then swap queens and Nf7+xd8, although actually black will have three pawns for the piece, so maybe even that is not so clear.

What a nice shot that is Richard! Thanks, I'll amend the post.