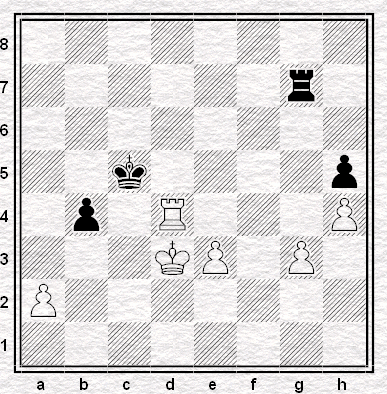 I'm not sure how long I've been playing email chess. The first games for which I have a record began in November 2000: I can remember beginning a tournament some months before, but I was obliged to withdraw due to serious illness and never completed any games, so presumably no records exist of the moves I played. Anyway, I have played quite a lot of tournaments in the eight years since records do begin. And finally, last month, I managed to do what I had never done before. I won a tournament outright.

I have shared first place a couple of times - including, as I recall, one IECC tournament in which all the games were draws apart from one player who defaulted, giving all the remaining players joint first place on a score of +1. But this is the first time I have actually achieved sole, undisputed first place. I think I would probably retire on the spot, were it not for the fact that, as is normal in correspondence play, I am already playing in another tournament and have been doing so for some months.

I am most unlikely to win that tournament, or indeed to remain unbeaten in it, which is a shame since my current unbeaten run in correspondence play now stands at eighteen games. The last of them, which won me the IECG tournament CB-2007-0-00172 - how those letters and numbers will resound through history, a bit like AVRO 1938 - took almost exactly a year to play. A short time indeed by the old standards of international postal play - but in these modern times with instant communication, a pretty long struggle, and substantially the longest that any game I've played has lasted.

My opponent, the Russian Oleg Tkachenko, resigned last week: my penultimate game finished early in December, at which time I was awaiting a reply from Russia to my move 39. Resignation came 29 moves and nearly seven months later.

The diagram shows the position after Black's 53...Rg7. White is two pawns up but cannot protect the g-pawn. And although he can win the h-pawn, it is not at all clear that by doing so he can win the game. What manoeuvre did he find - one that the computer does not - which did lead to a win?

The answer is in the game, which is given below.

(And with that, I am off - well, I'm off tomorrow - to Benasque. Here is a video from last year's tournament.)

I play electronic chess at RHP. Nominally computers are not allowed there but it seems a fair proportion of those who win tournaments are subsequently banned.

There is one player there who is known to have a BCF in the 160s who is currently playing well over 100 games at the same time and has a huge rating (i.e. comfortably above 2200). Do you think he might be silicon aided?

My conclusion: I'm not sure taking correspondence chess seriously is worth it unless you're prepared to use a computer. Of course you then have to know when to ignore it - as you did.

Maybe. But it's not impossible for a decent-strength club player to play correspondence chess at a much higher level, and it was possible even before computers. Moreover I don't think the rating system in correspondence chess corresponds, as it were, exactly to that in force in OTB chess, - you can really only make accurate comparisons within systems and not between them, not when they don't overlap. (So bear in mind that, say, 2150 on RHP is not necessarily going to be the same strength as 2150 on IECG or IECC - and perhaps not even close.)

That said, of course computer use is going to be rife on sites which don't actually permit it, not least because so many people don't realise how easy it is to be detcted. (Like the maths students who have this foolproof way to win at the casino and never ask themselves how come it is that nobody else thought of it first.)

I don't play serious email chess on non-computer sites because I want to use a computer, because of course my opponents are going to be using one. It may seem like a challenge, to play yourself against the computer, and good luck to anyone who tries it, but I found that what happened was that one error would spils weeks and months of work. No challenge, just a letdown.

It should be said, by the way, that this unbeaten run began not very long after I got a program installed. But it should also be said that anybody who thinks you win correspondence games simply by turning on your computer is never going to get very far. (In fact - and I don't know if I've said this before on here - I've wondered if anybody's ever created a sock puppet identity to play as a computer, deliberately selecting every move the computer favoured without exception, just to see how they fared. My guess would be, not all that well.)

It's very easy to get too tied to computer assessments, and even if you reject them for your own move you can easily not see a good response for your opponent because it's not what the computer reckons is best. (I think I've done this in the current tournament, for instance - perhaps out of a lack of confidence, if you look at the respective gradings.) But if you ever feel you're making a move that you're uncomfortable with, because the computer likes it, you're probably making a mistake.

I've actually thought once or twice about doing a post about some of the the strong English correspondence players one sees on, say, the IECG list, yet who don't figure on the FIDE or ECF lists. They interest me not because I think they're simply using their computers, but because, as I say above, I think they're obviously not just doing that. Are they ex-OTB players who gave up years ago?

Incidentally, years ago I wrote my MA thesis about chess and information technology, and I concluded that while it was useful to the amateur player - easy access to information - for the professionals it just created more work, because their rivals would have computers therefore they would have to and so everybody would just be running harder and harder to stay in the same place.

Much the same applies to high-level CC, or, frankly, even the level I'm currently trying to play at. To succeed you have to work hard not just at the screen (or more than one - if your rivals have got more than one program, perhaps you need more than one too!) but at the board in order to improve on what you've seen. Frankly this is more time than I've got, or ever will have, and for that reason I may pack up before too long.

There's a guy who lives in Alto Aragón, David Lafarga, who is rated 2245 OTB, but who recently got his GM title from the ICCF. I met him a few weeks later and congratulated him: he said - if I understood him fully - that he was going to have to stop (I'm not sure he meant permanently, or entirely) because it was just so much work. Which is interesting, really, since CC used to be particularly favoured by people whose business commitments didn't give them time for OTB!