Improve Your Chess I: Why Coach Others?

Yesterday I wrote that in the season just gone I managed to make a leap in my standard of play, and that this week I intend to explain the different things I believe helped me to do so. This is the first of those posts.

I finally took the bait. Can you teach me? What advice do you have? Your play is awesome - please show me how you do it? I'd been saying I was too busy. Or not a good coach. Or not good enough to teach. Or thanks, but my play is really nothing special. Or whatever, as these requests meandered in, but someone or other made me laugh and I thought I saw some real potential in their play: And so I finally took the bait, and on the great all-round chess site Chess World I set up a coaching game with them (there is a superb facility for this there).

I found I enjoyed it - the dispensing of advice, the appreciation that came in return - and in no time my pool of students had swollen, 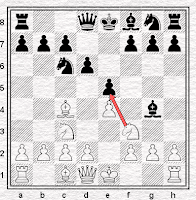 I was trying to explain about doubled-pawns here, opening principles there, checking for checks and captures, recommending books on basic tactics all over the place, setting tests about pawn-structure undermining that no-one understood, and generally failing to teach anyone anything, as evidenced by the complete lack of increase in any of my students' grades over the following months. (I did manage to almost teach one student Légal's Trap, and was feeling pretty proud of the fact until he captured on e5 in the diagram to the right.)

Eventually my enjoyment turned to puzzlement. Why was I such a bad coach? I had no answer, shrugged, and accepted another invitation to a coaching game, where I found a grateful beginner asking me for any general basics about how to play the game. Of course, I thought, and went to paste a link to a long list of basic chess wisdom I have discovered, no longer on-line but similar to the 100 Tips for Better Chess that can be found here[link lapsed]. Once again I scanned the list and found myself nodding at the sensible advice - after all who could argue with things like:

Mm. What if you're behind in material, and in a cramped position? Does it depend on whether you're under attack or not? Mm . . . I wondered what on earth I thought I was doing. Was I really suggesting he thought through each of the 100 pointers in each position he encountered, working out which mattered and which didn't? Could he really learn effectively about chess with such a cluttered vocabulary? Without looking at positions? And not only that, am I really claiming that the game of chess can be understood properly by such wordy descriptions? Are such simplifications really 'useful lies' or is that just plain patronizing? Can I really say to him, Here Is Chess Understanding, and point him in that direction? Can anyone else truthfully make that kind of claim?

Whatever the answers, coaching enabled me to rethink these issues in terms of my own game. I realized I tended to think too much in words at the board, and that one of my problems in the middlegame was confusion as a result of too much verbal thinking. Little wonder that the middlegame to me seemed less bequeathed by God, as the phrase goes, than by a demon. I would like to say it helped me "clarify" my views on chess, but actually I would say the opposite: it helped me disclarify my view on chess, in particular abandoning the simplicities of various mantras we teach beginners, the mantras we try to make ourselves believe in order to feel vaguely competent amongst the vast mysteries of the game. At the board for me, I suddenly realised I had a tendency to treat the game as made up of "parts" - small advantages and disadvantages that accumulate, dissipate, interact - than to treat the game as a "moving whole", as, say, those playing romantic-style chess or prophylaxis-based chess did. The foolish win of a pawn and lack of sense for the overall "spirit" of the resultant position in the game featured here from a few years ago is a reasonable example; this game from a tournament on the Sunday just gone offers a more recent contrast:

[I'm afraid the internet has deleted this game. It was game 3912 on chesspublisher.com]

Anyway, that is one way that coaching others helped me: the sheer fact of having to try to explain chess concepts forced me to rethink them afresh, and in doing so I discovered various problems of my own.

However, there is a second way that coaching others teaches us something. That is, in doing so we get to see errors-in-action at a simpler level, and so we come to understand our own problems better. There is something of a Russian Dolls structure at work in chess, where the errors of a novice are simple versions of the errors Grandmasters make. Sometimes we can learn more about the nature of errors in chess by looking at them in miniature rather than at massive scale. This is something coaching provides. It is easy to imagine various plausible lessons one might take home from coaching that fit into this picture: you can see players play positionally well, but collapse amidst tactical complications. You see opening specialists play perfectly until the middlegame, when they fall apart. And so on. My point is that we are familiar with all sorts of errors in chess, but by trying to really help someone sort out theirs, we get a far better feeling for what those errors really are and how difficult they are to overcome. And in doing so, we can turn our learning back on ourselves.

In tomorrow's piece about advice I intend to provide an example of this. (I consider advice linked to coaching, but different.)

So, my conclusions for today are:
And that's it for today . . . Almost. One more thing. I am implying in all this that the chess coach learns more than the student. Which means that if there's a Grandmaster out there reading this hoping to gain a few more grading points this coming season, they should really consider offering free-lessons to - say - for example - thinking off-the-cuff here - a 186 or so ECF player from south London!

Even when you coach others there is a real difference when playing them. They are reacting, while you are acting.

To me it's live learning a language from a book vs growing up in the language.

Thanks a lot for this Tom, can't wait for the next installments.

It seems to me like there are two very specific (and very important) home truths lurking in today's post. Correct me if I'm wrong:

1. 'the errors of a novice are simple versions of the errors Grandmasters make'; or, the Russian Doll theory. Implied here is the idea that there are so many different 'types' of mistakes one can make at the chessboard, and that witnessing them in microcosm in the games of a weaker player can be very beneficial;

2. that a game of chess ought not to be treated as a bitty, accumulative exercise but as something almost teleological.

I suppose I think that by coaching we get to 'rethink', and that this is both hard to do and useful for us.

Morgan I agree with 1 but 2 I don't like to say . . . there are too many strong players on either side for me to be brave enough to choose!

btw I have added a game to today's post to try help make clear what I am trying to say.

Tom, Congrats on your rating jump! Your just three points lower than me - can't wait for our next blitz chess battle :)

Your play is awesome - please show me how you do it?

Did they really say that?

If not exactly, certainly that kind of thing! Think they might have been stroking the Chivers ego for their own ends?

This blog is really nice for me, Because I love playing chess too. I hope that you will post more and thank you for sharing.

The play through facility for the mentioned game has stopped working. But I found the moves. Here they are: