Going Down to Liverpool 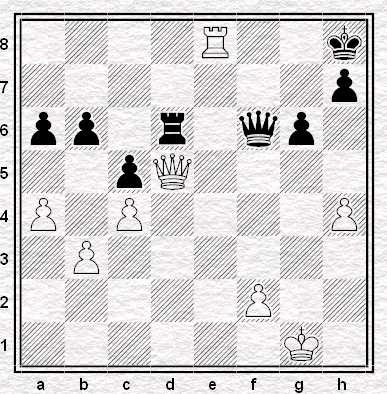 I was going to have another look at my season-ending aberration today but couldn't resist returning to the British Championships to see what was going on.

Three rounds gone already up in Liverpool and the wheat is beginning to separate from the chaff. A tip of the hat goes to Nigel Davies (his connection to the blog escapes me for the moment) who is both leading the tournament and the only guy to have made it to a perfect three out of three. He's playing Mark Hebden (2.5/3) with Black today so will be hard pressed to keep that record up but we shall see.

Hebden, Angus reminded us, used to play for S&BCC a while back as did Glenn Flear who is in a bunch on 2/3 along with Sue Lalic and Stephen of the Ledger brothers. Of other players we're watching Andrew Ledger and Jack Rudd have 1.5 while Tryfon Gavriel, Michael Yeo, Dave Ledger and Venkat are just behind them on 1.

Anyhoo, today's position occurred yesterday in Nick Pert's game against Gregory. White has just played Re8+ and the Black king is going to end up mated ... but on which square?
Posted by Jonathan B at 9:01 am

When practically every other game on the top boards was decisive yesterday, he walked off with a quick draw with the white pieces.

and the round before he had finished in about 20 minutes too.

If I had money on it, my money would be on Gawain Jones, albeit not very much.

I think I'd go

Tom - I know you're not the poet, but are you the Telegraph journalist?

Oh goodness, please not somebody else embarrassing my good name further . . .

Unfrtunately Steve's gone down to Lawrence Trent but Hebden's done for Davies. I thought that game was a draw all the way.

I managed to say White when I meant Black two comments ago. Donner said Prins couldn't tell a bishop from a knight, but I....

Boggie was at it again today - 20 move draw against a player rated 300 points below him. How long can he keep this pace up?

Very close. The mate wasn't forced - it could have been avoided by the giving up of huge amounts of material - but you got the start of the combination.

Bogdan's playing me in round 5. Immovable Object v Irresistible Force, here we come.

Well, I came close to being the first player this millennium to beat Bogdan in the British, but I screwed up. Ah well.

Yeah, I followed that game for quite a while. Who says the Exchange QGD is dull?

I thought it was going well for you Jack . . . did you turn down any draw offers at all?

Yes bad luck Jack. Very hard on you that Boggie actually decided to play that game.

I hope, however, you did offer him a draw on move 8 just to tempt him a little.

Addison should surely have played on a bit against Flear?

Bogdan offered me a draw on move 29.

I bounced back with a win today. Check out this transpo trick:

Good stuff Jack. Francis once demonished me, with black, in about twenty moves.

I have a rule in blitz against stronger players which is, *always take the draw*. In other words, if there's any doubt about winning against a stronger player, be happy with the draw. Still, you're an FM >200 so what do I know.

Jack - I may be missing something, but aren't you just tranposing into a Centre Game, which isn't so great (although I know it was revived quite recently) if Black puts the bishop on b4 rather than playing d6?

I've been away for a couple of days - does anybody know where Sue Lalic missed the win against Jones?

Presumably if you play the Alekhine, you don't know the centre game . . .

...and Horner's not getting out of that corner!