Nor any drop to drink

I had a few strange experiences at the Benasque Open, which included adventures with food poisoning - scroll down to comments at 12:00 - as well as managing to cut open my forehead with my own thumbnail (don't ask). The total quantity of strangeness was not, however, reduced by the team of arbiters coming up with the single most unreasonable request to competitors I think I have ever come across in thirty years' tournament experience.

The tournament takes place in the Benasque Pabellón de Deportes, a sports hall run by the municipality (the Ayuntamiento) for the benefit of the population of the area. Quite properly and sensibly, the Ayuntamiento wish to preserve their building from damage and from the accumulation of rubbish. Not quite so properly or so sensibly, they take this to an extreme - or rather, they insist that the arbiters of their chess tournament do so.

During my first round game, I drank liberally from a bottle of water that I had brought with me precisely for that purpose, being aware that it was summer, it was hot and that in these circumstances, health professionals recommend the consumption of water. I was therefore surprised, at the end of the game, to be accosted by the Chief Arbiter, who told me that drinking water was forbidden at the request of the Ayuntamiento.

Less than amused, I put it to the gentleman that it was hot and forbidding people to drink water was actually potentially dangerous, but he was not to be moved on the subject and so, for the rest of the tournament, I found myself walking outside the hall every time I needed to take some water. Which was often. This was not, most of the time, an onerous obligation, but it might well be, if one were short of time for long periods - not unusual where Fischer clocks are concerned. Or if one were older, or in poor health, and not easily able to walk out of the hall and back at regular intervals. Or, indeed, if one were particularly young. Or, as I mentioned in Wednesday's comments, if one arrived at the board feeling ill and weak following a bout of food poisoning.

It's the sort of instruction that is very easy to issue - if you're making rules in the abstract and not thinking about real people in real circumstances. But I do wonder what any doctor would say about it. Of course it derives from the requirement not to bring food and drink into the hall but I suspect that that rule - a very sensible one - is designed to meet all sorts of other purposes, some of which I've mentioned above, but specifically not that of trying to deprive people of easy access to fluid during hot weather. (What damage the water was supposed to do, what with it being a stain-free and easily cleanable substance, was less than clear to me. I suspect that a few drops of water would do rather less damage to a floor than, say, the 520 pairs of footwear belonging to the players.) 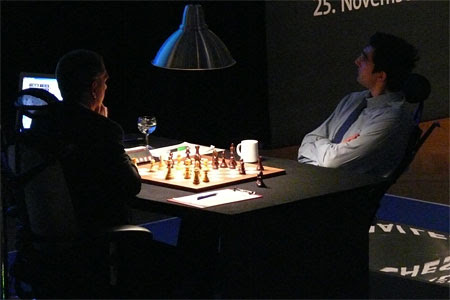 Not that the effort was particularly successful: although the instruction not to drink was repeated over the microphone before one of the rounds, and individually communicated to many of the players, it was widely ignored. I particularly remember Jana Bellin, a couple of boards away from me, having a heated (if you will) midgame altercation with a minor arbiter and subsequently continuing to bring bottles into the playing hall and drink from them.

Rules are important, but health is rather more so: you don't mess about where that's concerned. And stupid rules that nobody will accept and cannot be enforced are worse than none, because they bring the whole fabric of rules and regulation into disrepute. I don't entirely (or even mainly) blame the arbiters here, since they were presumably acting on instruction. But really: I mean these are local people, they know what the weather is like. So who thought it would be a clever idea to make it harder for people to get water to drink - in the middle of July, in Spain?
Posted by ejh at 7:45 am

That's completely ridiculous. Weather is irrelevant. To take away your right to have a drink at the board during a playing session of several hours?? Was this mentioned in the entry form. My solution would be to boycott the tournament. Maybe change the FIDE rules too.

I am vaguely interested in whether FIDE has any guidelines on the matter.

I don't really want to get on the arbiters' backs about it - partly because it's not wholly their fault, partly because I live here - but I do think it was stupid and thoughtless and that it was potentially dangerous.

It's a nice tournament, Benasque, but if they're going to go out of their way to prevent people drinking water during summer weather then I'm going to struggle to recommend it in the future. And if the Ayuntamiento wants to insist on this, then what the organisers need to do is to say well, in that case we cannot organise the tournament and your town's hotels and bars will lose the considerable trade it generates.

Many UK events have a condition that you cannot consume food and drink not purchased at the venue . One supposes this is for commercial reasons to confer a monopoly to the supplier at the venue. None have ever attempted to forbid consumption at the board.

Did the organisers not try to negotiate with the Ayuntamiento? What will they do next year?... How about writing to the organisers to express your concern?

The London League AGM has just voted to ban listening to iPods and other similar devices at the board; not just on grounds of noise leakage and, conceivably, cheating, but also on etiquette/respect for opponent grounds (yep, there is a similar FIDE injunction against means of electronic communication in the playing area).
Call me old-fashioned, but I think eating at the board is also a breach of good etiquette.

I think eating at the board is also a breach of good etiquette.

I agree with that: I also don't think it's necessary. Taking water, different story.

I'm amazed anybody was ever allowed to bring an iPod to the board.

There was a game at Hastings once where both players were listening to iPods at the board.

"... I think eating at the board is also a breach of good etiquette."

I agree ... as is audible (or any other kind of) flatulance - sadly neither this nor eating is unknown at Golden Lane.

"There was a game at Hastings once where both players were listening to iPods at the board."

Yet to see how LL decision will be promulgated, but hopefully it will be broad enough to permit a player on an adjacent board to object to wanton iPod indulgence...
As to flatulence on remote boards, regretably FIDE 12.5 "It is forbidden to distract or annoy the opponent in any manner whatsoever" doesn't cut the mustard if it's not my opponent who is the culprit..

It would be rude not to eat the food that Drunken Knights provide... Borderline whether it is offensive not to bring a drink to the board either ;)